What to Make of Bill Clinton's Behavior 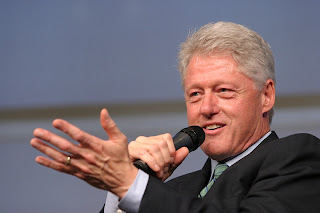 We've seen this tale before. The media whips itself into a lather over Bill Clinton's confrontational behavior on the campaign trail. "Bill Ruining Hillary's Chances," they shout. This past weekend was no different. At a Canton, OH rally for his wife, Sen. Hillary Clinton, the former president got testy with a Barack Obama supporter who razzed him. The man, Robert Holeman, now claims that Bubba made physical contact when pointing his famous finger in the heckler's face.

There's more. At a Steubenville, Ohio rally on Sunday, a protestor near the stage held up a sign that read "Abortion Kills Children," as Bill boasted that his administration successfully reduced the abortion rate without eliminating abortion rights. "We had the lowest teen pregnancy rate since the statistics had been kept when we were doing that. And guess what? Without overturning Roe v. Wade, or trying to keep people all torn up and upset or calling them killers, the abortion rate went down almost 20 percent on our watch," he said. (According to the Alan Guttmacher Institute, abortions dropped to 1.3 million from 1.5 million between 1993 and 2000).
Another protestor shouted at Bill and, visibly rattled, he replied "We disagree with you. You want to criminalize women and their doctors and we disagree. ... If you were really pro-life, you would want to put every doctor and every mother as an accessory to murder in prison. And you won’t say you want to do that because you know that, because you know that you wouldn’t have a lick of political support."

The red-faced Bubba has been doing this sort of thing for months now, since Hillary first rolled him out onto the campaign trail. And the big question is whether all this passion and aggression is helping or hurting her presidential prospects. Personally, I love it. I love seeing Bill Clinton passionate and saying what he believes, without worry of camera, media or criticism. That's the character of a true leader. He's not pandering to anyone, nor does he care if he pisses off the opposition. To the contrary, I believe he actually enjoys it, as he's acutely manipulating them even further out into the open, exposing them for the belligerent, myopic kooks they are. I wish more politicians--yes, even his wife and Obama--had the nerve, the confidence, to actually say what they believe rather that what they think they need to say or are told to say by advisors.

Make no mistake. There's a reason why Bill Clinton is one of the most popular prsidents in our 232 year history. And it's because he always has been and will always be able to connect with Americans the way no other president has in modern history. They believe him, and in him. That he takes no shit on the campaign trail from the angry right-wingers who get in his way only furthers this idolatry. As to whether his antics hurt or help his wife's candidacy, I suspect it has no effect on the Republicans he allegedly offends, and it demonstrates to the Democratic base that he's still a fighter who's not afraid, like so many others, to speak his mind and stand up for himself and his wife. Imagine if John Kerry in '04 or Al Gore in 2000 had done the same. That's why they're losers and he's a winner.


On another note, we could use your help at The The Adrienne Shelly Foundation. We are a tax-exempt, non-profit organization dedicated in my wife's honor to help carry out her spirit and passion, with the goal of assisting women filmmakers. Adrienne was brutally killed in NYC on November 1, 2006. Through the Foundation, her commitment to filmmaking lives on. We've established scholarships, grants, finishing funds and living stipends at NYU's Tisch School of the Arts/Kanbar Institute of Film; Columbia University; American Film Institute; Women in Film; the Independent Feature Project; the Nantucket Film Festival; and the Sundance Institute. Your generous contribution will go a long way towards helping us achieve this very important mission. Thank you.
Posted by The Ostroy Report at 11:25 AM

But sometimes it's all about timing.

Although I will vote for Obama if he gets the nomination, I am one who is not totally sold on him. I fear the "Bradley Effect" with too many folks. Many have said they will not vote for a woman or black man. Yikes!

Both Clintons are racist and corrupt - they'll do and say anything to try to get to the White House. I'm actually enjoying watching and waiting for her final meltdown.

Yes, anonymous, we can all believe you because you so bravely identify yourself.

I never saw Bill Clinton fight so strongly and personally for himself. I'm touched to see him do it for his wife.

Which Anonymous are you talking about?

Oops, sorry, the one who made the ridiculous claims against the Clintons.

You are half-right, which means you are all wrong! People respected and connected with the intelligent, thoughtful, 'I care about you' Clinton. Sorry, but only zealots like Taylor Marsh connect with an angry, red-faced lunatic. I disagree with lots of people about lots of things, but I don't want anybody I know getting in their face and wagging a condescending finger, do you? Really? To me it is rude, small, and bully-like.

Yeah, I'm not getting the Obama phenomenon. He was a pompous ass when he moved to my neighborhood 13 years ago, and, despite the change in cadence and the fake southern baptist preacher accent he's added to his roadshow, he's still a pompous ass.

I certainly didn't agree with all of Bill Clinton's policies when he was POTUS, nor do I agree down the line with Hillary Clinton's positions. But they've always brought the fight to the republicans, and Hillary is one tough cookie. McCain has lost all credibility after embracing GWB, literally -- and Obama -- see comment upthread.

I'd also be angry if I were Clinton. I'd be angry at the witch-hunting, hypocritical Republicans. And I'd be even angrier at the corporate MSM.

Recall, for example, back when The New York Times did a massive, in-depth investigation on Clinton's Whitewater deal. No wrong-doing was ever proven in this non-story.

By contrast, the NYT, as well as the rest of the corporate MSM has snoozed through one Bush outrage after another now for the past 7 years.

From PlameGate to the Downing Street Memo, the MSM has given Bush a free pass on everything (and even worked hard to sell his Iraq War, as well). Now, the MSM is going to bat for Bush once again to sell the idea that the surge is a "success."

Bush is the biggest crook to ever occupy the White House. He is an evil man who has the blood of 1 million Iraq men, women and children on his hands, from his war based on lies.

And yet the MSM has sucked up to Bush from Day One. The same MSM that constantly investigated every trivial right-wing nutcase charge ever made against Clinton.

Yes, I'd be angry if I were Clinton.

HOORAH FOR BILL> I'm so glad to FINALLY see and hear a Democratic show some backbone and passion for what is right. And, I'm tired of pundits on TV whining about "anger" and how distasteful and dreadful it is for Bill to show "anger." What's wrong with anger? Anger is motivation to correct wrongs and provides the energy to do it. I want to see more of Bill speaking out and it would be nice if other Democrats followed his example.

I hope Holeman files charges against Slick Willie and I hope he makes big bucks in a lawsuit as well.

Clinton is no rookie and should know better but both he and his wife Hillary think their shit doesn't stink and don't have to listen or answer to anyone, including the law.
fisco

I agree with frisco. I had the opportunity to shake Hillary's hand in New Jersey. I got a wiff of her breath and almost died. It seriously smelled like she was chowing down on a shit sandwich before she came out to speak. We are definitely going to need government sponsored mouth wash included in any Universal Healthcare law.