Could this be Obama's Big Weekend? 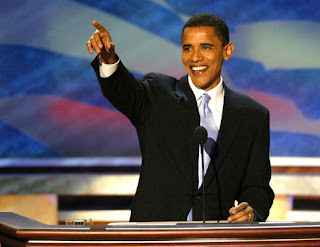 To anyone who knows me and reads this blog it's clear that I am pulling for NY Sen. Hillary Clinton to win the 2008 Democratic presidential nomination. I of course had high hopes that former vice-president Al Gore would've entered the race, but Al seems happier collecting Emmy's, Oscars and Nobel Peace Prizes than becoming leader of the free world. And while I have not been moved by Illinois Sen. Barck Obama the way millions of others have, I could very easily get behind him should he emerge victorious from the campaign.

Let's be sure about one thing: I am a true-blue left-leaning Democrat. Nothing, and I mean nothing, would make me happier than to see these great Unites States finally have a woman or black president. In fact, it's what this country desperately needs; it's time we break free from the leadership stranglehold of rich white men. And this election gives me chills of joy thinking that (a) the Democratics Party will be nominating either Clinton or Obama, and (b) given the political landscape right now, one of them is extremely likely to become our 44th president. Historic, and beautiful.

Which is why this weekend is a most critical one, especially for Obama, whose campaign has shown much strength and momentum. As much as I'm pulling for Hillary (and I know I'm not the only Democrat wishing Bill were back in the White House too), the Washington, Louisiana, Nebraska and Maine contests could be where Obama all but puts it away. By Saturday night, he could be the clear frontrunner. He's ahead in some polling, and he's done well in the previous caususes, and there's three of them this weekend. While many are talking about the February 12 "Potomac Primiaries" in Virginia, Maryland and DC as the next big contest milestone, I believe this weekend is even more important. On the heels of last week's 24 Super-Duper Tuesday primaries and caucuses, Obama could once and for all prove that he's the people's choice to take on Arizona Sen. John McCain come November. And if so, this coming week could be the longest, most difficult in Hillary's political life.

Hillary or Obama. I'd be ecstatic either way.


On another note, we could use your help at The The Adrienne Shelly Foundation. We are a tax-exempt, non-profit organization dedicated in my wife's honor to help carry out her spirit and passion, with the goal of assisting women filmmakers. Adrienne was brutally killed in NYC on November 1, 2006. Through the Foundation, her commitment to filmmaking lives on. We've established scholarships, grants, finishing funds and living stipends at NYU's Tisch School of the Arts/Kanbar Institute of Film; Columbia University; American Film Institute; Women in Film; the Independent Feature Project; the Nantucket Film Festival; and the Sundance Institute. Your generous contribution will go a long way towards helping us achieve this very important mission. Thank you.
Posted by The Ostroy Report at 9:35 AM

He will not be elected president.

Hmmm. Thanks, anonymous, for the great insight above.

I like both Clinton and Obama and will be very happy with either one of them.

When I talk to independents and moderates, I keep hearing they'd vote for McCain if it was McCain/Clinton and Obama if it's McCain/Obama, so the comment above doesn't jibe with what I'm hearing.
Given the current situation, I'm thinking Obama has the better chance.

All in all, I think we're all guessing...

we are all guessing. i am having trouble understanding the interests of a person who is an independent, likes obama's positions on the issues but doesn't like hillary's which are pretty close to each other and would vote for mccain who is way to the right of both if hillary runs. maybe we should reflect on the efficacy of polling lately given some of the surprises there have been and not take surveys of independents too seriously. like andy i will work to elect either of the democrat's but think hillary would be a better manager right out of the gate and is probably as electable as obama.

it is just so disappointing that so many buy into what might be called "anybody but Nader".

in other words, who can best soothe
the masses while maintaining some
sort of status quo whereby the U.S.
and its leaders continue to be above and outside the law and decency.

I find it depressing that the "big idea" of this compaign is that a "woman" and a "black man" are running for president. And, it's even more depressing that we all worry and wonder if a "woman" or a "black man" can possibly be elected. Nothing concerning the job of president is dependent on the gender or race of the one who has that job. Many other qualities are required, but the duties are not dependent on any physical or racial attribute. And, my final depressing thought is I don't think either of them can win the election because one is a woman and the other is a black man.

You are having trouble understanding why Independents favor Obama over Clinton?

Allow me to illuminate.

You are obviously a smart person and well schooled in the issues and then you look at Senator Clinton's experience and think it's a no brainer. Right?

The reason you can't understand is that a majority of Americans end up voting with their hearts over their heads. You're using the wrong organ.

Senator Clinton presents a tough but otherwise unreadable veneer when she speaks. I read recently that she took acting/voice lessons to prepare her for debate. It's obvious to people while they don't realize it. She works hard to project a personality, while Obama just projects his personality. People instictually feel that something is amiss when someone tries to project a personality. Therefore, people who vote with their hearts find Obama more trustworthy.

I think you would understand if someone took a poll of Independents and asked which candidate they found more trustworthy.

As for the issues, I think they are close but I give Obama an edge because of his intention to engage in direct talks with our international adversaries. We need to draw down a failed occupation, win a critical war that we neglected and prevent a couple more from starting. It is going to take direct talks asap.

What is this rubbish about Leader of the Free World? Who has been free under the fist of the Bush-Cheney administration? An ideology which sees no problem with invading our privacy, imprisoning on speculation, which lies with abandon and which is unaccountable to the people... how the hell is this freedom? Even on the face of it the term Leader of the Free World is an outrage. How much of that "Free World" actually got to vote for their so-called Leader? I think the founders of America would have a few choice words to say about the usurpers and tyrants who proclaim themselves Leader of the Free World.

The one projecting a phoney personality is not Hillary so much as Obama. Close your eyes and you think you're hearing Martin Luther King. Obama has stolen King's entire manner of speech and his effective way of engaging others. Obama uses Kings lilt, phrasing and ministerial delivery. He doesn't talk that way in the debates -- in fact he stammers occasionally. The masses are being moved by a Martin Luther King impersonator. Talk about acting lessons -- He's "playing" King.

The contest between Obama and Clinton has become one between the "haves" and "have nots". I wonder why those in trouble think Hillary will be the better advocate for them. Sounds like she better represents the Democratic Party.

Shrillary cries again. How can we vote for such a cry baby for the most powerful position in the world? Does anyone think a crying President might help us in a tough world ?

1o:27 If you are a Religious Right Conservative visitng this blog, remember "Jesus wept."

If you are other, or even an atheist, could it be that you discount feelings and sensitivity in others -- even leaders? The "old cowboy" Bush has gotten teary eyed, as have others. You've seen too many John Wayne movies, perhaps.

The Feb 2008 Scientific American has an article about Global Warming and the Larson B ice shelf that fell into the ocean "on Bush's watch" as Democrats would like to say.

The cracks were observed in November 2001 and it would be clear to any person that can comprehend facts that the ice shelf's damage started well into the Clinton Administration.

Do you want more Global Warming and more of the same? If you do, vote for Hillary.

The Clintons are lying, cheating, corrupt bastards. They are as bad as the Bush Family. Real change does not start with Hillary.

Ill take the "lying, cheating" and whatever the claim is against the CLintons, if they would return us to the prosperity, peace and advancement that we had under Bill. I personally did not suffer nor did other Americans the way we've all suffered under Bush.

One has to admit there are differenct kinds of "cheating and lying." Bill's hurt only himself; Bush's have destroyed the economy and caused the calamities of a war he lied to get us in.

Bush inherited the Clinton recession, so things weren't all kites and flowers when Clinton left the White House.

Your use of absolutes makes your argument false as soon as you published your comment to this blog. YOU didn't suffer nor did other Americans the way we've all suffered under Bush?!? I personally have not suffered under Bush, so that makes your statement false. Other Americans did suffer under Clinton, for example, the women that Bill raped and then Bill, Hillary, and all the Clinton Cronies assassinated the raped women's characters to protect Bill and Hillary's future Presidencies.

Bill also let Al Qaeda attack us 7-8 times without response. He let Al Qaeda practice on soft targets, so he can push the problem to the next President.

Thousands of service men/women suffered when they died or were wounded in the war Bush lied to create,. Thousands of their family members and friends suffered at their loss. Thousands who have lost their jobs, their homes, and their health insurance have suffered under Bush. The list goes on.

Thousands of innocent civilians died because Bill Clinton let Al Qaeda practice attacking American targets and planning to re-attack the World Trade Center. Remember the first WTC attack was also on Clinton's watch. One of the masterminds of the WTC93 attack is the nephew of Khalid Sheik Mohammad.

To quote Hillary's husband, who went to war with Iraq:

"Earlier today, I ordered America's armed forces to strike military and security targets in Iraq. They are joined by British forces. Their mission is to attack Iraq's nuclear, chemical and biological weapons programs and its military capacity to threaten its neighbors."

So if Bush's war with Iraq was such a lie, why did the perjuring Bill Clinton attack Iraq?