U.S. Death Toll in Iraqi Increases. So Much for the "Surge" Success 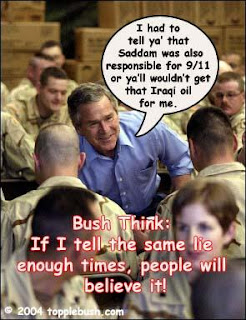 The party's over. For four months the Busheviks got to stick out their collective wannabe testosteroned-engorged chests and brag about how well the surge is working in Iraq. For four measley months the violence lessened and U.S. soldiers' deaths steadily declined. Four months. That's all it took for the lunatic-in-chief to once again mistakenly declare "Mission Accomplished." It's the same old tired story with Bush. His strategy? Just say it, and it must be true, right? Wrong. The U.S death toll reached 38 in January, a 65% increase from December. And the killings spread to Diyala and Ninevah provinces, outside Baghdad and Anbar province, and where the violence against our soldiers has been concentrated.

And while Bush blathers on incessently and deceptively about how "Al Qaeda's on the run" and "Al Qaeda knows the surge is working"...Pentagon officials and U.S. commanders on the ground caution against being too optimistic. Neither knows when we will be able to leave Iraq without the violence increasing.

Any fool knows that sending 20,000 more troops into Baghdad was only a band-aid. That the surge would not and could not stem the violence long-term, nor would it result in any real political change in the war-torn country; change that is critical if Iraq is ever to stand on its own two feet and govern independently and securely. But our president isn't just any old fool. This Bozo never seems to learn from his or anyone else's colossal mistakes. One premature "Mission Accomplished" is just not enough for him. He and his legacy hunger for victory so much that he'll lie about at it every opportunity, hoping that Americans are dumber than he is. And perhaps he's right. An exit poll last week after the Florida primaries indicated that just 14% of Republicans now deem the Iraq war to be our number one priority. Democrats aren't much better at 24%. Man, how quickly they forget. Perhaps Bush is the smart one after all.

BTW, news of the increased death toll came out the same day as the report of a 20% increase in the number of suicides in the U.S. Army; as well as an independent Congressional commission report stating that the U.S. military and our National Guard is woefully unprepared for a catastrophic attack. "Right now we don't have the forces we need; we don't have them trained; we don't have the equipment," said commission Chairman Arnold Punaro.


On another note, we could use your help at The The Adrienne Shelly Foundation. We are a tax-exempt, non-profit organization dedicated in my wife's honor to help carry out her spirit and passion, with the goal of assisting women filmmakers. Adrienne was brutally killed in NYC on November 1, 2006. Through the Foundation, her commitment to filmmaking lives on. We've established scholarships, grants, finishing funds and living stipends at NYU's Tisch School of the Arts/Kanbar Institute of Film; Columbia University; American Film Institute; Women in Film; the Independent Feature Project; the Nantucket Film Festival; and the Sundance Institute. Your generous contribution will go a long way towards helping us achieve this very important mission. Thank you.
Posted by The Ostroy Report at 8:15 PM

from across the pond in Europe we watch closely this year's presidential election in the US through fine blogs like yours (which I've linked, visit me and see if you want to reciprocate).

I've read your previous post and I'd like to ask you a big question: do you think after Tuesday Obama would accept to be Clinton's vice-president in a dream ticket (or the other way round)?

Amazing Ostroy,
You are a big Clinton supporter and you are doing exactly what the Clinton's do. Say it enough times and have your surrogates say it enough and it must be true.

Ostroy The Idiot, Do you still support Clinton? It appears your dream boat, Al Global Warming Scam Gore is about to endore Obama.

Of course, Ostroy the Idiot can support Obama, because everyone knows that Democrats are racist. They like to repeat that Republicans are Racist enough to get people to believe it, yet:

Lets not forget that Bill Clinton had a war with Iraq just 5 years prior to Bush, so in reality you can't say that Bush's war with Iraq is tainted by oil without tainting Ostroy the Idiot's favorite Clinton.

A little bit of twisted history there - no wonder it is anonymous. Here's some facts, from wikipedia:

The Democratic Party traces its origins to the Democratic-Republican Party, founded by Thomas Jefferson, James Madison, The United States Declaration of Independence, [written by Jefferson] speaks of "unalienable rights" to "life, liberty, and the pursuit of happiness", which can be identified as ideals of classical liberalism.

The party faction that supported many of the old Jeffersonian principles, led by Andrew Jackson and Martin Van Buren, became the Democratic Party. Jackson had always attempted a neutral policy towards slavery. In the 1850's, under the stress of the Fugitive Slave Law and the Kansas-Nebraska Act, this became impossible, and the anti-slavery Democrats left the Party.

The Democrats split over the choice of a successor to President James Buchanan along Northern and Southern lines.... As the American Civil War broke out, Northern Democrats were divided into War Democrats and Peace Democrats. Most War Democrats rallied to Republican President Abraham Lincoln......

After ..Reconstruction in the 1870s, and the extremely violent disenfranchisement of African Americans took place in the 1890s, the South, voting Democratic, became known as the "Solid South."

For more than a century, white Southerners had overwhelmingly been Democrats, but in 1948 many bolted from the party...Over the next several decades, the white South slowly realigned from the Democrats to the Republicans

The civil rights movement of the 1960s, championed by the Democratic party despite opposition at the time from its Southern wing, has continued to inspire the party's liberal principles.
==
The Iraq Liberation Act of 1998 (Public Law 105-338) [1] (codified in a note to 22 USCS § 2151) is a United States Congressional statement of policy calling for regime change in Iraq.

In Clinton's address to the nation concerning the four day "war", he closed by saying, among other things:

"Now, in the new century, we'll have a remarkable opportunity to shape a future more peaceful than the past, but only if we stand strong against the enemies of peace."

"Earlier today, I ordered America's armed forces to strike military and security targets in Iraq. They are joined by British forces. Their mission is to attack Iraq's nuclear, chemical and biological weapons programs and its military capacity to threaten its neighbors." - Bill Clinton, December 16, 1998 (Operation Desert Fox)

Hillary is a communist:

WASHINGTON - Democrat Hillary Rodham Clinton said Sunday she might be willing to garnish the wages of workers who refuse to buy health insurance to achieve coverage for all Americans.

Hillary and Democrats are not communists. They just believe that we are to "feed the poor" as Jesus told us to do and take care of "the least of them." with compassionate love and obedience to the tenets of Christianity. What's wrong with that?

I do not understand how you are rabidly anti-Iraq war, yet wildly pro-Hillary.

If he does win California, Hillary will drop out. Just wait and see.

Feeding the poor has absolutely nothing to do with Hillary proposing that the government will garnish your wages if you choose not to buy your own health insurance.

Ostroy,
Now that the NY Giants won the Superbowl, would you like to chime in on how much your city's ticker tape parade is going to cost the Earth due to your boyfriend Gore's Global Warming Scam ?

Garnishing your wages so that you have health insurance is to PROTECT the poor from having to subsidize your illness or bankruptcy when you beccome ill. If you are extremely rich and can afford your health costs no matter what befalls you, then chalk the bit you pay into the universal healthcare plan as your charity to those "less forunate than you." It would be a "star in your crown in Heaven."

The poor don't subsidize anything because they pay zero taxes.

Only liberals think the government needs to be the middleman for charity.

"less fortunate than you" is liberal speak for people who think it is more important to purchase a big screen television, cell phone, microwave, and a car before health insurance.

The top 1% of income earners make 18% of all income revenue yet they pay 40% of all the taxes.

The bottom 50% of ALL INCOME EARNERS are the "less fortunate" and they already pay ZERO TAXES.

Why are liberals so jealous of people who are more successful than they are ? Do you ever look into the mirror and blame yourself for your current situation?