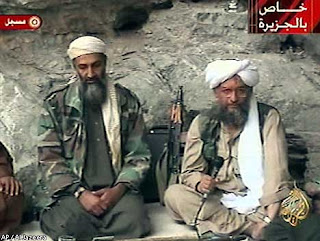 It's a relatively small article, and it looks lost on The NY Times's bottom front page Wednesday amid all the political election coverage. The headline reads: Intelligence Chief Says Al Qaeda Improves Ability to Strike in U.S. And it's scary as all hell.

This is further confirmation of what anyone with a brain has known for several years now: that while President Bush has been recklessy squandering our precious financial and military resources on his misguided, irresponsible elective war in Iraq, our real enemy, the murderous bastards who killed thousands of our innocent citizens on 9-11-01, has been allowed to regroup and strengthen in the mountains of Pakistan, planning their next big attack here at home.

Mike McConnell, Director of National Intelligence, told a Senate panel on Tuesday that Al Qaeda head Osama bin Laden and his deputy, Ayman al-Zawahri, still lead the terror organization and are promoting a new legion of lieutenants and are recruiting new militants, including Westerners (even Americans), with the goal of infiltrating the U.S and attacking domestic targets. Does this surprise anyone? The Iraq war, Bush's legacy, is the biggest military blunder in U.S. history, and has served as a colossal distraction from the war against terrorists. So, what should we expect from a nation that's taken its eye off the enemy? Chillingly, it's just a matter of time before Al Qaeda succeeds.

Senator John D. Rockefeller IV of West Virginia, the Democratic chairman of the Senate Intelligence Committee, has been a vocal critic of the Busheviks' miserable failure in Iraq: "The focus of America’s military forces and intelligence resources were mistakenly shifted from delivering a decisive blow against Al Qaeda, which is the enemy."

That Bush, his inept cronies, and the GOP in general have the audacity and arogance to tout themselves as the tough national security guys--better able to protect us from terror than the "wimpy" Democrats--is absurd and infuriating. Let's hope Democrats use this new testimony to showcase just how inept the Republican leadership has been in truly protecting America.
Posted by The Ostroy Report at 7:46 AM

Anyone who votes for McCain must like the Bush administration.

Also, those of you who say that if Hillary gets the nomination, you'll vote for McCain, are not paying attention. McCain has said he will continue the war and Bush policies. Is that what you Obama supporters want?

Think about it. Keep your eyes on the prize: November 2008

Andy, you really need to wake up. Ive known for years now about the detention camps they have right here in the US, and along with the numerous bills Bush has signed to protect him and allow him to do whatever he wants in the event of the next terrorist attack---martial law is only a few months away. Why do you think these detention camps exist? They're in nearly every state---why? Do you think its for the "terrorists"? Nope. Its for Americans----ones who refuse to comply with martial law. Willie Nelson just said on Monday that he believes 9-11 was an inside job---he's right---he also said the Bush doesnt plan on going anywhere in january '09----the next attack will cancel the elections and we will have that prick for god knows how many more years. Bush signed the bill back in May that basically puts him as dictator when the next attack happens. And remember, this was the party that was supposed to SAVE us from terror------BULL. It will be V for Vendetta in real life----wake up people----fight back. The Constitution not only ALLOWS us to fight back but it says it is our DUTY to. The troops are being trained how to react when the next attack hits----and there was a story recently from a whistleblower (a troop who came back from Iraq) who said they are being trained to kill Americans---even their own families if need be. Yes Andy, this is serious. Ive suspected for 2 years now that an attack would happen to extend Bush's presidency. Coincidence? An attack at the beginning of his term to start the war---and an attack at the end of his term to stay in power longer. Regardless of what you believe, 9-11 was at the least ALLOWED to happen by the government----I personally believe it was orchestrated by them. Who's gained the most from the attack? The United States! The Bush administration! Why was the 9-11 commission a total white wash? It just came out this week that the people appointed to the 9-11 commission were PURPOSELY appointed to have conflicts of interest!! It was done INTENTIONALLY so that nothing hard would be investigated. And look who wrote the Bush doctrine---(the document that says our foreign policy now is to attack countries pre-emptively): Philip Zelikow-----the SAME GUY who was the head of the 9-11 commission. Does anyone have a small problem with that? When we attack Iran----America is over. Be prepared to fight or surrender. Give me liberty or give me death. Thos conspiracy people are looking less kooky nowadays huh??

Andy--the Rockefellers are one of the families that control this whole world. Rockefeller created the Trilateral Commission and the Bilderberger group----which is about the most anti-American entities on Earth. Many politicians and people in media are part of these groups. You need to research this stuff Andy---these are NOT conspiracies---its real. This is not about Republicans/Democrats--when will you wake up and see that these parties are one in the same? Its about the global elite---the Rothschilds, the Rockefellers----people REALLY in power who control the Central banks. Ahhhhh, wake up America! This is why Ron Paul has been silenced and censored----he wants to END all this crap. The people in REAL power control the media to prop up their candidate. Yes we have elections, but they are fixed and controlled-----you may THINK you have a choice----you dont. You dont---trust me---others pull the strings. Ron paul is the most anti-establishment person Ive ever seen, and look how he gets treated. Silenced, censored---left out---do you think this is coincidence? You all keep thinking that these politicians give a shit about you---keep being fooled----they dont care about you AT ALL.

President Bush's efforts have certainly killed more Al Qaeda than Bill Clinton's efforts. We were attacked 7-8 times without response when Clinton was in power. Now you want to put his wife in power.

If you supported the man who let Al Qaeda grow in the 1990's, you shouldn't be allowed to complain about the man that actually started defending America from Al Qaeda.

oh brother!!! Bush has also CREATED more insurgents too! So he gets credit for destroying them when he CREATED them? Im even convince al Qaeda is made up! Its a boogieman----have you ever seen them? Do they wear al Qeada T-shirts?? al Qaeda is really the CIA.

No one is voting for any candidate for the right reason. Americans have stopped thinking, stopped asking questions, stopped protesting, stopped demanding; and stopped looking beyond their own nose. Despite the passive hope, Obama is not our savior. I'm not sure we can be saved.

anon 7:26----exactly right. People come every night from working 8-10 hours, turn their TV on and see who's running---they watch for 5 minutes and decide who their candidate is by the media. The ONLY real candidate is Ron Paul, but since he is against the powers that run the corporations, the media and the world, he is ignored by the very media outlets that are run by the powers that Ron Paul wants to dismantle. This country will be lost very soon and only WE will be to blame because we're so GODDAMNED fucking STUPID! I like what you said about George Washington------it's ironic, Ron Paul is our modern day Washington and looks whats happening to him-----ignored, silenced, censored, villified. If Washington, Jefferson or Madison was running today---they'd be treated the SAME. Unreal, isnt it? And here Andy thinks its a Democrat/Republican issue. The people in Washington are Republicrats----both parties---exactly the same---we will NEVER have change----it will be more of the same, same old, same old forever. Andy thought Al Gore would save us----he's nothing but a fraud. Global warming is real, but its not caused by US---its caused by forces we cant control---and they will tax us for it and make us believe they can end it---they cant---they are lying AGAIN---they will tax us for it---watch. Al Gore is nothing but a New World Order puppet like all the others. Its only people like Ron Paul that can TRULY save us and bring us back to the America we should have---but sadly, we will never have that----because there are powers much higher who pull strings---and none of these powers are in washington. I mean the REAL owners of America. Politicians are just whipping boys----they are people we blame who arent controlling or changing a thing---and they will never EVER care about us----ever

Here's more proof that Democrats are too weak to protect America:

In a coordinated U-turn, US and Russia both treat Iran’s space launch as attesting to a nuclear weapons program


Wednesday, Feb. 6, Moscow followed Washington in voicing concern that the launch of Iran’s Safir-1 space rocket Monday, Feb. 4, attested to the existence of a nuclear weapons program. This diametrically contradicts the US National Intelligence Estimate of last December, which concluded Iran had shelved its covert military nuclear program in 2003.
Moscow too has evidently abandoned its persistent denial of evidence that Tehran is developing a nuclear bomb.
The two comments from the White House and the Kremlin also point to Presidents George W. Bush and Vladimir Putin having settled their dispute over harsh sanctions against Iran.
The two leaders began pulling their acts on Iran together in December 2007, as DEBKAfile first revealed, when Bush suddenly withdrew his objections to Russian fuel shipments for Iran’s Bushehr reactor. Tuesday, Feb. 5, in answer to a question, the White House spokeswoman Dana Perino said Iran’s “space” missile was cause for worry. Such technology, she said, is the same as that needed to deliver a nuclear bomb.
Wednesday, Feb. 6, Russian deputy foreign minister Alexander Losyukov followed suit. He commented that Monday’s test launch of Iran’s “Safir-1 (Explorer-1) raises suspicions over Tehran’s claims of peaceful nuclear intentions and suggested its possible desire to create a nuclear weapon.
It was “of course a cause for concern.” Long-range missiles are components of a nuclear weapons system, the Russian official said - the first time any senior Russian official had admitted to suspecting Iran of underhand nuclear weapons activity.
DEBKAfile’s Washington and Moscow sources report: The statements from the two capitals indicate that Bush and Putin continue to cooperate on Iran and have decided to leave the controversial NIE behind them. The question is: Where does their collaboration go from here? Or, specifically, how does the White House propose to reward the Kremlin for adopting its hard line on Iran?
The place to watch may be Poland and the Czech Republic, where the US president might be flexible in his push for missile interceptor bases in consideration of Moscow’s adamant resistance.