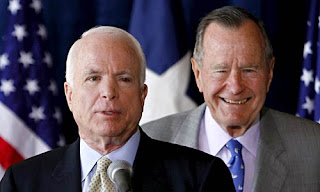 The Republican presidential frontrunner, Arizona Sen. John McCain, not a favorite among hard-core conservatives, proudly accepted the endorsement Tuesday of former president George Herbert Walker Bush. Standing side by side at a Houston press conference, the 71-year-old candidate and the 84-old-year-old former commander-in-chief couldn't have looked more like dinasaurs than if they had been perched on the 4th floor of New York's Museum of Natural History. The contrast to the rock-star candidacy of Illinois Sen. Barack Obama, the Democrats' frontrunner, couldn't be more startling. There they were, just a couple of really old rich white guys who'd love to see the party return to the glory days when another really old rich white guy, Ronald Reagan, first took the White House at age 69.

When asked about McCain's struggle with the party's base, Pappi Bush referred to Reagan, also criticized by the Right during his presidency for being "a turncoat," and likened it to the onslaught against McCain, which he referred to as "an unfair attack." He said that McCain has "a sound conservative record but not above reaching out to the other side."

But just what value will Bush's endorsement bring to McCain in his quest to win over the base? Remember "Read my lips...no new taxes?" Conservatives never forgave Bush for that broken promise. I'm sorry, but getting cozy with Pappi ain't like getting a nod from former House Speaker Newt Gingrich, the 5-star General who led the famed Republican Revolution of the early 90's. In fact, in this week's New Yorker, Gingrich said that McCain's candidacy is "...the victory of the moderate wing for the moment. But I think that's partially due to a collapse of the Delay wing of the party, and secondarily a collapse of the Rove-Bush wing of the party." See what I mean?

To e sure, if Obama does indeed find himself across the stage from McCain during the autumn pre-election debates, it will be like 1960 all over again, when John F. Kennedy looked like a suave, charismatic, cocksure Cary Grant compared to Richard Nixon's sweaty, desperate, 5-o'clock-shadowed Peter Lorre.

And what about Junior? Bush 43. The absolute worst president in history. It's probably safe to say that McCain would rather throw himself under the wheels of the Straight-Talk Express than pick up his endorsement.
Posted by The Ostroy Report at 9:04 PM

I so tire of old white men.

I too have had it with men running this country. It's time for a real change and let a woman give it a go.

Ostroy, you are a flip floppin' flip flopper with your cheering on of every Democrat that has the fawning media's attention. Its funny how so many Democrats could be in love with someone who has nothing to offer but generic words. Here's a pop quiz:

1. What does Obama stand for? And don't say "hope and change." Those are non-answers.

2. Can you tell me two specific policy initiatives Obama has proposed? See if you can get past national health care and higher taxes on the evil rich.

3. Name three Obama accomplishments --- and being elected Senator doesn't count .. there are 99 others in office right now who pulled that one off.

I bet no Obama fan could answer all three questions.

Anonymous 8:38...clearly, reading comprehension is not your main strength. (a) if you actually read what I write you'd know I am a Hillary supporter and, for the most part, agree with you on Obama; (b) that I refer to Obama's inevitability doesn't make me an Obama supporter. It just make me a realist.

Did anyone else notice how perfect Barbara Bush and John McCain look standing next to each other? The perfect Grandma and Grandpa in a pharmaceutical commercial!

The Republicans will rip Obama to pieces and then his naive supporters will finally know what it means to be in a campaign.

Watch the polls. If Obama and McCain are close in November, we will be looking at a President McCain.

Forgive me, but where I live white guys are not going to vote for a woman or a black guy. Naive Obama supporters need to get a clue.

Either 9:51 and I live in the same part of the country, or it's true all over the country that white guys are not going to vote for a black guy or a woman. Already, the white male independents and some Republicans are voting for Obama in the primaries to make sure he's the candidate because he'll be easier to smear in the campaign. The only hope the Democrats have is if Hillary is the candidate and the larger female population supports her. It would be helpful if the blacks then supported her but they may be so angry about Obama's loss that the stay home. Michelle's remark about finally being a proud American doesn't bode well for black support if they're disappointed.

And, of course it doesn't help that GORE is butting in or will at the end of the campain and will urge the super delegates to thrhow the race to Obama. At least I got the feeling that's what he'll do. He and Kerry should keep out of it. They lost and didn't fight back so let Hillary, a fighter, have her chance. Obama doesn't have a chance and even if he did, he's a poor choice for president. All talk and attitude.

The implication that old is bad is what's giving Obama an edge. However, old is not necessarily bad nor new necessarily good.

I think the world would profit if another FDR were available.

Please google "Bradley Effect" to see why Obama will not win.

I think the Democrats are being set up and we will be stuck with a President McCain.

I too feel that we are being set up. The media and the DNC want Obama in the worst way, just watch and listen to the media. Hillary and Bill are bad and Obama is GOD!

There was a great editorial in today's paper by Charles Krauthammer titled The Huckster of Hope. http://www.sptimes.com/2008/02/19/Opinion/The_huckster_of_hope.shtml in it he talks about just what we all are saying. Obama is a slick talker and nothing else, with a "cult" following of sorts. I call it a "flash in a pan" myself.

We are all correct and it is my fear that if Obama is the candidate he will be hammered by the slime machine. There will be stories out on him that will make even his wife turn on him and low and behold McCain will waltz into the WH.

Look, the GOP stole 2000 and 2004 and what makes anyone think they will not do a "hat trick" in 2008. Now that I'm pissed again I think I'll have me a nice stiff drink and hope that the people in Wisconsin turns this around.

I couldn't agree more that we're being setup. The coverage today, alone on MSNBC would confirm that they're pushing for Obama to win. And, he probably will because in Wisconsin anybody can register as anything and vote. The Republicans and Independent will vote for Obama so he'll be the easy-to-smear nominee and then they'll vote for McCain. Where did the Democrats' "smarts" go? They used to be smarter than they seem to be now. Is it too late to stop the disaster?

(Even people on MSNBC who used to be for Hillary, like Rachel Maddow, have now been forced to prefer and promote Obama> Who owns that network?)

WHAT IS GOING ON?

I'm trying to watch CNN and MSNBC to get the election results and I can't take it. On CNN there are five panalists supporting Obama and bashing Hillary with only one person Paul Begala on the panel to defend her. Then I turned to MSNBC and the same thing is happening there. And Keith Olberman is devoting a segment to analyze Hillary's campagin and bash it. The corporate communication powers are running and winning this campaign; They are creating Obama as the Democratic nominee for the Presidency. Who is running this country? What hope is there?

You liberals are silly idiots, but I enjoy watching. I do honestly fear that some day you will convince enough Americans that your utopian lies are possible. Once that happens, the American free fall will have officially started.

Democrats will run the country into the ground. Their promises cannot be paid for without the complete destruction of our economy. The Global Warming scam artists will not stop until our economy is destroyed. We cant use wind power because it kills bats, we can't use nuclear, we can't use oil, we can't use clean coal, we can't use hydro because we have to save the snails

Sure, 11:05, that ineffective stupid idealist Franklin Delano Roosevelt saved us and probably the world when he led us to victory in WWII; he saved our country from the worst financial disaster we have ever known and set standards that protect us to this day; he started social security that has protected our old people (and you who will not have to contribute to your parent's upkeep) since that time. He was by far the greatest president since Washington. I wonder how such a "silly idiot" became such a savior?

10:05 AM,
Its quite interesting that you have to go back 50+ years to find a Democrat President that you would defend.

Its also quite interesting that you bring up Roosevelt. His grandson, Kermit Roosevelt was the CIA agent that created "Operation Ajax". If you are unaware of this, it is only the root cause event that ignited Islamic terrorism.

Thanks to the Roosevelt family and Truman setting the CIA on the mission of committing world wide covert operations to fight the Cold War - we overthrew the Iranian government in 1959. This led to the hostage crisis in 1979 that Carter failed ever so impressively in resolving. Today in the eyes of Democrats, Carter is a foreign policy genius. When he had his chance to make actual decisions, he was a total failure.