Nothing to Fear But Fear Itself. The Fear-Monger-in-Chief Ratchets Up the Terror Rhetoric Yet Again 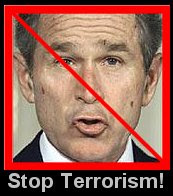 In his radio address Saturday morning president Bush did what he does best: spread lies and deception pertaining to protecting America from terrorist attack. Freshly pissed from the House's failure to renew his tyrannical surveillance law, the nation's top scarecrow delivered his blistering attack on Congress, rife with his standard fear-mongering tactics (excerpted below):

"Good morning. At the stroke of midnight tonight, a vital intelligence law that is helping protect our nation will expire. Congress had the power to prevent this from happening, but chose not to......Some congressional leaders claim that this will not affect our security. They are wrong. Because Congress failed to act, it will be harder for our government to keep you safe from terrorist attack. At midnight, the Attorney General and the Director of National Intelligence will be stripped of their power to authorize new surveillance against terrorist threats abroad. This means that as terrorists change their tactics to avoid our surveillance, we may not have the tools we need to continue tracking them -- and we may lose a vital lead that could prevent an attack on America.... Instead, the House held partisan votes that do nothing to keep our country safer. House leaders chose politics over protecting the country -- and our country is at greater risk as a result."

Bush knows this is bullshit, and he ought to be ashamed of himself for relentlessly preying on the fears of our citizenry. Our national security efforts will not cease nor are they hindered. The FISA court still presides over surveillance requests, and law enforcement agencies can still do whatever necesaary to protect America...just as it did before Bush took office. FISA authorization can be obtained immediately in the event of emergency situations. The difference here is that Bush wants to continue skirting and/or breaking the law, and Pelosi & Co have finally stepped up to say no.

At issue among House Democrats is the Senate bill which passed Tuesday that contained a provision granting legal immunity to telecommunications companies who cooperated with the Busheviks by providing personal data after 9-11. Pelosi and the Dems want more time to work out the kinks, while the Repugs sought to pressure them into House passage this week.

And as for "choosing politics over protecting the country," no one in the last seven years has been more guilty of this than George Bush. He is, without question, the biggest terrorist of them all...


On another note, we could use your help at The The Adrienne Shelly Foundation. We are a tax-exempt, non-profit organization dedicated in my wife's honor to help carry out her spirit and passion, with the goal of assisting women filmmakers. Adrienne was brutally killed in NYC on November 1, 2006. Through the Foundation, her commitment to filmmaking lives on. We've established scholarships, grants, finishing funds and living stipends at NYU's Tisch School of the Arts/Kanbar Institute of Film; Columbia University; American Film Institute; Women in Film; the Independent Feature Project; the Nantucket Film Festival; and the Sundance Institute. Your generous contribution will go a long way towards helping us achieve this very important mission. Thank you.
Posted by The Ostroy Report at 9:18 AM

----you know its funny-----since 2001----all this evidence that Bush knew about 9-11 (or at the very very least, that 9-11 has HELPED Bush) or that our own government was involved in 9-11 has surfaced through shit just like this-----and everyone thinks its just mere coincidence? You admit that Bush is a terrorist but yet he didnt have anything to do with 9-11. Amazing. To people like me (a conspiracy "nut") this kind of shit doesnt surprise me----why does it surprise you Andy? 9-11 has helped NO ONE more than the Bush administration. I dare you to find one person or one group of people 9-11 helped MORE than Bush and his administration!

"Bush knows this is bullshit, and he ought to be ashamed of himself ..."
You're joking, right? Bush has no "shame"
Ron Paul for the Long Haul !!

What I have learned these past seven years is:

-My fellow country folk are much more lost in a consumerist haze of acquisition and fear than I had imagined.

-There is no limit to the extent that the current administration will go to promote unregulated capitalism, greed and selfishness.

-My country which I had once thought might lead the world in building a livable future for coming generations is one of the least likely countries to do so.

-It is quite possible that a wealthy nation can absolve itself of any responsibility to the suffering of others and still believe it is a Christian nation.

Yeah yeah, we're the ones letting it happen if you havent noticed.

I know Democrats are politically locked into US defeat/surrender in Iraq, so I'm posting this to get some liberal underpants in a wad. Democrats need more bloodshed in Iraq.

BAGHDAD, Feb 16 (Reuters) - Attacks by insurgents and rival sectarian militias have fallen up to 80 percent in Baghdad and concrete blast walls that divide the capital could soon be removed, a senior Iraqi military official said on Saturday.
Lieutenant-General Abboud Qanbar said the success of a year-long clampdown named "Operation Imposing Law" had reined in the savage violence between majority Shi'ites and minority Sunni Arabs dominant under Saddam Hussein.
"In a time when you could hear nothing but explosions, gunfire and the screams of mothers and fathers and sons, and see bodies that were burned and dismembered, the people of Baghdad were awaiting Operation Imposing Law," Qanbar told reporters.
Qanbar pointed to the number of dead bodies turning up on the capital's streets as an indicator of success.
In the six weeks to the end of 2006, an average of 43 bodies were found dumped in the city each day as fierce sectarian fighting threatened to turn into full-scale civil war.
That figure fell to four a day in 2008, in the period up to Feb. 12, said Qanbar, who heads the Baghdad security operation.
"Various enemy activities" had fallen by between 75 and 80 percent since the security plan was implemented, he said.
To demonstrate how life had improved, Prime Minister Nuri al-Maliki toured parts of the city on Saturday, visiting Iraqi forces and checkpoints.
"He wanted ... to send a message to the terrorists that security in Baghdad is prevailing now," one official said.
Central to the success has been the erection of 12-foot (3.5-metre) high concrete walls that snake across the city.
The walls were designed to stop car bombings blamed on al Qaeda that turned markets and open areas into killing fields.
Qanbar said he hoped the walls could be taken down "in the coming months" and predicted the improved situation in Baghdad would translate to greater security elsewhere.
The U.S. military says attacks have fallen across Iraq by 60 percent since June on the back of security clampdowns and the deployment of 30,000 extra American troops.
FRAGILE RELATIONSHIP
Vital to the fall in violence was also a decision by Sunni Arab tribal leaders to turn against Sunni Islamist al Qaeda in late 2006 and form neighbourhood security units, which man checkpoints and provide tips on militant hideouts.
However, their relationship with Iraqi authorities remains tense. The Shi'ite-led government is wary of the units, called "concerned local citizens" (CLCs) by the U.S. military and whose ranks includes former Sunni Arab insurgents.
"Everyone should know, that the official security forces represent the country. And it is the one side that has the right to bear arms and impose security," Qanbar said.
In a sign of the tensions, one CLC group said it was suspending its activities after three members were killed in an incident near the town of Jurf al-Sukr, south of Baghdad.
The unit blamed American soldiers for Friday's deaths. The U.S. military said attack helicopters had responded with rockets after security forces came under small-arms fire. It said the incident was under investigation but gave no further details.
The CLCs number some 80,000 mainly Sunni Arabs. Qanbar said Baghdad was working on compensating victims of mistakes by the Iraqi army and multi-national forces in Iraq.
While Iraqi and U.S. officials laud the security gains, humanitarian groups say it is still too early to encourage around 2 million refugees who fled Iraq to return home.
"The plight of Iraqi refugees will end with national reconciliation," the U.N. High Commissioner for Refugees, Antonio Guterres, told reporters during a visit to Baghdad. (Additional reporting by Michael Holden, Mohammed Abbas and Ahmed Rasheed, Writing by Mohammed Abbas: Editing by Robert Woodward)

When its all over, lets please to take a moment to remember that if Democrats were in charge, Saddam Hussein would still be actively stealing money under the oil-for-food scam, he'd still be paying Palestinian families of suicide bombers, he and his sons would still be raping innocent women in their rape rooms, innocent people would be murdered for the entertainment of the Hussein family, we'd still be patrolling the northern and southern no-fly zones while being shot at, ...

Here's some proof that Democrats only care about "every vote counting" when the votes back the Democrat "Do what I say, not what I do" agenda. Do the Clintons really think that people wo uld believe that Barack Hussein Obama would receive zero votes in many heavily black parts of NYC ?

February 16, 2008 -- Barack Obama's primary-night results were strikingly underrecorded in several districts around the city - in some cases leaving him with zero votes when, in fact, he had pulled in hundreds, the Board of Elections said yesterday.
Unofficial primary results gave Obama no votes in nearly 80 districts, including Harlem's 94th and other historically black areas - but many of those initial tallies proved to be wildly off the mark, the board said.
In some districts getting a recount, the senator from Illinois is even closer to defeating Hillary Clinton.
Initial results in the 94th, for example, showed a 141-0 sweep for Hillary Clinton, but the recount changed the tally to 261-136.
As yet, none of the results have been certified, but a ballot-by-ballot canvassing of all voting machines has begun, a board spokesperson said. Many of the mistakes were chalked up to human error -- and some Clinton tallies were wrong as well. In several congressional districts she was shown as having received zero votes when in fact she got hundreds, Boe said.
Brooklyn City Councilman Charles Barron called the understated figures "outrageous."
"I think this is an all-out effort to stop a campaign that is about to make history and render America's first black president," he said. "We need some kind of independent or federal agency to investigate this."icate that she may not even come out the winner - Obama currently has 116 votes to her 118.