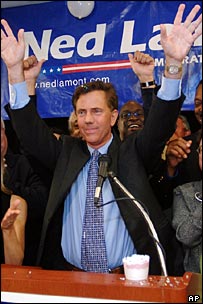 A 30-page National Intelligence Estimate, completed in April and released last week, reported without equivocation that the war in Iraq has fueled violent Islamic extremists; has increased terrorism in the region and throughout the world; and has served as an unprecedented recruitment tool for al Qaeda and other terror organizations. The NIE, titled "Trends in Global Terrorism: Implications for the United States," was prepared by the National Intelligence Council of 16 U.S. intelligences agencies, which is comprised of current and former senior intelligence and national security officials. The findings, of course, are in direct contrast to the progress and success falsely and repeatedly claimed by the Busheviks when framing the war's overall impact on the fight against global terrorism. In short, the Iraq war is a self-fulfilling prophecy; it's created the very beast we supposedly went over there to fight. And if Ned Lamont plays his cards right, it would appear that the NIC just handed him victory on a silver platter.

In the wake of the NIE and between now and November 7th, on the national level, the Party needs to hammer home Bush's colossal failure in Iraq, demonstrating just how dangerous the war has become and how it's making America more vulnerable, less safe and exposing us to terrorist violence more than ever. The party must remind voters of Bush's own recent statement that the war had "nothing" to do with 9/11, thereby drawing the conclusion that the only impact Iraq has had on the global war on terror is to legitimize, mobilize and energize monsters like Osama bin Laden and terror groups like al Qaeda. Democrats must at every turn show how this miserably ill-fated war has given cause and strength to terrorists throughout the world.

In Connecticut, Lamont must use the gravity of this national security threat and build on his anti-war momentum, holding up the NIE as proof-positive that he carries the right message for the his state's voters and for America. That he, not the hawkish and delusional Bush-sympathizer Joe Lieberman, must be sent off to Washington to help guide the nation out of this dangerous quagmire, which has served no purpose other than to squander our precious political, financial and military resources, diverting them from the real fight against terrorists..
Posted by The Ostroy Report at 7:11 AM

Isn't anyone concerned that the Repubs will just cheat (fixing voting machines/suppress the vote) anyway?

I am convinced the Democrats will not "hammer" anything. They will ignore the report or be very placid when mentioning it as was Kerry on Imus in the Morning. And, if, by a miracle they show some fight they will end their "attack" by giving Bush credit for Afghanistan. The only Democrat that has shown passion and anger and spirit is Bill Clinton who is about to be slaughtered by the negative remarks on TV by the Republicans. Condi Rice called him a liar. Yet, no defense from any Democrat, despite Bush's outbursts of petulance when asked embarrassing quesions. These Democrats, except possibly Lamont, are hopeless. Wait and see - they'll soon be on TV apologizing for Clinton.

To 1;51 Things have changed only I havent seen any change.The Republicans are just as corrupt,power hungry,clickish,lyers and the Democrats are just as brainless,down on their knees kissing a-- as ever and their both having a good timeliving high on the hogg off their donations.and the dommies think their going to have an election after the last two were stolen and they still have the idea an electon is all they need to clean up the mess when noneof them have the guts to take them out of office firstbefore election,expect one new guy todo any good in such a hornets nest.
instead of throwing them out and clean up as they commited the crimes, Like lying when the couldnt,didnt read on going to war with Iraq,Didnt know torure was going on --Didnt know Mc Clain was a sell out to Bush when he came up with torure now him and 2 other cut throats now tell you they have a good plan for everybody (let Bush torure as long as hes president}Frist and his helping his medical friends Going along with Bushes Idea to help the rich corp.voting more money to keep the Iraq agoing cant tellme they arent carring water on both sholders.Letting the tv war mongers cut people off when they justdont like what someone says.They all do it.Hillary and her 6000 dollars hair dos.cause she just busting to get it when shes just as bad as joe liverman
There sure is a lot of presidental materal in Washington
Not even worth voting for.

11:31 Come off your phoney act. You're probably Larry who has too much times on his hands.

Anonymous 9:25,
Attributing every post that doesn't fall in line with your opinions to ME, makes you look silly to the person you are responding to.
I didn't even read what 11:31 posted, but can I suggest you try to counter his/her post with intelligence instead of attacks? I thought Democrats are supposed to be for peace through intellectual debate. Try it.

Anonymous said...
This comment has been removed by a blog administrator.
9:58 AM

Larry, just read your post. I guess the reason I think all the nonsensical posts are yours is because you Repugs all sound alike. Is that intellectually insightful enough for you?

It's not intellectually insightful enough for me, but coming from a Democrat I'll assume it's the best you can do.

Of course its not intellectually insightful to you because you have no capacity for introspection.

oh yes, I have "no capacity for introspection" because I don't believe "all republicans sound alike". Now that's "intellectually insightful".

so, if I say that I'm morally against abortion, but don't believe it should be against the law - would you say that I sound like "all republicans" ?

If I say that Bush is spending like a drunken sailor, would you say that I sound like "all republicans" ?

If I say that the war on drugs is a sham, would you say that I sound like "all republicans" ?

YOUR intolerance to the freedom of ideas blinds you. Just because someone disagrees with your political agenda does not mean that the person has "no capacity for introspection". It sounds to me like you may have some problems with your own ability for introspection. Instead of trying to achieve peace through debate, you jump immediately to character attacks.

I would like to commit my Issues
I'm a anti bush the united states
senate should of never believe
that bush said about this war from
the begining from the first place
I have called my us senator from
new york not vote for this war bush
had lied about this war I would like someone from the senate to
stop this offal war that were having, I'm up set with the united
states senate for voting for this
war over there we must fight for
our rights to stop this war and tell bush this is wrong or he to
get out of office I hope that someone bring this commit to wasinton after the eletion

1:15 Me and my frends ripublicans and you must be stopid. bush good priseedent cuz he done give to me and my good buddes a big cut in txes and keep me and my family saf from terorists. This war is good you snivilen demicrap