"Are You Better Off Today Than You Were Two & Four Years Ago?" A Simple Question To Remind Voters of Bush's Miserable Failures 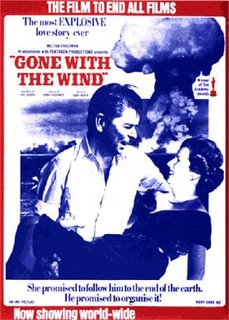 Back in 1980 on the presidential campaign trail Ronald Reagan famously asked, "Are you better off today than you were four years ago?" It worked like a charm and ushered him into the White House in what was the start of Republican-dominated politics for years to come. It was a simple question. And it's one that Democrats should start asking at every truck stop, park, playground, shopping center, school and campaign speech across America. Because the answer is also simple: the country is a colossal mess, and Americans are angry, frustrated and ready for change. Let's remind them why.

We are a nation at war with an invisible enemy who'd like to kill us where we sleep, yet we're mired in a quagmire in Iraq, which serves as a major distraction that's sapping our precious political, financial and military resources. President Bush and his cabinet manipulated intelligence, manufactured evidence, and lied to us in order to justify this quagmire we're in. It's cost $300 billion, almost 3000 U.S. soldiers' lives, and killed tens of thousands of Iraqis, not to mention the tens of thousands of U.S soldiers maimed or wounded.

Because of Iraq, America is less safer. Let me repeat that for the throngs of kool-aid drinking Repuglicans who follow this dangerous president's every move in lock-step: because of the Iraq war America is less safer. Bush has botched the effort in Afghanistan, allowing the Taliban, drug lords and terrorists to reconstitute and rebuild. After years of saying things like "I don't know where he is...ya know I just don't spend that much time on him," Bush closed down the CIA's only bin Laden-exclusive unit, Alec Station, yet 6 weeks before the midterm elections has suddenly become obsessed with the terrorist mastermind, invoking his name 18 times in a 40-minute speech this past week. He's taken his eyes off bin Laden, but not when it comes to helping Repugs retain power. Keeping America safe is secondary to this president. Being a automaton spin puppet for Karl Rove has been his main function.

So while Bush tours the country telling us how well the war in Iraq is going, and why it's so important, the world, and the country, is turning to shit. Here at home, consumer confidence continues to drop. Inflation is on the rise. Interest rates are climbing. Employment is stagnant. Wages are falling behind inflation. Oil and gas prices are astronomical. The trade and budget deficits are at record highs.

And where was/is Congress through all this? They've allowed themselves to be neutered by Bush, Cheney and Rove. You can forgive the Democrats. They're trying to fight the good fight, but it's difficult to exert any muscle anywhere when every branch of government is controlled by your opponents, and when they serve as a shameful rubber-stamp for the president's insane agenda. It is the Repuglican incumbents who must pay the price for throwing their constitutionally-mandated oversight down the toilet when it comes to Bush. They've let him rush to war, ill-equip our soldiers, violate the Geneva Conventions, alienate our allies, incite and marginalize our enemies, mock diplomacy, destroy our economic prosperity, rape the constitution and polarized our nation like never before. And for that, they must be stripped of office.

Go onto any street-corner in America, where the average Dick and Jane live, and ask them "Are you better off today than you were two and four years ago?" Ask them how much it costs to fill their tanks. Ask them when they got their last raise, or took their last vacation. Or whether they both have to work in order to meet their expenses. Ask them about their kids' education. Ask them about healthcare. Ask them about their winter heating bills. Ask them about their sons, daughters, relatives and neighbors who are dying in Iraq. Ask them if they are happy with the way things are going overall. Ask them a simple, highly effective question: "Are you better of today than you were two and four years ago." Let's ask this question until voters are tired of hearing it. Until they run into the voting booths November 7th.
Posted by The Ostroy Report at 8:53 AM

An excellent post, Andy. I suspect that the only Americans who can answer your question in the affirmative are those multi-millionaires who have benefitted from the Bush tax cuts at the expense of the middle-class. Certainly the escalating cost of living while wages stagnate has created a drain on the life style of the average American, and tht does't even address the additional burden of funding the Iraq war. It's time for America to wake up and recognize what this Republican administration is doing to them. I think that is happening, but it's slow, and hindered by the never-ending rhetoric put out by the administration in their efforts to control the country with fear. We must reach the point where we remember that although we may be targets for terrorists, freedom is worth the risk, and the fear-mongering of the Republicans is simply their attempt to maintain their power.

I am not better off than I was four years ago. And for as long as the Republicans remain in the majority in Congress, and control the White House, I believe it will only get worse.

I and my family are far worse off than we were when Bush came in. However, I remember during the last presidential election the right-wing voters said that it didn't matter that their personal situation was worse under Bush because God would take care of them if they continued to fight abortion, I'm new to small town living, but a long-time resident here told me that the poor people here don't want to be identified as the "needy" so they support Bush. Those who live in Section 8 housing (the obvious poor) for example suffer a great deal of disdain from those who don't.

I am so sorry, did you whining little moonbats say something?

I really do feel bad for you that you get no comments. Obviously you're trying, hard, to "make it" as a blogger. I support your sincere effort.

What changed was me and my attitude towards work and money. I decided to pursue money and here in the America you seem to despise that's really all it takes for a poor loser-girl to change her circumstances.

So today, in 2006, I've got nearly a million bucks worth of equities (a million! In the account of a lower-classer who worked as a waitress for more than 20 years! Imagine that if you can.).

But now I see I've got Ostrey to tell me how baaad, nay evil, America and its economy is. Forgive me for not buying into Ostrey's plaintive bleats o'doom.

Sure, Ostrey displays concern for lesser folks like me, but does he really support or endorse our success? Hell no. Poor folk are only useful to Ostrey's ilk if we follow his elitist script and stay poor.

Apologies for my impoliteness, but Ostrey has more than invited it with his simpleton post. I challenge Ostrey's comfortable-yet-inaccurate worldview (or should I say Weltanschauung, just to let Ostrey know that we inferior-folk hillbilly waitresses got us some five-dollar-word vocabularies too, Jethro).

Yep, America and its economy sucks for the mythical poor Ostrey needs to imagine to make himself feel superior. For the actual poor, or ex-poor like me, America rocks.

Poor Loser Girl: One wonders but truly does not care how or even that y ou are now worth millions in dollars. What is your worth as a caring human? I'm sure you, in turn, don't care about that. Peace.

// Viper1 said...
I am so sorry, did you whining little moonbats say something?

no just commenting on that bad haircut, Cheap shades and the sloping forehead denoting bad genetics and inbreeding as well as your ill concieved O'Reillyeasque posts. Your family is from West Virginia...right???

THANK YOU MR. PRESIDENT...THANK YOU FOR EVERYTHING!!!

Oh, here we go again with all the repuplicans spending there time here on Andy's site spreading their BS.

I've said this a thousand times at least but here I go one more time.

Drop Andy a list here of ten things this Bush administration has done in the past 6 years that has helped the average American and remember the tax cuts don't count because they were for the rich.

New reader has shown her true self in just a few posts. Her neocon view is that the only mark of a successful life is money. How small and choked her mind and heart must be.

I happen to come from an advantaged life and have seen the general sickness of spirit many wealthly people function within. More toys, more entertainment, more for me, less for you... I'm rich so I must be smarter and better. Did you see me drive up in my new Benz SUV? These are some of the underlying motivations of the nouveau riche.

The issue here is not poor loser's wealth but her ugly american attitude. She'll think the designer clothes, handbags, and shoes will make her more loved and, more importantly, noticed.
She's crying for recognition just by her posts.

Dear new reader, you have become a poor little loser girl more than you can imagine.

Now, on to more important items of interest.