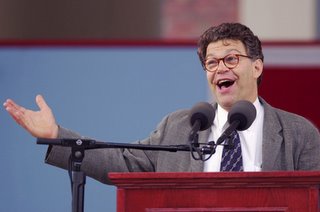 Kudos to Al Franken. On Tuesday's Hardball with Chris Matthews the Air America Radio talk show host, author and political pundit berated Washington Times Columnist Tony Blankley over the conservative's misstatements about the war and his misleading column this week about the circumstances surrounding former terrorism czar Richard Clarke's demotion in 2001. Franken was fired up and relentless.

It all started when Blankley minimized the significance of the Afghanistan war, attempting instead to portray Iraq as the central front in the U.S.'s war on terror, while downplaying the newly released National Intelligence Estimate which said the war has increased, not decreased, terrorist activity in the region. Blankley said that terrorists will "follow the sounds of the guns."

"I don't know what Tony's talking about," said an angry Franken. "We were told that this war would last just a few weeks. Rumsfeld wouldn't plan for after the war. We were just going to go in there, a Jeffersonian democracy was going to emerge in Iraq. It was going to be a model for the whole Middle East. It would put pressure on the Mullahs in Iran and the moderates would take over there, which they would de-fund Hezbollah. That's what we were told, and now were being told that, 'Oh, of course, we're in the middle of the war now, and they respond to the sounds of the guns.' What is that? Of course Afghanistan was the right thing to do, and the world was behind us. When we went into Iraq we did it on false pretenses. This president misled us into war. It was a huge gamble, and he has lost. And the 2700 men and women who have died have lost. And their families have lost. And the 20,000 that have been wounded have lost. And how dare you say...this is just, this is just a complete re-spin of what was said before we went in there. And I resent it."

Shaking his head and smirking, Blankley replied: "Look Al, you should've been reading my columns, and then you'd understand things a little bit better. I wrote a column before the war in September 2002..."

Later in the segment, as Blankley was blathering on with his right wing drivel about the NY Times "cherrypicking" from the NIE, Franken, holding up papers and waving them into the camera as he read, interrupted him to quote directly from Blankley's column this week where he "misled" his readers by claiming that Clarke "demoted himself" early in 2001, rather than being marginalized and demoted by the Busheviks after they took office. Franken accused him of intentionally lying to his readers. The fact is, it was after 9/11 that Clarke, frustrated in his reduced counterterrorism role, requested a transfer to a new NSC office dealing with cyberterrorism. Clarke, who served under Presidents Reagan, Clinton and both Bushes, eventually had enough with Dubya and left government in 2003.

I have never seen Franken more aggressive, and more effective. Bravo, Al.
Posted by The Ostroy Report at 9:57 PM

...and so Bubba's tantrum caused the tide to turn and now others have the fire to start fighting back against the conservative spin/lies machine...

You go President Bill, Keith Olbermann, Al Franken and the rest of you. It is sweet music to our ears and we're behind you..

I saw it and I agree totally with the poster above and Andy.

However, my concern lies with how the Repubs will cheat regarding the voting machines and suppressing the vote.

Are we prepared to fight for the correct vote counts?

I can't wait till there's an available clip of this. Thanks for the post! I think it's crucial for progressives to make some noise. Playing it safe into November is a sure way to lose the race.

Ostroy -- How com it's thumbs up for Franken for an angry defense and yesterday it was thumbs down for Clinton doing the same?

Anonymous said...
This comment has been removed by a blog administrator.
9:57 AM

Deducting the same percentage of taxes from all incomes is not fair or humane. Say, a flat tax of ten percent was deduced from everybody as a mean of simplification and "fairness." Ten percent is a far greater "chunk" of a lower yearly income than for someone, say, who earns $250,000 plus, or even 50,000. THe FairTax suggested above again favors the very rich. You people who want to do in the poor forget that any country is only as strong as its weakest link. And, if I were to go a step further into the area of values and religion, you know that Christians are admonished to "Feed the poor."

with all due respect, what does the tax issue written above have to do with Al Franken and Tony Blankley's exchange last night?

Boortz is not a Republican. He's a registered Libertarian. You know, a party that unlike the Democrat and Republican parties believes in small government and limited spending.

Johnny is absolute right. How dare that nut overtake Ostroy's blog to get to the blog's readers with his harangue on taxes. That is not surprising from someone as obnoxious as he is when he appears on talk shows. And, he might as well be Repububican - he's loved by them as is Lieberman because he supports most of their agenda. And by the way he spued that tax junk on every article still avaialbe on this blog. Talk about rude agression.

Republicans love Johnny too, does this make Johnny Republican?

Call your representatives and tell them to support The FairTax Act (H.R. 25, S 25)

If the FairTax should become law, call your poor mother and tell her to find the nearest "blackmarket" merchant, probably a Republican, so she won't have to pay 28% percent of her purchase in taxes. Don't call your rich uncle - he'll already know where the merchant is. In fact, he may be the blackmarket salesman.

Privatized Government is still government, only you got no power.

If a decision is made that affects your life, that IS Your Government.

If you are charged for the privlige, that is Taxes.

If you have no say in the decision, That is Tyranny!

Think about that the next time your employer changes medical insurance and the new one decides that you don't get your old doctor or meds.

Oh!, and on actual topic hurray for Al, He will make a great Senator. His intelligence and understanding rise above even his AA brethren.

Note that no matter how many gazillion dollars you make you only pay 5% on the first 100k etc., so everybody pays the same taxes.

I will gladly pay 90% tax on my second million I make this year as long as everybody else does too. If we make that second mil of course.

That would be a fair, simple, and equitable tax.

...and what if you are a gazillionaire and decide to take a year off? You pay no taxes that year except earned interest? You can fly your private jet all over the earth, causing more global warming than most countries.

Thank you for sharing your insight freedem. Everybody needs to understand what you say.

The Fair Tax is not fair. The income tax is fair although it now needs revision. Can you just imagine the force needed to keep all commercial transactions legal so that the "fair tax" is collected? That would be more complicated and less effective than the IRS. What is in it for you guys pushing it? You have a bridge you want to sell to dopes who fall for your Fair Tax?

The fairtax also collects taxes when illegal aliens and people who work under the table purchase items. These people NEVER pay taxes under the current tax code.

The fairtax removes the Congressional ability to 'buy' votes and to perform the democratic favorite social engineering via taxation.

Call your representatives and tell them to SUPPORT THE FAIRTAX!

Transactions under the Fair Tax would be like transactions of illegal drugs. Criminal. And look how unsuccessful we've been stopping those illegal consumer transactions. In fact, as we sadly know, many of the law enforcement people become engaged in profiting from those drug dealings. Of course it's true drug dealers don't pay income tax now, but all of that would change if all drugs, instead of just alcohol, were to become legal. Then the IRS could do its job. To solve illegal immigrants not paying taxes - deport.

9:51,
To have any FACTS to back up your incorrect analysis?

To 1:11 -- What the Dems have, very much unlike the Republicans, is the intelligence, experience and common-sense-ability to foresee probable outcomes if certain actions are taken, based on the understanding of cause and effect. I hope you remember how this administration was unable to do that before it invaded Iraq and the hideous consequnces that will cost them the coming election. It's an ability the Republicans should at least try to acquire.

IF YOU SMOKE, YOU ARE RUINING THE EARTH FOR MY CHILDREN.

STOP COVERING UP FOR EACH OTHER

YOU ARE RUINING THE WORLD FOR ALL MANKIND