New UN Report Says Afghanistan Sinks Deeper into Taliban-Controlled Opium Abyss. Coulter, is this What You Meant By "Swimmingly?" 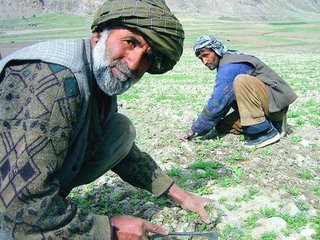 On Fox's Hannity and Colmes recently, our favorite Republican psycho freak Ann Coulter was confronted by guest host Kirsten Powers about Bush's failure to capture Osama bin Laden and about the worsening situation in Afghanistan. Never one to disappoint, Coulter, looking as bug-eyed and deranged as ever, responded, "As for catching Osama, it's irrelevant. Things are going swimmingly in Afghanistan." Commendably, Powers was relentless in her follow-up pursuit of sanity which, from Coulter, just isn't there. The Queen of Mean simply imploded, right on screen, and bolted. You can watch it here. (Powers will be appearing shortly on The Ostroy/DeLaite Report tv show in NYC)

And while Coulter thinks things are just peachy-keen in Afghanistan, the rest of us in the sane world beg to differ. In a startling new United Nations report released last week, drug-trafficking and opium-harvesting levels are skyrocketing, showing an increase of almost 50% over 2005, according to Antonio Maria Costa, executive director of the U.N.'s Office on Drugs and Crime.

Costa, who called the problem "alarming" and "very bad news" for the Afghan government, said that opium cultivation was in large part due to a reconstituted Taliban presence in the South, the center of the country's opium production. Taliban rebels, he said, have been menacing local growers, offering to trade protection for increased production.

"It is indeed very bad, you can say it is out of control," said Costa, echoing concerns by President Hamid Karzai, who's called on the international community to help bolster his country's police and law enforcement agencies.

Let's remember what the Busheviks quickly have forgotten: that prior to 9/11, it was Afghanistan that was led by the Taliban and which served as a base of operations for bin Laden and al Qaeda, the brutal masterminds of the horrific attacks in Washington, DC and New York City. Bush has taken his eye off the country, but the Taliban clearly hasn't. And while Bush has our troops getting killed in the middle of an ethnic war in Iraq--a country he invaded but which posed no threat to the U.S.--our real enemies are regrouping and thriving elsewhere.

Afghanistan's Southern region is in a state of chaos, Costa said. The growing insurgency has left entire areas outside of government control, a situation caused by farmers, traffickers, corrupt police and government officials who are exploiting the opportunity. The increase in poppy production coincides with a marked increase in Taliban attacks. "The southern part of Afghanistan was displaying the ominous hallmarks of incipient collapse, with large-scale drug cultivation and trafficking, insurgency and terrorism, crime and corruption," Costa said.

The new U.N. report comes on the heels of more bad news that first surfaced in late July when Lt. Gen. David Richards, the most senior British military commander in Afghanistan and head of NATO's international security force there, said the country was "close to anarchy," and warned that western forces there were ill-equipped and "running out of time."

Perhaps Lt. General Richards should give Coulter a call. I'm sure he'd love to hear just how swimmingly things are really going in Afghanistan.
Posted by The Ostroy Report at 11:11 AM

Let's be real.
The War on Drugs is an obvious hoax and does nothing but inflate the price.
If you think Heroin production skyrocketing is not part of the plan you really aren't paying attention.
Humans will always do drugs and always have.
The government knows this.The "War on(for) Drugs" keeps the biblethumpers happy,the margins huge and the dealers that are the governments competition locked away for ridiculous amounts of time.

And, if they continue to choose not to legalize drugs, then it must follow that alcohol should once again become an illegal, mind-altering substance. But of cource if all drugs were legal crime would go down as well as profits for those in the "system" who are profiting from illegal drugs just like drug dealers.

Send our kids to this hell hole based on a lie. (911)It is really about the oil CEO's. Then get them addicted to the other oil (poppy)and sell drugs to willing slaves for the rest of their short horrible lives.