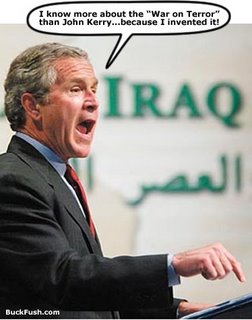 As the November midterm elections rapidly approach, we've seen President Bush, VP Cheney, Karl Rove and other members of the Bushevik monarchy ratchet up the terrorism rhetoric in an effort to scare Americans into the voting booth to pull the lever for Republicans. Just as they did very successfully in 2002 and '04. Except this time the message is not resonating. In fact, the tactic is backfiring.

Americans are smarter, and more frustrated and angry than ever. For over a year now at least, polls have shown dreadful approval ratings for Bush and Congress, with right track/wrong track numbers painting a very grim picture for GOP incumbents this Fall. But what's consistently saved the Repugs has been the perception among voters that the party is stronger on matters of national defense. But that's changed. A Wall Street Journal/NBC News poll shows the Repugs losing serious ground to Democrats on foreign policy, the Iraq war and terrorism, the Bushevik's heretofore bread and butter strength:

Compounding this dismal news for the Busheviks and the GOP is the fact that, according to this week's NY Times/CBS poll, 51% of Americans now believe the Iraq war is separate from the fight against terrorism, and nearly half see it as a major distraction.

And finally, in a new Pentagon report issued Friday on Iraq, the news is even bleaker. The report issued a dire warning of an impending all-out civil war if things do not improve quickly. It highlighted that since May there's been a 15% increase in attacks; a 51% increase in casualties; 1800 Iraqis killed in Baghdad in July alone (with 90% of them having been executed); and Shia/Sunni sectarian violence spiraling out of control and moving North and South of Baghdad. And in what could be the most telling sign of all, various militias, not the government, have been taking over as providers of both security and social services.

So what does this all mean for Democrats in November? For one thing, the Busheviks and the GOP have seen major negative changes in the political landscape over '04: the previous advantages of Bush's popularity, American support for the war, and the stronghold on the terrorism issue are gone. And when you combine this with the Middle East crisis overall, the threat from Iran, sagging consumer confidence, staggering gas prices, record deficits, the bursting housing bubble, stock market declines, and Republican scandal and corruption, the conclusion is simple: if Democrats can't win now, they never will.
Posted by The Ostroy Report at 6:57 AM

The perception of Dems as soft on terrorists will change when people realize the Democrats are the smart ones when it comes to fighting terrorism The morning news reported Scotland Yard just rounded up more terrorists. This confirms what Kerry said years ago: fighting terrorists is won only by police work and intelligence; not by typical warfare with bombs and soldiers.

Johnny thinks he is soooo cool. He is not cool. I bet he is a fat little kid. He probably likes Bush too.

Cathy
From the Great state of Michigan, where millions are lining up for unemployment, becuase Bush sucks.

That sucking sound is coming from Hillary's clam.

On top of everything else wrong with them, Republican men are not only vulgar they are misogynists who particularly hate Hillary because she will not "take her place in the kitchen."

Those with nothing worthwhile to contribute that is to the best interest of anything ...always wind up loudly broadcasting how empty and vulgar their heads are. Try being someone who is willing to offer something helpful and informative for a change. You will find you are more acceptable in your dealings with others in your lonely sojourn thru life. One thing is for certain... your presence will be more welcomed than it is now. Thanx.