New Poll Shows Senate Candidates Brown and Casey Jr. with Sizeable Leads. Is the Senate Getting Within Closer Reach of Democrats? 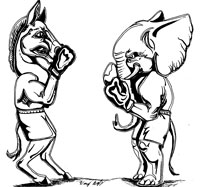 With the midterm elections a mere 67 days away, Democrats in key battleground states are holding their own in leads over Republican incumbents. In a new USA Today/Gallup poll released Thursday, Rep. Sherrod Brown, who's challenging Sen. Mike DeWine for his Ohio seat, is ahead 6%. Over in Pennsylvania, where the third highest-ranking Republican Rick Santorum is fighting for his political life, challenger Bob Casey Jr. leads by a commanding 18%. Republicans spent the last week desperately trying to convince everyone that Santorum was gaining ground on Bob Casey, but these new numbers prove otherwise. In Montana, Jon Tester leads Sen. Conrad Burns by 3%. In polls earlier in August, Sheldon Whitehouse held a 6% lead over Rhode Island incumbent Lincoln Chafee. Lastly, in a hot contest in Missouri, Democratic challenger Claire McCaskill has been back and forth in the polls in a neck and neck battle with Sen. Jim Talent.

The Dem's need six seats to regain control. A lot can and will happen between now and November 7th that can change the landscape dramatically. Additionally, all expectations are that Democrats will pick up the 15 seats needed to regain control of the House. Stay tuned.
Posted by The Ostroy Report at 5:15 PM