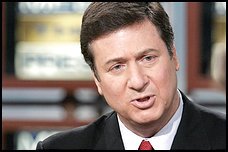 Sen. George Allen of Virginia is in trouble. Big trouble. And he knows it. On NBC's Meet the Press Sunday, he bobbed and weaved as host Tim Russert had him on the ropes over everything from his now-infamous "Macaca" slur weeks ago to his unyielding support of the Busheviks' war in Iraq. It was a veritable minefield, and Allen did his slippery best to avoid practically every direct question with evasive indirect non-answers.

In what could be another major foreshadowing of the Republican Party's mounting doomsday scenario in the November midterm elections, a Mason-Dixon poll conducted this month found Allen's once double-digit lead over Democratic challenger Jim Webb now down to a paltry 46-42%, with a margin of error of 4 percentage points. Statistically, it's a dead heat. And that's great news for Democrats, who need to win six seats to regain control of the Senate. Previously, the tightest battles had been expected in Missouri, Rhode Island, Montana, Pennsylvania and Ohio, with Tennessee and Virginia considered longshots. With Virginia now firmly in play, and SurveyUSA showing Harold Ford Jr. leading Republican Bob Corker by 3 points, the Dems' chances at winning get better and better every day.

RUSSERT: But let me ask you a simple question. If the CIA said in 2003, "Saddam does not have weapons of mass destruction. That is now our--the finding," would you still have voted to go to war?

ALLEN: Tim, we, we made decisions. You can't say, "Gosh," five years later--and this is what my opponent's campaign's about is the second-guessing.

ALLEN: I stand by my vote, and the vote was based on the evidence and information before us. And we had a choice. We had a choice whether to listen to the critics and do nothing, and then have this world more dangerous if, if we were right.

Fascinating stuff, considering that every single justification for the Iraq invasion has been proven unfounded, and that we now also know that the administration manipulated the facts and cherry-picked intelligence in its run-up to war.

Allen is now facing the fight of his political life. Webb is a former Republican; a highly decorated Marine and former Reagan-era Navy Secretary who told Russert that the Iraq war is an "incredible strategic blunder of historic proportions." He said he's lost confidence in Bush's foreign policy, and repeatedly reminded viewers that he and his father, unlike Bush or Allen, had served in combat. His son is currently serving a tour of duty in Iraq with the Marines.

On the war, Russert asked Allen to define "stay the course" and whether or not he would support sending more troops. Both questions brought vague, political answers. Regarding the $300 billion cost of the war so far, Allen was asked if that money could've been better spent in the fight against global terrorism. "We have spent money on all those things. You can't be constantly second-guessing, Monday-morning quarterbacking," Allen said.

But that's just the point. Yes we can, and should. The Busheviks and the GOP leadership are accountability-averse. They started a war of choice with a sovereign nation that posed no threat to the United States. Over 2600 of our soldiers are now dead, tens of thousands maimed and wounded, with perhaps 30,000 Iraqis killed. We've spent $300 billion, created a terrorist breeding ground where one did not exist, and there's no viable exit strategy on the table. And Allen says we shouldn't "Monday morning quarterback?" Given the disaster Bush created, heads should roll, for Pete's sake.

What Webb has going for him is that he's an original opponent of the war. He spoke out against an invasion early on, arguing that the same containment strategy that kept Russia in check throughout the cold war would work again against Saddam Hussein. In a September 2002 Washington Post op-ed piece he warned that American occupation forces in Iraq would "quickly become 50,000 terrorist targets." And he was right.
Posted by The Ostroy Report at 7:15 AM

Remember back in 2004 when Kerry was at the Grand Canyon and he was asked this question? It was then that he asnswered YES he still would have voted for the war was when his chances went out the window. This is the same thing now with Allen and the voters will remember this answer.

All the VA voters need to do is vote for Jim Web a true hero and American. His son is currently serving in Irag.

Just another Elitist, Draft Dodging GOP Racist that has shown his true colors...besides the white Hood that he wears at the Monthly KKKlan meetings.

Time for this slick talking "Macaca Baiter" to go!!!

So just wondering why aren't all the GOP scum that trolls here in Iraq???? Have you all lost faith in Bushco's BS war? You aren't a bunch of LIBERAL CUT and RUN P()ssies are you? Just wondering?

It's good news that the voters in Virginia are not tolerating intolerance and racial slurs. American values are being to emerge again.

Allen is starting to hit Web on something he wrote years ago about women serving in combat.

Web is answering back, but I hope this does not damage him too much. We need him in the Senate.

I was a plebe at the Academy when Jim Webb was a First Classman - he was an outstanding Midshipmen in his class and went on to become a Gyrene as we called them - and the guys who "went Marine" were viewed as the cream of the crop. He later wrote a novel on his final year - believe it was called Sense of Honor. He knows and understands what it is really like to be under live fire - and what honor is really about in everyday life. Something that is lacking in the Bush Administration and "normal" extreme right-wing Republican politics. We need to remember Lord Burke's admonition about absolute power...

Kos has reported that Webb got $100,000 in over the transom after MTP. That is truly amazing; it came from the internet, but with no blogosphere/netroots swarm behind it. That tells me that in the space of that hour, he went from being a placeholder to a very serious candidate. Allen is finished.

Sexism is no more acceptable than racism, What stood out on Sunday was the difference between Webb's explanation of his past and Allen's.

Anonymous said...
This comment has been removed by a blog administrator.
10:00 AM