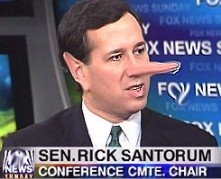 For the past five years the Busheviks have been blurring the lines between the 9/11 attacks, al Qaeda, Osama bin Laden, Saddam Hussein and Iraq. A question about 9/11 inevitably brings an answer that starts with Iraq. And vice-versa. In their quest to justify taking the nation to war, they manufactured evidence, misrepresented and cherry-picked intelligence and, by the Fall of '03, successfully convinced 69% of Americans that Saddam was responsible for the attacks which killed 3000 in NY and DC. And now they're trying to make the bait and switch act work again.

On NBC's Meet the Press Sunday, Sen. Rick Santorum, fighting for his political life down 18-points against Democratic challenger Bob Casey Jr., played the same smoke and mirrors game that his party's been doing since 9/11. During a debate between the candidiates, host Tim Russert could not ask a question about Iraq without Santorum's response being about Iran. He repeated ad nauseam what is likely the new GOP talking point designed to confuse Americans once again:

We were attacked on 9/11. We responded by going after the terrorists in Iraq and deposing Saddam, who harbored and supported them. With Saddam gone, the country is now being controlled by Iran, who's pulling all the strings. Iran is the culprit. Iran is our #1 enemy. We must stop Iran if we are to be safe here in America.

Let's get this straight just for the record: 9/11=al Qaeda=bin Laden=Saddam=Iraq=Iran. Nice, convenient little flow chart to divert attention and accountability away from their colossal blunder in Iraq, and the fact that we're there despite it having "nothing" (Bush's words) to do with 9/11. But that doesn't stop soul-less, morally-bankrupt war-mongers like Santorum from changing the story yet again. What do you expect from the 3rd highest-ranking Repug who told Russert:

-On Bush: "I think he's a terrific president."
-On the justification for war: "We did find WMD in Iraq"
-On Bush's illegal wiretappings: "What do you think stopped the British attack?"

This is the same Santorum who votes so often with Bush (approximately 98% of the time) that RNC Chair Ken Mehlman said in March that "The most important priority in 2006 is re-electing Rick Santorum." Forget the fact that Santorum is so fond of his president that he somehow manages to find himself hundreds of miles away each time Bush makes it to Pennsylvania. Forget the fact that the president himself has stated that the small, old cache of sarin and mustard gas found post-invasion were not the weapons we went to war over. Forget the fact that Democrats are not against wiretappings, just those without the law-required warrants as mandated in 1978 by the FISA Court. Forget the fact that without British and Pakastani intelligence and solid police-work to thwart the commercial jet highjacking plot, we'd likely be fishing body parts out of the Atlantic by now.

Santorum's Iran rhetoric follows the release of a House Intelligence Committee report last week which warned of the growing weapons threat from Iran and its ties to terrorists. "Intelligence community managers and analysts must provide their best analytical judgments about Iranian W.M.D. programs and not shy away from provocative conclusions or bury disagreements in consensus assessments," the report said.

Now we have Santorum, on Meet the Press, launching what he and his party hopes is the winning strategy for November: get voters' minds off of Iraq, back onto terror, and squarely onto Iran. Just like they got voters to forget that they failed to capture bin Laden, took their eyes off Afghanistan, and created a shitstorm in Iraq for no good reason. And what we'll likely be hearing until November is what Iran's influence will be like in Iraq, and how terrorists will run amok, if we pull out. Well let's remember one key thing: prior to the March 2003 invasion, there were no terrorists in Iraq, and Iran wielded no influence there. We only have the Busheviks, not Ahmadinejad, to thank for that.
Posted by The Ostroy Report at 5:44 PM

I saw the craven performance by Santorum this morning. Disgusting...if he had been on a witness stand he would have been immediately arrested for perjury!

I have absolutely no respect for Santorum, but ... I wish you would not play into the hands of the GOP by discounting the serious problem that MAY exist in Iran.

So there are the questions. Is any of this true, and if so, believe me we are in for a lot more killing before this is over. If it is not true, we need to know who is pumping us full of this stuff.

we'd likely be fishing body parts out of the Atlantic by now.

From what I've read, the plan was nowhere near operational, the plan itself relied on dubious and questionable ability to mix chemicals together on an airplane under ideal conditions without alerting flight crew or passengers. There are too many questions about this alleged plot and its efficacy to give it all this weight without those questions being answered.

Know I know why I slept in this morning.

Jim Brett- Are you a Republican mole? The Bush Administration is "pumping us full of this stuff." Iran wants to negotiate and Bush cronies are on TV talking about dropping bombs on straagetic sites in Iran. Another gets on and says we should drop the bombs although he's not sure we can hit just specific sites. One Bush henchman even said we should "nuke" them. Either you're one of them or you've fallen for the Bush administration's line of lies. Read Ostroy's article again if you really care.

I read the Haim Harrari speech. His argument is that they hate us because they have failed so miserably in their own countries. Their hatred, says he, has nothing to do with the United States or Israel which are just scapegoats. There goes Bush's reason that they're jealous of our freedom. We are not even a consideration says Harari. I'm so glad the US and Israel are innocent - well at least one man claims that to be true Wonder if his being an Israli colors his point of view?

We were attacked many times BEFORE 9/11 by Al Qaeda. Clinton did NOTHING except let Al Qaeda continue to practice on our embassies and military assets. In fact, following Al Qaeda's first attack on the World Trade Center, the Clinton administration allowed Bin Laden Construction to perform the general contracting of the WTC93 rebuilding effort.

In regards to the idiots who are questioning Iran's sponsorship of Hezbollah and hatred of Israel - get real. The planet of the apes maniac who is running Iran has repeatedly called for wiping Israel off the map.

I'd like to know what *specifically* democrats would be doing that Bush is not doing to fight the global threat from the Islamic Nazis who want to kill non-muslims?

Instead of siding with the terrorists and accussing our military of killing innocent people in cold blood without a trial (Murtha), or accussing our soldiers of terrorizing women and children in the middle of the night (Kerry), or protecting OBL from military attacks (Clinton/Berger) - I'd like to see Democrats become constructive and helpful in fighting our enemies.

There are enough real issues to attack the Bush administration on. Please stop morphing conservative statements into falsehoods and attacking the faslehoods. It lowers democratic credibility to independents.

If Democrats need something to attack Republicans on, find something that Americans will support. Not giving rights and lawyers to Al Qaeda. Not protecting the privacy of suspected terrorists calling people in America. Not suggesting to 'talk' to OBL or terrorist regimes.

There is a plan to build a 4 lane road from Mexico to Canada. There will be no customs checking until Kansas City. MEXICO will be running the customs in Kansas City, not America. Besides the obvious security problems with this proposal, it also will lower the need (and pay) for American truck drivers. Attack this! Please! This is something that I can back the left on, if they would only attack it.

It gets tiresome constantly hearing neocons blame everything on Clinton. The fact is that Bin Laden and Al Qaeda were targets of the Clinton administration and he got no cooperation from the Republican controlled Congress at the time. Also, the Clinton administration didn't crow about it in public as this bunch of clowns does, making covert ops nearly impossible.
When Bush came into power they ignored the intelligence developed by the previous administration and let a disgruntled, incompetent Louis B. Freeh make a botch of what they did do. Cheney and others keep saying, "There is a reason why we haven't been hit by terrorism since 9/11." Well there is a reason why we were hit on 9/11 too and it falls on their heads.
The planned corridor running from Mexico to Canada, another discussion of it's own, is being pushed here in Texas by Republicans, especially our two Senators.

The supposed war to find bin Laden and al Queda was, and is, in Iraq. Which, now, even Bush has said is unrelated.

The truth hurts, doesn't it?

Read the book. The 9/11 Commission Report details 4 distinct opportunities to capture/kill OBL BEFORE 9/11, but Clinton and/or Sandy Berger stopped all 4 opportunities.

Bush had 7 months, Clinton had over 7 years.

9:31PM So what if Clinton let us down because the Republicans wouldn't cooperate. What's Bush's excuse for not acting on the warning that an attack was imminent. He could have comprehended what he was told and left the ranch and saved us from 9/ll. No matter what another president might have failed to do, the "buck stops" with Bush. And, you may be so obsessed with Clinton, you haven't noticed, Bush hasn't caught him yet - dead or alive so there goes your "7 months."

anonymous 9:58,
Bush has warnings of other imminent attacks today too, but democrats are trying to make it harder for his administration to act on these warning. For example, wiretapping calls that originate in known Al Qaeda strongholds and terminate inside America. Democrats call this "spying on americans".
Just as democrats are doing today in regards to the NSA Surveillance, democrats would have strongly blocked any profiling efforts or additional security measures prior to September 11th.
We may not have caught Bin Laden yet, but have patience. It took more than 7 years to find Eric Rudolph, who was hiding in the appalachian mountains. You may remember him, he was the nut bombing American sites and killing people under Clinton's watch. Bill Clinton never found him, and Rudolph was on our own soil.

Hello.
Is this the Democratic website where anti-semitic rants about Lieberman are encouraged?

Go there, they highly encourage anti-semitic rants about Lieberman.

How can this be? Larry has been cloned into "Typical Liberal said..." and "Informative liberal said ..." Or, the two "liberals" are the same person But then all the Republicans seem like the "same person". They get their talking points in the morning and spread them like robots throughout the day on blogs, talk shows, newspapers, and radio. They are so robotish, but I guess that's better than if they thought own their on. Think how dreadful those thoughts might be.

'robotish'!?!? What kind of idiot are you? Let me guess, you're french?

How clever of you to catch the mistake and get in your little dig at the French at the same time. It is my fault of course that I scribbled "robotic" and my secretary wrote what she thought she saw. She is from another country and is the kind of idiot who has earned a scholarship at one of our best universities. (I am secretary typing this. Please forgive error.)