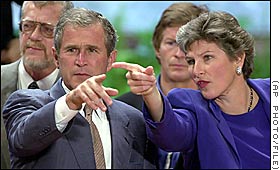 So there was Karen Hughes, top Bush advisor, on MSNBC's Hardball Monday night stating that the 57-year-old time-tested Geneva Conventions, which have been good for every U.S. president since FDR, are too "vague" for her boss. Seems the poor guy and his Attorney General Alberto Gonzales cannot distinguish between horrific torture and simple "handcuffing," and need Congress to rewrite the rules for them. The only problem is, Congress isn't buying. And many prominent Republicans--among them Sens. John Warner (VA), Lindsey Graham (SC), John McCain (AZ), and former Secretaries of State Colin Powell and George Schultz--have come out in strong opposition to Bush's proposed legislation.

The criticisms of this administration are mounting by the minute. Powell has recently said that "the world is beginning to doubt the moral basis of our fight against terrorism because of our treatment of terror suspects." Former President Jimmy Carter said the U.S.'s position on Iraq and our treatment of terror suspects has "lost the support and trust and confidence and admiration that this country's had for generations."

Asked by host Chris Matthews to comment on Carter's statement, Hughes said "I think that's unfortunate that he would say something like that because I think what's happened instead is that we had to make a series of very hard decisions faced with unprecedented threats against our country and against our freedom. In the case of Iraq, the president had to make a difficult decision that, in the light of September 11th, we could not afford the possibility that terrorists might be able to access weapons of mass destruction that we thought Saddam Hussein had. In the case of detainees, we are faced with the situation with a very serious, tough group of terrorists who are determined to kill Americans.."

The president, she said, seeks to "set out clear standards for questioning for our interrogators." Citing as an example the future capture of high-level terrorists, she said the president feels that it's very important that we be able to question that person and that the rules be clear for those who are involved in the questioning."

She then proceeded to make an absolute, utter mockery out of the Geneva Conventions, which has been the bedrock international rule of law on the treatment of prisoners of war since 1949. "The Geneva Conventions Common Article 3," she said, "which is right now very vague, it basically says you can't have 'an affront against personal dignity.' Well you know, some criminals, some terrorists, might say being handcuffed is an affront against personal dignity. Certainly being put in jail is an affront against...So what the president is trying to do is to define what that means..."

To quote one of my favorite rockers, Tommy Lee, all of this rhetoric is just sauteed in wrong sauce. Did you notice Hughes's slick morphing of Iraq and 9/11? Despite her boss saying weeks ago that the two had nothing to do with each other, he still has his spinheads hit the streets spewing the same rubbish to anyone who'll listen.

As for the Geneva Conventions, where's the confusion? World leaders for almost 60 years now have understood the Conventions just fine, and respected them without question. By redefining their meaning, by reinterpreting their Common Articles, the Busheviks proposed changes, as John McCain said, would result in the torture and abuse of American soldiers captured in future wars.

What the real issue is in this whole debate is that the Busheviks are petrified that that their treatment of terror suspects to-date constitutes war crimes; crimes they could soon be held accountable for, especially if the Democrats recapture the House and/or the Senate and obtain subpoena power and oversight. While Hughes said the president stated "we do not torture and have not tortured," they know exactly what they've done. And it is precisely these actions that could land those at the top in jail. This administration, under the vast umbrella of national security, has flagrantly and consistently violated the law, and Hughes acknowledged that those involved in questioning terror suspects could be accused of war crimes "if they did not comply with standards." Which is why she and her Rovian cohorts, on behalf of her boss, continue to muddy up the waters and create ambiguity where it heretofore did not exist. "The standards aren't clear," Hughes claimed, "so they (the interrogators) have to know the rules. They have to know what they're complying with. That's why the president went to Congress to try to clarify this."

This is Cover Your Ass 101, folks, and it likely won't work. The Geneva Conventions have held up through Korea, the Cold War, Vietnam, Bosnia and everything else in between. Only George W. Bush has had a problem with its interpretation and meaning. Only George W. Bush believes he cannot properly defend America unless he breaks the law and reshapes it to his personal liking. Call me crazy, but just when you think this guy can't possibly be any worse of a president........

On a final note, while I usually admire and respect Chris Matthews, he could've renamed his show Softball given his passive treatment of Hughes. Oddly, it was as if he felt honored to be in her presence; as if having someone that high up the Bush food chain was to be relished, and that playing hardball, his usual shtick, would've been sacriligious, or even punished somehow. He basically let her spin with relative impunity until her head almost whipped off. He contested nothing. It was embarrassing.
Posted by The Ostroy Report at 11:37 PM

Could it be that Bush and company are scared that if the Dems win control of the House (big if) there will be investigations?

Chris Matthews has been too easy on Bush and his minions for quite some time. Hard to believe he worked for Dems.

8:49 is right about Matthews. He's deceptive but his true leanings and support over the years has been with Bush and the Republicans. He also gives the Republican point of view more time when he has a panel of commentators on. I think it's his religious views that support his leanings toward Republicans because he seems to be a stanch Catholic. As for the torture quesiton, Bush and company are sadists.

What Hughes says makes it quite clear that under Bush leadership, the net effect of the 2001 terrorist assault is that we sacrifice all that made us unique among nations, all that made us a leader of nations. No more adherence to the rule of law, no more unalienable rights, just rage and lashing out in revenge, a tribal righteousness to inflict suffering on others; cruelty in the sheep's clothing of protection.... that's as in "a protection racket."

Bush didn't just totally reframe American values, he reframed Christian values; he deliberately stokes fears of another attack to keep our attention from landing on this reframing. Hughes is cut from the same cloth as Bush, and they both make me sick. They think we're stupid.

Chris Matthews should be tarred feathered and strung up on a light pole, honest to christ, along with the rest of the US Government and Corporate Newswhores. Mad as hell!

Andy - I'm sickened by what these people are doing. The past two programs on Democracy Now have featured two individuals who were whisked from their country and taken and tortured at the hands of U.S. "allies" in CIA black sites that our President wants to so desparately preserve. And he does it in the name of the Lord. Despots usually do. Stand up America. These people are war criminals. We must take our country back. I'm running for Congress down here in the "impossible" race against a 36 year Republican Incumbent. It can be done. Our Constitution is waiting for us to take back our moral ground as a nation.
Mr. President, I have one word for you. REPENT!

I agree wholehaeartedly with your piece, but one correction: FDR died before the Geneva Convention, so therefore it was "good for every US president since Truman." No biggie.

Seems the current administration has successfully managed to scare the American people in to submission. They have managed to convince so many people that their only chance of not getting killed by 'terrorists' is to accept their country turning in to a fascist state.

Don't think it's just enough to vote those people out, you need more drastic measures. Bush, Rumsfeld and Cheney needs to be punished for crimes against humanity.

Anonymous said...
This comment has been removed by a blog administrator.
9:59 AM