al-Sadr issues Wake-up Call to Bush, McCain and the GOP. So Much for the "Surge" 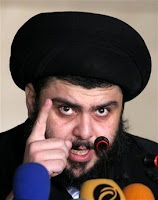 "The Iraq war is a success," they continuously boast. "The troop surge is working," they arrogantly brag. President George Bush, in denial, lying or both, regurgitates the spin often in a desperate attempt to salvage his reputation and his legacy. Sen. John McCain has made his support of the war and in particular the surge the cornerstone of his 2008 Republican presidential campaign. McCain, when discussing the U.S.'s additional troop build-up, is smug and cocky for "getting it right." But after six days of violence and bloodshed which has left 400 dead and hundreds more wounded, Shite cleric Muqtada al-Sadr, head of the Mehdi militia, has issued a very clear wake-up call to these lying, delusional war-mongers. It's become painfully obvious that it's been al-Sadr's six month truce with the U.S and the Shite-run Iraqi government of Nuri-al-Maliki, and not this bogus "surge," that's quelled the violence since September. The renewed violence among rebel militias and the government's forces since last Tuesday shows just how vulnerable the country is, with raging hatred and out-of-control violence percolating just below the surface, despite the 20,000 additional soldiers Bush dispatched last Summer. It's al-Sadr, not Bush or McCain, who holds all the cards there. He can start and stop the violence on a dime, proving once and for all that the success of the surge is pure Republican myth.

Since his militia-men took to the streets once again, an estimated 200 people have been killed and 500 wounded in Basra; over 100 killed in Baghdad; and another 100+ killed in the South. And now al-Sadr's called for another cease-fire. But the big question is, just how will McCain and the Busheviks spin this past week's carnage in the face of their surge-success rhetoric? And will the neutered mainstream media allow the lies and deceit to continue unchallenged as they have since March 2003? And what will the Democrats do to take down McCain, who's built his entire campaign on this grand illusion? It's time to expose him, Bush and this fantasy for what they are: the great big lie.
Posted by The Ostroy Report at 8:31 PM

We all know that Democrats are invested in failure. Dems are cheering for more death so they can say America lost.

wow Andy, a far cry from the love letter you wrote to McCain a few months ago! Do you like the war or not? Im confused.

why do you hate the troops?

please show me one military expert that believes it makes any sense to send or keep in troops in the middle of a civil war?

ya, we caused it, but us staying aint helping the situation.

and it appears there isnt enuf money in the world that we can bribe al sadr with to keep him from his annointed path.

but you and the rest of the wingnuts keep your heads buried deep in the sand, while our boys and girls in uniform come home in body bags or with traumatic head injuries.

btw, how old are you, and why arent you on the front line?

All the Republicans have to run on is fear and war, war, war.

If McCain wins, shame on us all.

From a once great midwest state

Democrats: You are the less educated party and you don't have the stomachs to make decisions in a dangerous world. Stand aside.

8:56 am,
You are that idiot girl from Michigan..aren't you? I know you are because you always say the same exact thing.

10:25 Before bragging again about your superior education, I would suggest a refresher course at your local junior high school.

The only proof of this need that I care to point out is the use of "exact". It is an adjective therefore you should have written "exactly the same". We all know however that "exact same" is frequently used in some circles.

thanks andy! these have been my thoughts as well. if bush plays "chicken" with al Sadr he might just get his ass kicked.

I'm not from Michigan, but I hear it's a beautiful state.

What is your point?

He sounds like an angry white man afraid of change.

and I'm from a once great midwest state too!

I'm from Michigan but I'm a woman not a girl.

10:25 may have a point == Obama said "I feel badly" on The View. Although he did graduate from Harvard. What could be the reason for his gross grammatical error?

Bush is only saying what America wants to hear. So it doesn't matter if it is true or not, otherwise he would feel somekind of pressure from the christian church to stop bending the truth.

People, wake up! It doesn't matter who is elected, the agenda is still the same. Nothing will change, just as nothing changed when the Dems won both houses.

Obama, Clinton and McCain are all members of the Council on Foreign Relations, just like Cheney, Bush Sr. and a large number of media personalities, politicians and business leaders - in other words, the American aristocracy. Anyone who expects reform or change from within the system is hopelessly naive and enslaved. Prepare for an existence outside the system and you'll be creating your own real independence.

makes no difference who takes office,the damage with the invading of Iraq is over and done with. It's going to turn out the same.Clinton says she's going to take 2 bergades a month out,till their all out within 6 to 9 months,Obama hasn't got a plan or it's somewhere between clinton's and Maccains.Mccains is 100 years long.The only thing that is certain is,Iran is the big winner in it all.Just as ollie north helped arm the Iranians after their hostage taking of our embassey there.Little George by his invading has given Iran by way of al-sadr control of Iraq,the only difference is TIME,OUR MONEY AND HOW MANY TROOP LIVES we're willing to give...........PERIOD......................

The original post here was done by someone who is seriously delusional or someone who deliberately wanted to enrage us to think that someone could be so absolutely stupid as to believe what he posted. I wonder which it is?? I have my suspicions..

Democrats are invested in failure in Iraq. Its a political fact that the Democrats will have the shit end of the stick if the Iraq mission is successful.

I did also want to enrage Democrats, but that is so easy I don't need to use the Iraq topic. I can just post pro Hillary messages followed by pro Obama messages and you libs will eat it up. I've done it before, I've told you that I'm doing it, and you still fall for it.

And we are grateful to you 9:23. Your comments, idiotic though they may be, give us a talking point to use to present our intelligent arguments and express our passionate natures, while we're waiting for another post from Ostroy. Keep up the good work.

- Hillary Rodham gets a spot on the legal staff of the House Judiciary Committee upon the recommendation of a lawyer pal of Ted Kennedy.

- The man who hires Hillary is Jerry Zeifman, a lifelong Democrat.

- The House Judiciary Committee is investigating Richard Nixon with an eye on impeachment.

- A question arises as to whether or not Nixon is legally entitled to counsel during the investigation. If so, his council would be allowed to cross examine witnesses appearing before the panel.

- The concern about having counsel for Nixon cross examine witnesses centered on E. Howard Hunt. Democrats on the committee feared that Nixon's counsel would elicit information from Hunt that would be very damaging to the Kennedys.

- Zeifman tells Hillary that Nixon is entitled to counsel. He cites documents in the committee's public file referencing the fact that Supreme Court Justice William O. Douglas had representation four years earlier while he was being investigated.

- Hillary removes the documents from the committees public file and places them under lock and key in her office where they are not available for media or public scrutiny.

- Hillary then prepares a brief for filing with a federal judge which falsely states that there is no precedent for an official being investigated by the committee to have legal representation during that investigation.

- Nixon resigns before Hillary has a chance to submit the brief in which she makes knowingly false claims.

If Hillary had actually submitted the brief, both Clintons would be disbarred today.

10:00 And you, who are making these claims, are???????? A footnote or two would be helpful when you write your dissertations.

The democrats are invested in reality. The shit end of the stick is the one that we as a nation are highly likely to get hit with thanks to the erosion of American power under the repugnantlins. Maybe with some sane, reality-based leadership we'll be able to mitigate some of the damage.

Thi news broke on TV this afternoon and has probably been stifled by now.

RUPERT MURDOCK'S DAUGHTER IS GIVING A BENEFIT BANQUET FOR BARACK OBAMA TO RAISE FUNDS FOR HIS CAMPAIGN. IT WILL COST $2500 A PLATE.

IF THIS DOESN'T PROVE TO EVERYBODY THAT THE REPUBLICANS THINK OBAMA IS THE ONE THEY CAN BEAT AND IF EVERYBODY DOESN'T THINK THAT THEY WILL PAY ANY AMOUNT TO SEE THAT HE'S THE DEMOCRATIC NOMINEE THEN MC CAIN IS OUR NEXT PRSIDENT.

And, it seems other rich Republicans are lining Obama's pockets with campaign money and there are undoubtedly many poorer Republicans contributing too. College kids don't have forty million to contribtue and there aren't that many super rich Democrats. Where, besides Murdock, is Obama's money coming from?

We got the Bush is evil part. Again.

We don't get the OBAMA for V.P. part. We thought you clearly and eloquently addressed is lack of preparedness for the office.

At least you are in quality and intelligent company with the Gore "thing:" Larry King.

We got the Bush is evil part. Again.

We don't get the OBAMA for V.P. part. We thought you clearly and eloquently addressed is lack of preparedness for the office.

At least you are in quality and intelligent company with the Gore "thing:" Larry King.