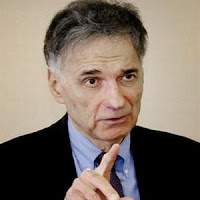 Firebrand consumer activist, progressive and political spoiler Ralph Nader recently announced that he'd be once again running for president in 2008. Nader, who siphoned away precious votes from Al Gore eight years ago, has been widely accused by many Democrats as having cost the former VP the election, and in the process giving America eight disastrous years of the Bushevik administration. But a recent Zogby poll indicates that we could be looking at 2000 all over again.

In the poll, the presumptive Republican nominee, Sen. John McCain (AZ), leads Sen. Barack Obama by 44%-39% and Sen. Hillary Clinton by 45%-39%. But what's troubling is that Nader, with eight months to go until the election, took 5% in the McCain-Obama match-up, and 6% in the McCain-Clinton contest. In both match-ups, 11% surveyed said they were either not sure of who'd they'd vote for, or, that they'd vote for someone else.

So what's the significance of all this? According to Zogby Research President John Zogby, "The messages to Democrats are clear. Number one, Nader may win enough support to get into the general election debates. Number two, what could be at risk is support among several key constituencies that the Democratic Party candidate will need to win in November, notably younger voters, independents, and progressives."

The last thing Democrats need in this already historically close, contentious race is the resurgent presence of The Spoiler.
Posted by The Ostroy Report at 8:30 AM

Chris Bowers at Open Left in his endorsement of Obama today:

"First, many people have said that there are few policy differences between Obama and Clinton, but the truth is that their telecom policies could hardly be further apart from each other. Obama proposes exactly the sort of transformative, open telecommunications policy that we need to transform the media landscape in America, while Hillary Clinton's telecom proposals are nothing more than heinous corporate welfare. Without a transformed telecommunications landscape, we are going to have an extremely difficult time building a progressive America or passing any of our other legislation.

Second, in terms of electability, in order to win the general election a candidate must first become the nominee. Simply put, I don't see many ways for Hillary Clinton to pull that off. Further, in order to win the general election, Democrats will need time to define McCain, and time to heal the party once the nomination contest is over. However, Hillary Clinton's only path to the nomination is through convention in late August, and also through a intra-partisan civil war. In other words, Clinton's path to the nomination renders her unelectable in the general. There simply won't be enough time to heal the party and define John McCain.

Third, how a candidate campaigns is a strong reflection on how that candidate governs. For example, we could tell from the 2000 election that George Bush would govern through a series of power grabs, Orwellian language, and with a total disregard for popular opinion. Barack Obama, by contrast, is campaigning through unprecedented national grassroots organizing, speeches that are becoming the stuff of legend, and the manifestation of a new political coalition that moves us away from the political alignment of 1968-2004. Too often, I have heard from the Clinton campaign and its surrogates about states and demographic groups that don't matter. Such statements are a stark reminder of a recent version of the Democratic Party that takes its base for granted, and only campaigns in a select few swing districts. We need a Democratic Party that organizes and governs based on Barack Obama and Howard Dean's campaign styles, rather than one that is based on Hillary Clinton's and Terry McAuliffe's.

Fourth, coattails and movement building matter. In both of Blue Majority's victories so far in 2008, Donna Edwards in MD-04 and Bill Foster in IL-14, the energy and activism brought to bear by Barack Obama were key. The activism in support of Barack Obama has the potential to greatly enhance the political reach of the progressive movement, and also to provide Democrats with sweeping downticket victories. I once called this progressive movement symbiosis, and I still believe it is the most promising path to a truly progressive governing majority that I have seen in my lifetime."

The more I talk to folks, the more I know that Obama will never win. We are being set up and a lot of naive folks are going to very upset. Too many white folks will not give up the power.

Very true. Too many racists are dead yet. Too bad. We are going to be stuck with McCain who is running on a continuation of the Bush agenda.

2:57 Your comment about "white folks will not GIVE UP THE POWER", implies that if Obama is elected the "black folks will HAVE THE POWER." Do you see how racist that is and do you see how frightened some non-blacks might be of "Black power" after hearing Wright?

Nadar is pathetic. He used to be such a force for good and so many, including me, admired him and was grateful. Now when I see him I think of all the wrongs we have suffered under this administration and blame him. And, he's going to do it again.

"Of course your readers are correct to point out that we are only in March and concern today about the Obama / Clinton fight will spoil November is very premature. Yes, the Clintons in 92 had to beat back Brown into June. But this misses the point.

The problem is, what happens in June? The Clintons have no intention of ever stopping until the delegates nominate them or reject them in Denver (feel free to make the case that I’m wrong about this). The proper analogy is not 92, but 80 when Teddy took his losing battle to the convention and broke the party. The Clintons are planning their floor fight and not really being very shy about it. It was as recently as this week that Hillary pointed out again that no delegate is pledged – how many times has Harold Ickes reminded us of this fact. Harold Ickes – Teddy Kennedy’s floor manager in 1980.

There is good reason to be very concerned. The biggest problem facing the Democratic party is a leadership vacuum exacerbated by the losers being the Clintons. Who is going to tell the former president come June to STFU and bow out gracefully?


DNC/RNC have exposed themselves.
'Clintons v McCain = Clintons'
Dynasties & Coronations.
Not this time -
not even as VP...