BosniaGate: Why Our Political System is Bankrupt 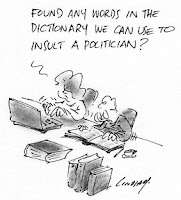 For me, it started with the crucifixion in the late 1990's of Bill Clinton by Newt Gingrich and his venomous GOP lynch mob that culminated in the former president's highly partisan impeachment. That watershed moment over some very foolish sexual indiscretions forever changed the political landscape. Since then, politics has become a literal cesspool. Quite frankly, I'm sick of it. Sick of all the ad hominem attacks; the hypocrisy; the sexual scandals; the lies; the deception; the corruption. All of it. Politics was always a dirty game, but today it reeks. And there's universal culpability, from the politicians, the media and among voters themselves. What matters most today in politics is everything that truly doesn't matter at all.

The new "scandal" to break this week involves Sen. Hillary Clinton's revisionist history over her 1996 trip to Bosnia in which she described her arrival as something akin to traveling down Vietnam's Mekong Delta at the height of that war's violence. Instead, CBS film footage of that landing indicates it was more like the Easter Parade, complete with a smiling, clearly safe, Clinton being read poetry by an 8-year-old on the tarmac. The only bullets she's dodging are the ones this week over this obvious embellishment. Watching the Tuesday morning news shows, it's clear that BosniaGate is all the media's talking about. They're feeding on it like starving leeches. It's the OJ trial all over again. But are they talking about Clinton's major policy speech yesterday on easing the mortgage crisis? Nah. Who cares about all that economic junk anyway, right? The credit crunch, the hemorrhaging stock market, record gas and oil prices, inflation, unemployment...bo-ring. What really matters to most Americans, what will really change their lives, is BosniaGate, right?

To be sure, a politician as smart, savvy and possessing a brilliant legal mind as Hillary Clinton clearly was lying about her brush with death. No doubt about it. Are we really to believe she simply mixed up her trips? Just how many times in her life/career has she had to duck to avoid sniper-fire? Seems to me that's not something you'd easily forget. But here's my question: so what? I am no more shocked over her truth-stretching as I am over Barack Obama's claim of having no idea that his 20-year pastor and spiritual advisor, Rev. Jeremiah Wright, is guilty of making incendiary anti-American, anti-Semetic speeches. The Democratic front runner from Illinois is another extremely bright, opportunistic politician with a Harvard Law degree. It's truly hard to fathom that in 20 years he had no clue whatsoever that Wright was fanning the flames of hate with his highly controversial sermons. But again I ask, so what?

When we start demanding of our politicians, and of the media, that they focus on what truly matters--policy--maybe then will the political landscape change for the better. But until voters stand up and shout "I'm mad as hell and I'm not gonna take it anymore," we're simply going to get more of the same salacious, sensationalistic crap rammed down our collective throats.
Posted by The Ostroy Report at 7:47 AM

Why is it Ostroy thta everytime one of your blogs gets heated you immediately write a new (diversionary?) column? Of course it's your blog and you can do what you want to, but it's become obvious to me that's what you do.

I want to respond to the previous blog and the query about the Black Liberation Theology. You might remove this, but all I want to do is agree with the last entry I read, that it would be nice to know exactly what that group does and believes in. What does "Liberation" mean? Liberation from what?

Andy, do you believe Hillary’s explanation for her vote for the Iraq war? 50% of the American public do not feel confident that she can be trusted to always tell the truth, and this anecdote plays into that narrative. It’s a valid issue for her, as it speaks to her electability. That’s not a big issue with Obama as a candidate, which totally doesn’t excuse his false claim that he never heard extreme comments from his Pastor. But he did follow up with a speech that attempted to explain his support for Wright in a nuanced way and use it as an occasion to address the issue of race with a frankness that is politically risky. Clinton has never done anything like that in her entire career. Say what you will, she is a very careful politician who takes care not to go out on a limb.

I think that many people were very disturbed by Wright’s comments but the polls suggest that they have come to accept that Obama or Oprah or thousands of others who listened to his sermons believed everything Wright said. As Senator McCain said, “Those are not Obama’s words.”

To continue the issue of her honesty: I don’t believe there is any possibility that Hillary Clinton thinks that Obama believes what Wright does. Never in a million years. I realize that this is just hardball politics, but McCain doesn’t parrot Fox News and she shouldn’t either. I believe that she is a brilliant woman who sincerely wants to do good things, and always has. I totally believe that her tears before New Hampshire were sincere. But she has learned tough lessons through her political life. We have the right to judge how she has responded to those challenges and judge whether her tactical decisions have crossed ethical lines. Most everybody, including myself, overlooked these things about the Clintons in the past: we focused on the positive. But this campaign has shifted that perception, and that’s why so many supporters like Bill Richardson have crossed over to Obama.

12:19 total ass kissing of obama and scrape-goating of hillary on everything that is wrong in this campain is why,you have zillets out there in the obama camp issueing death threats to farrorro and people like 12:19 refurring clinton like fox news,does he or she even have an IQ above 10.fox news has beat on the clintons for 16 years and says clinton is fox news.he or she have a good chance of being common cents shy

The above post should be removed. It is offensive.
Thank you.

only to obama fans, the truth hurts must be

12:45 pm should be removed because it's offensive, not substantively, but merely to the english language.

Here's my two cents (common or not):

I am obviously aware that the Clintons have been besieged by Fox News for years. But even Chris Wallace recently protested on air what he called the continual "Obama-bashing" on this issue. He asked his colleagues to move on.

That was days ago. Hillary is still out there pumping on this issue today. I hate to complain, but that's what's wrong with her "campain." She's stirring up divisions which only help McCain.

12:19 has, more than once, pretended to be an extremely illiterate Democrat making outrageous statments like "Obama got uppity", while, I suppose, thinking the readers are too stupid to see through his silly little game. But his ego finally forced him to reveal his, at least, minimum command of the language.

I believe the revelation of Obama's connection to a church that consistently preaches Black Liberation Theoloty is important and cannot be tossed aside. Another preacher who was on TV answered, when asked, that the Black Liberation Theology teaches what Jesus taught; and, it teaches that African Americans should owe their allegiance to Africa, their homeland and the birthplace of civilization. I do not want a President whose allegiance is to another country or continent, or church. Look what we got when we elected Bush after finding out he thought God talked directly to him and told him what to do. Look what we got when we didn't investigate Cheney's ties to Haliburton. Look what happened when we elected a president who had been taught by the Jesuits that fellatio was not real sex. I think I remember Kerry being condemned for belonging to Skull and Bones.

Hillary, Obama, their campaigns, and their most radical supporters have pushed this independent Democrat to the land of moderate Americans.

Anyone that wants to attack me for it can f*ck off. Your candidates are divisive liars and their campaigns are full of hatred hidden behind false "hope & change" rhetoric.

Since the economy is the greatest threat to us, it is obvious that we've got to elect Hillary (and BIll).We cannot survive otherwise.

I first noticed Maureen Dowed has a "woman" problem,especially strong women, when she "dissed" Howard Dean's wife during his campaign. No wife had ever stayed so distant from her husband's campagin but Dowd did a full,mean column about her.

Today, in her column she goes into Hillary's being Obama's vp or the other way around. She doesn't realize that if Obama can't win the election because of his Wright connection, he could be of no help, but only hurt, the Dem. ticket if he were the vp nominee.

It is amazing how Andy's bias is so floridly on display.

Obama's pastor becomes an issue and he doesn't have a single problem with the political storm that followed and the fact that the story went on and on and on.

Now Hillary takes a hit for something SHE said (as compared to Obama who was banged for something someone ELSE said), and all of a sudden he is upset about the politics of personal destruction.

Forget about the fact that Hillary concluded that the only way she had a chance was to drag down Obama personally - i.e., via the politics of personal destruction.

Hillary has used the politics of personal destruction during her entire political career. She's used dirty P.I.'s - one of whom is now on trial - to gather opposition research.

She conjured up the "vast right wing conspiracy" even though she knew that her husband was guilty as charged in obstruction of justice and perjury.

This is a woman is is widely known for taking her opponents to the "wood shed" - and has used that trait as one of the reasons why she should be nominated ahead of Obama.

But now you have problems with the politics of personal destruction?

Definitionally, you can't be against the politics of personal destruction and for Hillary Clinton. The two are simply mutually exclusive.

Joe Scarborough on MORNING JOE lauded HIllary for being "tough" and I say my hat's off to Joe. Her practical, dynamic intelligence, her tenacity, her willingness to fight for her cause and not back down and her deep insights,have finally been acknowledged and praised -- he did not call her masculine; he called her tough. Would have been tothe good if Obama had been tough when he heard about the anti-American, hate-whites talk from his mentor's puppit. You can carry "going along to get along" too far.

317 - the problem with "her cause" is that it's not "our cause". It's HERS and only HERS - her quest for power at any and all cost. She and her husband are creepy - don't you get that?