Another Bush Photo-op While People Are Dying 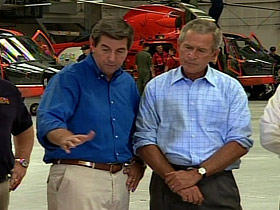 Hard to believe that while there's utter chaos, violence, death and destruction in the South, President Bush found time earlier for a 30-minute useless photo-op in a Mobile, AL hanger where Air Force One landed so he can tour the devastated areas. Flanked by Republican Governors Haley Barbour of Mississippi and Bob Riley of Alabama, as well as FEMA and Coast Guard officials, Bush spent about 25 minutes getting briefed, and then spoke for about five minutes. The briefing contained assessments and updates that he's probably received a dozen times already today. This was pure theatre, staged for the sole purpose of giving Bush and his local GOP pals an opportunity to grandstand. It was disgusting, especially under the circumstances. Rather than waste precious time with his "My Pet Goat" deer-in-the-headlights look, the president should've landed, gone straight to the mike, announced for two minutes that the U.S. Government is the greatest, most resourceful and strongest nation in the world, and that he's immediately going to the devastated locations to reassure our citizens that the federal government is here to help. And then he should've left. Period. Instead, Bush stood by and used the time for a GOP leadership commercial and mutual lovefest with Barbour and Riley. This is not what Americans needed to hear or wanted to see, and it certainly wasn't an effective use of his time given the gravity of the situation. His leadership this week has failed miserably, probably starting with his incredulous golf outing the day after Katrina struck. This president just doesn't get it. People are dying in the streets. Thousands are stranded without food and water and need rescuing. Women are getting raped. Looting and lawlessness is everywhere. Babies and children haven't eaten. Mayor Ray Nagin of New Orleans chastised state and federal authorities for "thinking small" despite the utter chaos. He wants military troops to regain control of the city and 500 buses for further evacuations. And he's extremely angry and frustrated with the lack of responsiveness: "I keep hearing that it's coming. This is coming. That is coming. My answer to that is B.S. Where is the beef?" He's asking for a moratorium on press conferences "until the resources are in this city. They're feeding the people a line of bull, and they are spinning and people are dying." It's inconceivable that America, the greatest nation in the world, after five days still cannot locate and evacuate and provide food and shelter to its hurricane-ravaged citizens. The rescue and relief effort has been mediocre at best, if not downright inadequate. Yet the spinning and the photo-ops continue. Shame on Bush. Andy
Posted by The Ostroy Report at 11:41 AM

Your believability sinks with every word and you have quite alot of them in your posts.

How long has New Orleans been built and how long have there been hurricanes? Why didn't Truman, Roosevelt, Eisenhower, JFK, Johnson, Carter, Reagan, Bush 41 or Clinton make sure the levees could withstand a hurricane?

Because it is a Bush-Bash fest, that's why.

You, kn-know, and I kn-know you kn-know 'cause I kn-know ... about NO, this might've been the perfect storm for Bush to have donned his little action hero outfit and fly around with some of the helicopter crews real up close and personal to the devastation. This might've even given him sort of an idea what it's like to be in a combat zone.

What is interesting is his lack of disregard for people who cannot provide him with some sort of press. It is a stark difference and comparison to Bill Jeff Blythe IV Clinton for whom "press" was pressing the flesh (as in shaking hands and getting close to the people, whether in the U.S. or in Engaland or wherever).

When a comparable (in effect but not in degree) flood happened in the Red River (of the North) Valley, encompassing the region stretching from Fargo to the Canadian border, Bill Jeff used his military as a backdrop but only long enough to get on a big helicopter and actually tour the area from a few hundred feet rather than a few thousand, that difference in distance once again quite telling. BJ met personally with a smaller town mayor and made the personal commitments that reassured her and the people of her city. Politics was left out of the picture.

While politics may be an overriding consideration, there are times when the subject should be more well-hidden than Hussein's weapons programmes. Facts are essential but what has to be gauged are the emotions and impressions of the people affected or sympathetic to the plight of those enduring their worst anymare. While the people can put on nice smiles and clean clothes and spend inordinate amounts of money driving or flying whatever is handy, there are many who have been left with nothing, nothing to smile about, no clothes, no cars, no way to flee their problems, from the raunch to the ranch or wherever.

This perfect storm ain't over ... not by a long shot.

You can stick your headf in the sand, be in denial, or outright lie about the facts if you like...bvut that doesn't mean the rest of us have to. A simple 5-minute Google search can bring you all the evidence you need to see exactly when the funding stopped for the levee upgrade projects. But I'm sure it's more gratifying to blame Clinton. Jeez, don't you guys ever tire of that? Your guy's been prez for 5 years, and you've run Congress for 11....and you're still blaming Clinton ands the Democrats!

My point is you guys have zero credibility when every single problem is the fault of one man. Also, you claim funding ended now that prevented the levee from withstanding above a Cat 3, why was it not complete 50 years ago?

You also can't read very well. I had Republicans in my list, not just Clinton. I was not at all taking a cheap shot at Clinton. He with the others had previous opportunity to address this. Yet only Bush has the blame for ALL. I am not saying Bush can be blamed for NONE, neither claim would leave the one claiming believable.

First I have to say that I am surprised that you don't have that spam blocker thing going on the comments section. I was hoping to see a good comment when I clicked the link, but got the autocad ad instead. But regarding this post, and your blog, OUTSTANDING! I was cashing my paycheck in a Wachovia branch today and they had Bush on a TV monitor. It was during his trip south and he kept deflecting the important issues with comments about how the pipeline was at a higher capacity than expected and that this was a good thing. So I made a comment about it and the teller looked at me like I had three heads. I guess working around all that money causes acute conservatism. LOL.

We have no troops and very few National Guardsmen available in New Orleans...why? Because they were all deployed in Iraq, where they are dying in disproportionate numbers for a variety of reasons...but that is another story...Even though we have supposedly sent 40,000, the mayor of New Orleans said that is an outright lie.
And why are we in Iraq?
Do you really think that you can lay the blame at the feet of anyone else other than G.W?
While the average Joe American citizen is being gauged daily at the pump because of said war we now have prices even further beyond our wildest imagination due to refineries being shut down......not to mention with every increase in gas prices, the Bush family a.k.a the Bush Oil Barrons grow richer...
And why are we in the predicament of no National Guard, an Illegal War, and Horrendous Gas Prices? Because GW, from the very beginning of his Presidency has chosen to either fire and/ or ignore anyone who had the balls to tell him the truth about his ill-conceived war. Anyone who chose to play anything other than the sychophant and spoke up to try and tell Bush or Rumsfeld, "No Mr. President,we can't fight this war in a matter of weeks, with a handful of troops!" was given the Texas boot right out the door. And thus here we are, our resources stretched so thin that we can not care for our own in the event of a natural disaster that was out of GW'S hands... well, well, well. I guess even the most powerful man in the world has his limits of control.
Bush didn't bank on the war lasting as long as it did and bush didn't bank on Katrina...And as a result he gambled it all on a very bad bet and he has lost big time.
Most ironic moment of the day...hearing a woman tell Bush, "We have nothing!", only to hear him respond,
"I understand."

Most people in Louisiana feel the way you do..... I am in Louisiana west of the destruction and the sad thing is I'm safe and sound and willing to volunteer yet red cross can't tell me where or how and you can't just walk up and start helping cause you have to fill out forms. I live about 200 miles away and our very, very small town has about 350 victims at least and red cross said, "sorry can't help" so our little town it doing it's best to keep every body with what they need. If you wanna donate to victims that red cross isn't helping and the gov. isn't fast enough to help....go to www.mbdr.org it's the little place that all the different religious leaders of our town put together to help these people who are living in tents during 115 degree heat (with the heat index). Louisiana's small towns need help to help the victims that overflowed to our towns. Thanks so much for your concerns sometimes that's all these people get.