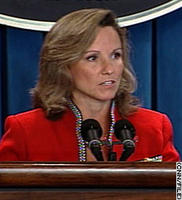 Following the government's woefully inadequate preparation for Hurricane Katrina and the response to its catastrophic aftermath, President Bush promised the nation a full investigation of the failures to "determine what went wrong and what went right." To that end, he's tapped homeland security adviser Frances Fragos Townsend to lead the White House inquiry into the administration's abysmal handling of the rescue and relief effort. The major problem with this is that the proverbial fox will be overseeing the chicken coop. Townsend is a party loyalist. A faithful Republican servant of both the GOP and Bush. And now she'll be reporting to Bush's uber-operative, Karl Rove. As Sen. Dick Durbin (D-IL) put it, Townsend "may be a very competent individual. But how in the world can we get to the truth of the question as to what went wrong with Hurricane Katrina -- how can we really hope to discover the incompetence that led to all this human suffering and devastation -- if the administration is going to investigate itself?" And as for Rove, Durbin added: "Putting Karl Rove in charge makes no sense whatsoever. He has no resume and no skills other than running political campaigns -- and if he is being put in place to protect the president politically, that decision does not serve the best interests of the American people, nor of the victims of Hurricane Katrina."

So now we're being asked to put our collective faith in the team of Bush, Rove and Townsend to not only demand accountability for the Katrina fiasco, but to also reassure us that the government--the same government that doesn't seem to give a rat's tuchus about the poor and middle classes, or about shoring up America's infrastructure--will be prepared to handle the next natural disaster or significant terrorist attack. Let's be sure about something. This is an administration that only cares about one thing: protecting and preserving its unprecedented power. It's all about the power, folks. Power over the electorate, over the media, over our allies. Power over the House, Senate and the courts. Power which is highly concentrated in the hands of the Bushies, and power which benefits the wealthy and corporate America.

To be sure, Townsend will be nothing more that a cog in an extremely partisan wheel. Is there anybody out there who honestly believes she will ultimately return a guilty verdict on the Bushies? That her "investigation" will conclude that Bush himself was slow to respond; that the administration embarrassed America through its utterly lame handling of Katrina? Or that she will recommend that certain key administration heads should roll? Take a good look at former FEMA head Michael "Brownie" Brown, because he's going to be the only head to roll in this inept administration.

As expected, Democrats anticipate a whitewash of the administration's failures in the Gulf crisis. Former presidential candidate and Massachusetts Senator John Kerry said the Hurricane "stripped away any image of competence and exposed to all the true heart and nature of this administration. The truth is that for four and a half years, real life choices have been replaced by ideological agenda, substance replaced by spin, governance second place always to politics." That we should expect an open, honest and meaningful investigation from the most dishonest administration in history is an insult to our collective intelligence.

In launching Bush's White House inquiry, chief of staff Andrew Card wants one senior official from each cabinet to work with Townsend. They've been directed to give this effort "their full attention and highest priority." Don't hold your breath. Andy
Posted by The Ostroy Report at 12:07 AM

Hey do you guys have your blog posts and talking memos of how bad FEMA "did" in the Rita aftermath? Make sure they are done BEFORE Rita hits land instead of 5 minutes afterward like Katrina!

Great blog, keep it up!

let's just hope bush spread some of that compassionate conservatism over to Houston.

DHS oversees FEMA now, DHS says they are responsible for disaster relief in the event of a national catastrophe, it's on their website.

Oh, now I see, so DHS is investigating DHS, no wonder Ridge left.

ALL I CAN STAND WRITES..."Hey do you guys have your blog posts and talking memos of how bad FEMA "did" in the Rita aftermath? Make sure they are done BEFORE Rita hits land instead of 5 minutes afterward like Katrina!"

No, we don't. But it seems Bush doesn't have his head up his ass like he did with KLatrina either.

I think the GOP already has their "Bush is doing the best job of any President ever" talking points out to Fox News, Washington Times, National Review, and the right-wingnut blogs, so at least they are covered.