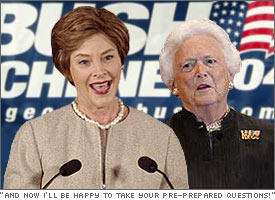 It's been an unusually vocal week for the Bush women. First, it was Barbara Bush, the president's mother, who made the most asinine comments on Monday while touring the Houston Astrodome, new home to some 25,000 Hurricane Katrina evacuees. And, "disgusting" is how First Lady Laura Bush today referred to accusations that racism played a part in her husband's dreadful rescue and relief effort in the Gulf.

It's time Bush stops suckling at the bosom of his mommy and hiding under his wife's skirt. But he has little choice. He's not only inept at running the country, he's the most inarticulate, stammering president in modern history, incapable of conveying a logical, coherent explanation and/or defense of his policies and actions. So, time to wheel out Barb and Laura. To put a nice gloss on the evacuees' saga in Texas, his mom said: "What I'm hearing, which is sort of scary, is they all want to stay in Texas. Everyone is so overwhelmed by the hospitality. And so many of the people in the arena here, you know, were underprivileged anyway, so this is working very well for them." These statements are so out of touch with reality one can almost imagine her next comment being "I like cheese" (picture Jerry Lewis's face as he yells..."Lady!" ). How come every time I see the Astrodome evacuees being interviewed on TV they all say they can't wait to get out to go back to New Orleans? Sure does sound like they love their plush new surroundings.

And Laura went on the warpath today, staunchly defending Dubya from the racism claims made by rapper Kanye West and DNC Chairman and Liberal firebrand Howard Dean: "I think all of those remarks are disgusting, to be perfectly frank, because of course President Bush cares about everyone in our country. And I know that. I mean, I'm the person who lives with him. I know what he's like and I know what he thinks and I know how he cares about people." Well, judging from his actions the day after Katrina struck, what we do know is that he cares an awful lot about his 9-iron.

The main point concerning the race issue is not whether Bush intentionally withheld critical rescue and relief resources because of the victims' skin color. That is a ludicrous supposition. However, I do believe the tepid, anemic initial government response was rooted more in the subconscious. To illustrate the point, had the National Weather Service forecast a tsunami to hit Malibu, CA, I suspect both California and the federal government would've called out the cavalry to perform a sweeping evacuation prior to the waves hitting shore, and would've subsequently been Johnny-on-the-spot with rescue and relief assets aplenty. Anyone who thinks otherwise is in denial of the realities of what former Sen. John Edwards calls "the two Americas."

One thing's for certain, whenever Dubya rolls out the Bush women, it's a sure sign that he's running scared. Andy
Posted by The Ostroy Report at 8:15 PM