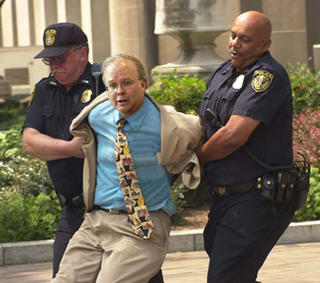 House Majority Leader Tom Delay (TX) has been indicted on conspiracy charges. Senate Majority Leader Bill Frist (TN) is under SEC investigation for insider trading. Can Bush's chief advisor Karl Rove be next? Might this photo be a reality sometime soon? Rove, the scandal-ridden Republican operative, is a key figure in the Fed's grand jury investigation of the identity leak of former CIA agent Valerie Plame. The probe, led by special prosecutor Pat Fitzgerald, is scheduled to wrap up in a matter of weeks. With the heat on Bush over Iraq, Katrina and the economy, and with the Delay and Frist bombshells the talk of Washington, the GOP is finding itself increasingly on the political hotseat these days. There's a mounting chorus of disapproval of our leadership among Americans, and this is spilling over to Republicans as well. With its eye trained on next year's mid-term elections, the GOP is trying to take the high road in order to survive and maintain power. The climate in Washington lately seems to be gearing more towards investigation, prosecution and punishment. Polls are plummeting, and heads are starting to roll in ways unimaginable a year ago. The Bushies' unprecedented stronghold on power is crumbling as we speak. All of this does not bode very well for Rove. Just a few short months ago a perjury indictment, or worse, a criminal charge related to his treasonous leak, might have caused quite a stir and stood out like a sore thumb. But in view of the Delay and Frist scandals, along with Bush's pathetic approval ratings, it just very well may be viewed as another case of Washington cleansing itself of another piece of trash. Momentum is certainly not on Rove's side. Andy
Posted by The Ostroy Report at 7:35 AM

The real question is if Rove is indicted will Bush throw him under the Bus?? Bush originally promised to CAN anyone in his admin. If they were found to have had any involvement in the PlameGate affair and then reneged on his pledge when it was found that his Political Svengali was involved. Remember, if there is no Rove there is no Bush. Truly, Ole Turd Blossom is Machiavelli’s the Prince incarnate. Don’t count this Political agent of the ANTI CHRIST out to soon.

Ok, now for a brief break from partisanship. If indictment is now the standard for relief from office, I am interested in what checks and balances can be put in place to prevent hacks from the left or right from simply indicting to get out of the way.

Whether or not the Delay indictment was politically motivated, since it was a printed strategy to get rid of him by indictment, and just 2 weeks ago Earle stated Delay was not a target of the investigation, and then there was an outcry from national democrats and then Delay was indicted: many will see this as being partisan. (Grammar checkers, I know that was a run on sentence) Maybe down the road some GOP member might consider retaliating in kind to what he perceives was the case. What checks can be put in place to prevent this partisanship?

I realize at the moment you don't have any such desire to keep this in check, so I don't expect ideas to pour out. Who knows, maybe one of you is objective.

Sorry Buddy no objectivity or quarter given here.

The GOP has spent the last four and a half years lieing, destroying peoples reputations..etc to get their way and jam their agenda down the throats of America. Bush and the GOP set the tone of this Partisan Blood sport long ago and now those of us on the other side of the aisle are more than willing to play the game. There is no way in hell that we that seek the total Political downfall of Bush and his cronies are gonna sit back be objective and "play Nice" now that we smell blood. The only sad part is that when all the truth comes out about how badly the country has been screwed long term by Bush and the GOP’s greed driven policies there will still be people like you that will support these evil blood suckers.

You want the GOP brand of objectivity watch the FOX NEWS CHANNEL or check out the latest party line at REDSTATE.ORG.

Judith Miller from the New York Times has agreed to testify. She has acknowledged that her source was Scooter Libby,Cheney's Chief of Staff. This is getting good!

Therefore, the Republicans follow the Nixonian tactic of blaming the media and the courts.

This may work, in the sense of "no controlling legal authority", but it fails in the court of public opinion.