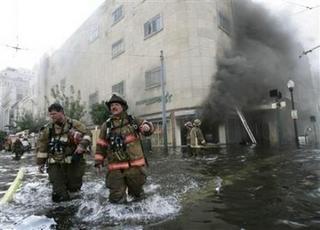 Al Naomi's been very busy this week. He's the Army Corps of Engineers' regional manager who was overseeing the Southeast Louisiana Urban Flood Control Project (SELA) repair and upgrade assignment on New Orleans' hurricane protection levees, three of which were breached this week the day after Hurricane Katrina hit shore. It was these breaks in the levees that caused most of the death and destruction in the city. Naomi's angry. He frustrated. And he's been talking with reporters at great length about what he feels was an avoidable catastrophe. He's very critical of the Bush administration, which cut funding for the upgrade project and subsequent research studies in order to pay for the Iraq war and the tax cuts for the wealthy. Naomi cites years of budget debates between the administration and the Louisiana Congressional delegation over appropriations which, in retrospect, seem tragically short-sighted. As quoted in the NY Times today, Naomi said "It would take $2.5 billion to build a Category 5 protection system, and we're talking about tens of billions in losses, all that lost productivity, and so many lost lives and injuries and personal trauma you'll never get over. People will be scarred for life by this event." Let's be clear on this. We're talking $2.5 billion that would have fully protected a city that most experts have predicted for decades would eventually fall victim to such a powerful and deadly storm. Now for some gut-wrenching perspective: $2.5 billion is about two weeks worth of Iraqi war funding. Let me repeat that. For what we're spending in just two weeks to fight this unjust, 100% elective war, the U.S. government could have provided New Orleans with the much-needed precautionary measures that experts say would've avoided much of the nightmare that's unfolding. Now think in annual terms. The Bush administration is burning through about $100 billion per year on the war. Further, the Bush tax cuts for the top 1% income-earners amount to about $37 billion per year. That's a lot of levee upgrades. Seeing the death, destruction, lawlessness and despair taking place in the South, it's now inconceivable that we're squandering so much capital in Iraq, with no end to the hemorrhaging in site, and an almost assured Vietnam-like finish where ultimately nothing will be accomplished except the creation of a new headquarters for terrorists within a new radical Islamic state. Just think about the $200+ billion we've spent since the war began, and how far that money, and the hundreds of billions in future cost, would go towards making America safer, more secure and protected from terrorism and natural disasters. And, it's unfathomable how utterly irresponsible and fiscally insane it is of Bush to lavish such huge tax breaks on the rich when we clearly need the revenue to fund this quagmire and protect our homeland at the same time. Given the hell on earth that's been witnessed this week in Louisiana, Mississippi and Alabama, it's frightening to think what would happen if one of our major cities were once again the victim of a devastating terror attack. It's abundantly clear from the thousands still stranded and dying in Louisiana that we are not prepared to quickly and successfully deal with catastrophe in this nation. The Dept. of Homeland Security is underfunded, our National Guard and active troops are depleted, and much of our financial and military resources are being wasted in Iraq. Perhaps now it's easy to understand why so many Americans have been passionately against this war from the start. And it's also why many Americans--including Al Naomi, who begged for more money to shore up New Orleans' hurricane protection systems--are sitting back now, shaking their heads in profound sadness and disbelief, and asking why? Andy 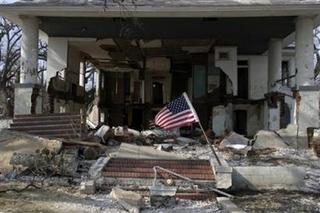 It has worked for every supply sider: JFK, Reagan and now Bush.

Look at the 2001 revenues before the tax cut and now after the tax cut. Way up and rising. Add to that a low 4.9 unemployment rate and you've got an economic winner.

When you call using a tried and true revenue booster irresponsible you look like a fool.