Delay vs. Lampson: The Hammer Can Be Defeated in '06 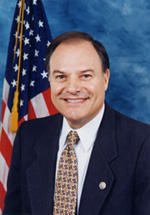 Take a good look at Nicholas V. Lampson. You're going to see and hear a lot more of him over the next 13 months. And why is he smiling? Because this is his week. The indictment of House Leader Tom Delay (TX) has created a monumental opportunity for Lampson, the Texas Democrat who's challenging Delay for the 22nd District seat in next year's midterm election. Lampson is no political novice. He has eight years of Congressional experience having served the 9th District, but lost his '04 re-election bid to Republican Ted Poe under Delay's redistricting scam. He'd like nothing more than to get payback, and we'd love to see him do it. And we'll do all we can to help.

Granted, at this stage, Lampson's got an uphill climb, but 13 months is an eternity in politics. Just ask former Speaker Newt Gingrich (R-GA) or former Illinois Rep. Dan Rostenkowski. Both were Congressional high flyers who ran aground and crashed hard. Gingrich was accused of unethical behavior over misuse of tax-exempt foundations for political purposes. Rostenkowski was hit with corruption and mail-fraud charges, was indicted, and served a 17-month sentence. With Tom Delay starting to face a similar fate, the door is wide open for Lampson.

The Republicans have held the controls now for over a decade, and that's a little too long. This grip on power is starting to unravel. Delay is damaged goods regardless of which way the case goes. Senate Majority Leader Bill Frist (TN) is on the SEC and Justice Department hotseat over questionable stock trades in family owned HCA Corp. GOP lobbyist, loyalist and fundraiser Jack Abramoff's been indicted on wire fraud and conspiracy charges. White House aide David H. Safavian, was charged with obstruction last week. Ohio Gov. Bob Taft (R) was indicted last month on criminal corruption charges. And President Bush's poll numbers, as well as Congress's approval ratings, have been receding faster than Karl Rove's hairline. It doesn't take a political genius to realize that the Democrats have a terrific opportunity to repeat what the GOP did in 1994 and kick an unpopular party out of power.

I wrote earlier this week about the race in PA between Sen. Rick Santorum and challenger Bob Casey Jr., who's held onto a commanding 15-point lead over the incumbent. With Lampson, the fight will be harder, but we're sure Tom Delay and his political chicanery will help propel the Democrat. But that's not enough. Lampson needs our support. He needs our time and our money. If we are to truly defeat these rabid ideologues we must together wage a state-by-state battle. Volunteer. Get involved in these critical campaigns. Go to Casey's and Lampson's websites and donate what you can. Let's strike while the proverbial iron is on fire. Andy
Posted by The Ostroy Report at 7:08 PM

After visiting Mr. Lampson's website, I must say I am underwhelmed. "Bold" he ain't.

It seems to me the only thing he's got going for him is that he's 'NOT Tom DeLay'. If I lived in his district, I'd be seeking out a Green Party alternative.

Well, I haven't looked at his web site, but I heard him speak tonight here in Portland Or where a fundraiser was held for him. He spoke with passion and intensity. Unless he has some serious skeletons hidden, he should beat Delay easily.