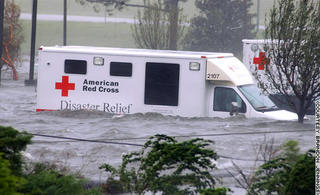 We came across this heartfelt and extremely moving email from a friend
who received it from a family friend. It's about their son Josh, a
reporter living in Biloxi, Miss, a Columbia graduate who was formerly
in the Peace Corps in West Africa. There are thousands of personal
accounts such as this that have chronicled the chaos and devastation,
sorrow and despair, and the living hell around them. It's important
to hear their stories and admire their courage, determination and will
to survive. Our thoughts and prayers and messages of hope go out to all
of them, and to everyone in the horrifically affected regions:

Family, friends, neighbors, (We have put together a list only of the
people who have called to inquire about Josh).

We spoke with Joshua last night and we have thrice been on the phone with
the Knight-Rider Corporation in Washington, the company that owns the
Sun Herald in Biloxi, Josh's paper.

First, re, Joshua. He's okay, exhausted, hungry, discomfited, but okay.
The first floor of his two-story apartment building was ruined by the
storm surge, some five feet of water, but the building is structurally
sound, and the residents of the second floor, including Joshua, have
returned. For the first time last night he slept there; a fellow reporter
joined him. The have been working round the clock on two hours sleep,
and you can hear the deprivation in their voices.

The Situation At The Paper: half the staff, some fifteen reporters and
an equal number of editors and staff people, have lost their homes. The
newspaper building is a kind of shelter in and of itself: Knight Rider,
using a military model of organization, has established a kind of rear
area command post and supply depot in Georgia, and from there they are
ferrying in by convoy food and water to the people at the paper. Other
KR reporters have been sent in on a rotating basis. The company puts
them in RV's and heavy-duty SUV's, loads the vehicles with supplies and
dispatches the reporter. Most of these vehicles are being left behind
for the newspaper staff. Driving is difficult; debris is everywhere and
it is impossible to go a quarter mile without getting a flat or finding
a road that is simply impassable. KR is offering the staff low interest
loans, emergency cash, help with FEMA reimbursement. Am employee assistance counselor has been sent to the paper as well. Knight Rider is also in the process of establishing a fund to help the paper's staff; they promise to match dollar for dollar up to half a million (we guess this will go much higher). As soon as we have details of the fund we will pass them on.

The Situation in General. It's bad, Josh said. The TV images you are
seeing do not begin to show the level of devastation. There are bands
of wasteland in Biloxi, swaths of ground where nothing exists -- nothing...
The scene is war-like, he said, in its devastation. He walked into a house
in Pass Christian, a community Southeast of Biloxi and found a mother with
a dead two-year-old wrapped in a sheet lying on a couch. Rot and physical
corruption are beginning already; if you have lived or worked in the
tropics you know it does not take long. The stench, he says, is overpowering, and everyone is very afraid of disease. With no running water or electricity, they have immediate sewage problems as well. I'll spare you his personal details; in general human effluent is compounding the problem.

The Salvation Army ran out of food two days ago. There has been no sign
of the Red Cross. Army troops occasionally pass through the area, headed
to who knows where to do who knows what. People are begging for water and food and clothing and help. And they are very, very, angry at the complete lack of response from the government, the outrageous indifference inherentin the government statements, most of all the complete lack of preparedness for a storm everyone knew was coming. This anger, of course, gives way to depression when they calm down and look around and see, to paraphrase Gertrude Stein, that there is no there, there.

He begged us not to try to get to him. If effect, he said, they have
no choice but to wait for the government relief columns to arrive. We
think his anger, rage really, is being compounded by what he sees every
day as he makes his way up and down what is left of the coast to gather
reports. His appeal was NOT personal -- if he survived two years in the
pesthole of West Africa, he can handle this. Rather he was reflecting what
he has been covering -- utter destruction, a shell-shocked population, a
modern American community without shelter or food or water...yet, a
government that clearly is failing its citizens, a sense of dislocation and
loss so powerful, most people can not express it.

To the journalists reading this note, I will say this: this is one gutsy
little newspaper. E&P filed this

When this is over, and God knows when that will be, we -- former reporters
and editors and journalism professors -- should do something to recognize
their spirit and grit. Yes, sure, it's a great story, the story of their
lives, but the staffers are also victims (half, half of them have lost
everything.) They go to work everyday because they know that "information"
is a kind of tonic to people in distress. They go to work because they are reporters, because it's their job.

We are proud of Joshua; he stayed through the storm and hit the streets
before the winds had died down. He works, sleeps, works. He said he was
grateful to have a job, a task, a mission, in the middle of all this.
Most folks, he said, sit around on piles of rubble, wide-eyed, reeling.

Finally, he asked us to thank all of you. We told him of your calls,
dozens and dozens of them, of your best wishes, your offers of support.
He said to say this: he is doing his job, he is being a reporter. Those
of you who have spent a lifetime in the business will understand what
that means.

Michael and Beth and Ben
Posted by The Ostroy Report at 11:15 PM

Now you've got me thinking. I really enjoy this blog, I'll definitely pop around more often, keep it up!

I'm glad I came to your site. You really know how to write a post. What do you think of this site on Life Insurance Quote?

Blogging Offers More Than Face Value
Features Editor September 02, 2005 As a girl, writing in my diary was a private, personal matter.
Hey, you have a great blog here! I'm definitely going to bookmark you!

Come and check it out if you get time :-)

It is really too bad that the mayor missed an opportunity to bus out thousands of people on buses readily available. See my blog or this post from another blog to see this horrific missed opportunity: http://junkyardblog.net/archives/week_2005_08_28.html#004749

The liberal bubble that claims lack of funding by Bush Administration has now burst. Read the following article that shows how fortification of the levee for hurricanes began in 1965! It was never finished for lack of funding ALL THAT TIME! Your pathetic Bush bash is now officially over.