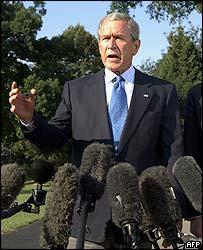 George W. Bush, the biggest buck-passer in U.S. presidential history, has announced that he's going to lead an investigation into the government's failure in the rescue and relief effort in Hurricane Katrina's devastating and deadly aftermath. "What I intend to do is lead a--to lead an investigation to find out what went right and what went wrong," Bush said yesterday (yawn). This is the same president who earlier in the week, under Karl Rove and Dan Bartlett's damage-control plan, has been attempting to spin the blame towards New Orleans Mayor Roy Nagin and Louisiana Gov. Kathleen Babineaux Blanco, both Democrats. This is the same president who's bestowed nothing but praise on officials such as FEMA head Michael D. Brown and Homeland Security Director Michael Chertoff who, according to most sane observers, demonstrated gross negligence and ineptitude during the initial, most critical moments of the catastrophe. This is the same president who's doggedly enlisted his own public praise, and that of the administration's, from partisan cronies such as Mississippi Gov. Haley Barbour, Secretary of State Condi Rice, Education Secretary Margaret Spellings, Joint Chiefs Chairman Richard Meyers, Defense Secretary Donald Rumsfeld and countless others. This is the same president whose been regurgitating "progress" talking points, just as he's relentlessly been doing on the Iraq war front. And in a last-minute coup de grace,, he's dispatching that other bastion of compassionate conservativism, VP Dick Cheney, down to the region to take charge, "cut through the bureaucracy," and be the administration's formal face of the recovery effort. Is Cheney truly the best we've got for this colossal mission? No, but he's the president's guy, and that's all that ever seems to matter in this administration.

If it's anything like the 9-11 investigation, Bush's "analysis" of the events before, during and after the storm hit and the now-infamous levees broke, will be nothing but smoke and mirrors; mere lip-service designed to distract and deflect accountability away from the Bushies. Aren't we still waiting for the 9-11 heads to roll? Given the resounding chorus of praise from the Bush camp and the prez himself, should we expect anything different this time around? Can a president who is himself infallible, and is fiercely loyal to his team, be an objective critic regarding the government's response? Can we trust him to do the job and do it right? If history is any indicator, the answer is no way.

It is going to be extremely difficult to move off of the public stance he's already taken on the performance of administration officials. Brown was told by Bush last Thursday at a nationally televised photo op in Mobile, Ala..."Brownie, you're doing a heck of a job." We've now learned that Brown waited five hours until after the storm hit to ask Chertoff for 1,000 Homeland Security employees to be dispatched to the region, giving them 48 hours to arrive, and requesting that they "convey a positive image" about the government's response for victims. Brown also admitted late last week to CNN's Paula Zahn and ABC's Ted Koppel that he was unaware until late Thursday that 20,000 evacuees were trapped in the New Orleans Convention Center, and living under profoundly inhumane, horrific conditions. Still, he received Bush's high praise.

Chertoff, who under Bush had FEMA folded into DHS, was embarrassingly ineffectual as well. As Newt Gingrich said,"As a test of the homeland security system, this was a failure." Still, he received Bush's high praise.

Further, Gen. Myers said about the initial military response: "Not only was there no delay, I think we anticipated, in most cases--not in all cases but in most cases--the support that was required." Oh really? I guess that's why five and six days after the storm New Orleans was under complete siege from marauding bands of violent thugs who were looting, carjacking, raping and beating defenseless victims, and firing at rescue choppers and Army Corps workers. Still, he received Bush's high praise.

Regarding Bush's investigation plans, White House Press Secretary Scott McClellan stated: "We're going to have a thorough analysis of the response efforts," yet offered nothing in the way of specifics, timetable and ultimate accountability, and implied that the investigation would not start for quite some time. Don't hold your breath.

Why bother investigating? The Bushies have already made it clear where the blame lies, and more importantly, where it does not. This administration has never erred...and with the all-important mid-term elections coming in the blink of an eye next year, I doubt they're going to start now. The relentless spinning will continue, and so will the deception and the lies. That's what the Bushies do best. As Bush's mother Barbara incredulously said yesterday about the fate of the thousands of Hurricane victims now stranded in Houston: "What I'm hearing, which is sort of scary, is they all want to stay in Texas. Everyone is so overwhelmed by the hospitality. And so many of the people in the arena here, you know, were underpriveledged anyway so this is working very well for them." Can you believe this??!! I guess the out-of-touch-with-reality apple doesn't fall far from the tree. You want to talk "scary?" What's scary is that her son is president. That's what keeps me up at night. Andy
Posted by The Ostroy Report at 12:29 PM