Roberts: The Wolf in Sheep's Clothing 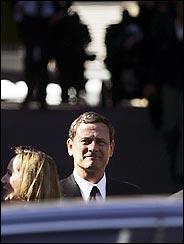 The Senate curtain on the John G. Roberts Jr. show officially opened yesterday with a Tony Award-worthy script. President Bush's nominee to the Supreme Court--originally the replacement for the retiring Sandra Day O'Connor and re-nominated as Chief Justice after the death Sept. 3rd of William H. Rehnquist--delivered his lines to the Judiciary Committee in a manner that would make any great stage actor proud. Despite the fact that the White House has yet to release documents which Democrats
have requested pertaining to Roberts' years as young lawyer in the Bush 41 administration--papers that might shed some further insight into Roberts' positions on several controversial issues--it was a day of superficial cordiality and, unfortunately, benign resignation. Roberts' confirmation is all but assured, which reduces these hearings to nothing more than a sad formality. Democrats, in the minority, lack the votes to block the appointment, and have opted not to filibuster, instead targeting the next Bush nominee, the O'Connor replacement, for the main event.

Give Bush credit. On paper, Roberts appears to be the perfect choice for a
president with an aggressive conservative agenda. He's a young, handsome, charismatic guy who just also happens to be a brilliant lawyer and, most
important, level-headed and even-tempered. The latter of which is not often
found among Bush officials. But make no mistake about it: Roberts is a
wolf in sheep's clothing. From documents made public, and from snippets
of interviews over the years, Roberts' has taken a radical conservative stand
on key issues such as abortion, civil rights, voting rights, school prayer,
church and state, big business, employee rights, school integration/busing
and the environment. According to Sen. Patrick Leahy (D-VT), co-chair of the committee leading the hearings, Roberts' views were "among the most
radical being offered by a cadre intent on reversing decades of policies on
civil rights, voting rights, women's rights, privacy and access to justice." The chorus of opposition includes Sen. Ted Kennedy (D-MA), who said the Roberts documents "show he was on or beyond the outer fringe of that extreme group eager to take our law and society back in time on a wide range of issues of individual rights and liberties, and on broad issues of government responsiveness to public needs."

At the hearing yesterday, Democrats did their level best to grill the nominee. Sen Richard J. Durbin (IL) drove home the main point: "The basic question is this: Will you restrict the personal freedoms we enjoy as Americans or will you expand them?" Additionally, New York Sen. Charles E. Schumer voiced what is one of the biggest concerns: "We have seen maybe 10 percent of you, just the visible tip of the iceberg. And we all know that it is the ice beneath the surface that can sink the ship." And California's Sen. Diane Feinstein reiterated to Roberts what she had recently told him privately, that she cannot vote for someone intent on overturning Roe v. Wade. "I remember what it was like when abortion was illegal in America," she said, recalling horror stories about "back alley" abortions and suicide.


Roberts opening remarks were an attempt to quell these and other concerns: "I will be open to the considered views of my colleagues on the bench...and I will decide every case based on the record, according to the rule of law, without fear or favor, to the best of my ability. And it's my job to call balls and strikes, and not to pitch or bat." Just what we expected him to say. However the wolf, when confirmed, will unfortunately have about 35+ years to howl. Andy
Posted by The Ostroy Report at 7:27 AM

Andy: Your quote 'Sen Richard J. Durbin (IL) drove home the main point: "The basic question is this: Will you restrict the personal freedoms we enjoy as Americans or will you expand them?' troubles me. A supreme court justice's job is not to expand freedom, but to interpret the constitution.

Speaking of wolves, you liberals would howl if conservative judges began "legislating law" from the bench that was against your agenda. The hypocrisy is amazing that judicial legislation is fine if they call it the way I like it, but wrong if they call it how I don't like it.