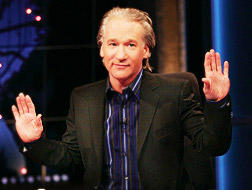 The always irreverent political satirist Bill Maher was especially biting during his HBO show "Real Time" Friday night, calling for a "California-style recall" of President Bush, "complete with Gary Coleman, porno stars and action film heroes." Aided by legendary comedian-turned-political-humorist George Carlin and Atlanta Journal-Constitution editorial page editor Cynthia Tucker, Maher spent much of his program going for Bush's jugular on everything from the government's embarrassingly inept rescue and relief effort in the post-Hurricane Gulf, to the quagmire in Iraq. Holding up the Right was conservative journalist and entrepreneur James K. Glassman, who did his best to defend Bush, the administration and the government's response in the critical initial hours and days after the storm struck. While most of America feels ashamed of how we left our citizens for days to die in the flooded streets, on rooftops, in attics and in wheelchairs under horrifically inhumane conditions at the Convention Center and Superdome, Glassman does not. Ya gotta give these guys credit. They really do stay on message.

But the real fun came during the show's closing minutes, following the "New Rules" segment. Maher turned it into a hilarious Message to the President bit. Even though Bush believes there's still much to do, like "eliminating the sales tax on yachts," or "giving embryos the right to vote," Maher suggested the president pack it in and head back to Crawford, especially since there's nothing left to spend and no more wars to fight because the Fed's depleted both financially and militarily from record deficits and Iraq. Maher said quitting comes naturally to Bush, who typically gets bored with one job and moves on to the next, and cited the oil company and the Texas Rangers baseball team as examples. He suggested the president "find another fantasy job...like Cowboy or spaceman."

He then went 'nucular' on Bush for being a dreadful president: "Mr. President, you govern like Billy Joel drives!...On your watch, we've lost almost all of our allies, the surplus, four airliners, two trade centers, a piece of the Pentagon, and, the city of New Orleans!" He continued amid huge howls from the heavily left wing audience: "I'm not saying you don't love this country. I'm just wondering how much worse in can be if you were on the other side. And yes, God does speak to you, and what he's saying is...take a hint!"

Oh, if only Dubya would take his advice...
Andy
Posted by The Ostroy Report at 9:51 PM