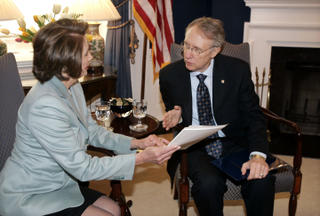 Bravo to the Democrats. They've bailed on the new Republican-controlled House-Senate Committee that'll be investigating the colossal failures of the pre/post Hurricane Katrina rescue and relief effort. Expecting massive partisan stonewalling and whitewashing to protect President Bush, House Minority Leader Nancy Pelosi (CA) and Senate Minority Leader Harry Reid (NV) are instead seeking a 9-11 type independent inquiry. The new Committee, formed by Senate Majority leader Bill Frist (TN) and House Speaker J. Dennis Hastert (IL), gives Republicans control over the process in terms of setting rules and selecting witnesses. Pelosi and Reid said Democrats were not consulted on the Committee's formation, and doubt that the Bush White House will ultimately be held accountable for its role in the failure in the Gulf.

From Pelosi: "Despite all the talk of bipartisanship, they have just on their own, unilaterally, put forth a proposal that will result in a whitewash of what is going on here....If we are ever going to truly protect the American people, now it is clear to me that we must have an outside independent commission, as we finally arrived at on 9/11."

Under the Committee's current structure, Reid said Senate Democrats would not participate, adding that "the only way to ensure that all levels of our government are held accountable to the people is to take this process out of the hands of politicians with a vested interest in the outcome."

So you think this has influenced Frist and Hastert? Fat chance. "It looks like the Democrats want to play partisan political games at an important time," said Hastert spokesman Ron Bonjean, vowing to move forward without the Democrats if necessary. Great. The fabled Fox will be guarding the Henhouse. Isn't "vowing to move forward without Democrats" the biggest "partisan political game" of all? Can anyone honestly expect objectivity from a 100% Republican panel? Are they seriously going to try to convince America that that's in our best interest? That this stacked jury could conceivably convict Bush on any level?

In order to join the House-Senate Committee, Pelosi and Reid are demanding an equal number of Democrats and Republicans. They're also asking Congress to appoint a panel of non-lawmakers similar to the Sept. 11 commission that investigated the 2001 terrorist attacks. That commission handed up a detailed summary with critical suggestions for shoring up homeland security, although it fell short of finger-pointing.

With perhaps 10,000+ dead, a major U.S. city decimated, and an estimated $200+ billion rescue, relief and rebuilding tab ahead, Americans deserve answers, accountability, and a plan; a plan not only for revitalizing the Gulf, but to assure that a catastrophically inept government response like we saw last week can never happen again. If history is any indicator, GOP lawmakers will do whatever necessary to compromise these goals with more smoke and mirrors. Andy
Posted by The Ostroy Report at 7:32 AM