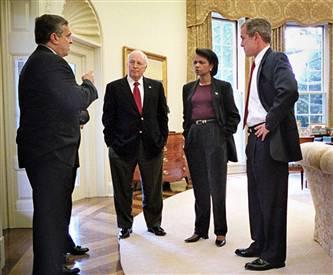 It's been six days since hurricane Katrina unleashed its wrath, turning Louisiana, Mississippi and Alabama into a living hell. As we now know, the U.S. government failed miserably by slashing funding to safeguard the region with adequate Hurricane protection systems, and then compounded this with an embarrassing and shameful inability to rescue, evacuate, shelter, feed and care for its citizens once disaster struck. The government's response and relief effort was utterly disorganized, woefully inadequate and incredibly late. As former Speaker Newt Gingrich said, "As a test of the homeland security system, this was a failure." Much of the blame lies with the president and his top officials for an unprecedented lack of leadership and planning. Let's begin with Bush. Often criticized for his handling of national crises, his initial reaction in Katrina's aftermath was no surprise. He was slow to respond, lacked the gravity of the situation, and was emotionally detached. He actually played golf the day after the storm hit. In just the last couple of years, Bush has cut virtually all of the funding for the Army Corps of Engineers' SELA projects to upgrade Louisiana's levee systems and conduct critical research studies despite dire warnings from the Corps about the vulnerability of the levees and the need to bolster them. Yet Bush, to ABC's Diane Sawyer this week, claimed "I don't think anyone anticipated the breach of the levees." He's also neutered FEMA--the Federal Emergency Management Agency--by stripping it of much of its disaster assistance grants, and merging it with 21 other agencies into the newly formed Department of Homeland Security under Michael Chertoff, with much of the former FEMA money earmarked to fight terrorism. FEMA, led by Michael D. Brown since 2003, was an embarrassment this week, a shell of its former self under the leadership of Clinton appointee James Lee Witt. Unlike Bush, who has reduced FEMA to a shell of what it once was, Clinton made it a cabinet-level agency. Witt is hailed as being an efficient, organized leader who strengthened the agency's proactive planning mechanisms as well as its response and relief execution. Conversely, the inept Brown late Thursday evening admitted to CNN's Paul Zahn, and later to ABC Nightline's Ted Koppel, that he and the agency had just learned that day that 20,000 evacuees were trapped in the New Orleans Convention Center, and barely existing under unfathomable inhumane conditions. Said an incredulous Zahn: "Sir, you aren't just telling me you just learned that the folks at the convention center didn't have food and water until today, are you? You had no idea they were completely cut off?" And then from Koppel in disbelief: "Don't you guys watch television? Our reporters have been reporting about it for more than just today." But that didn't stop Bush the next day from handing out undeserved accolades at his ill-timed Mobile, Ala photo-op: "Brownie, you're doing a heck of a job." Even in this time of national catastrophe, Bush chooses to spin and deceive, and inappropriately toss folksy nicknames. Let's also not forget his imperialist flight over the devastated areas earlier in the week, after he was forced to end his mammoth vacation, rather than land the plane and lead the victims. Or the fact that, when he finally did make it into the ravaged streets four days after the storm struck, it was curiously timed to coincide with the first military convoys of relief supplies (apparently Karl Rove's still pulling the presidential strings). Or what about the Mobile "briefing" where he lavished praise on Republican Governors Bob Riley of Alabama and Haley Barbour of Mississippi, who in turn told Bush what a great job he was doing. Or how about his lame comments at this briefing about Sen. Trent Lott's destroyed vacation home, and America's need to send in "cash money" for the Hurricane relief effort to help the people in "that part of the world." And most of all, let's not forget for one second the quagmire in Iraq; the unjust, elective war that Bush got us into, and how the draining of our financial and military resources there was abundantly clear here this week.

The next question that begs to be asked is, "Where the hell is VP Dick Cheney?" Rumor is, he's still vacationing in Wyoming, if you can actually believe that. The U.S. is grappling with the worst natural disaster in its history and our vice president is AWOL (runs in the White House, I guess). We have not seen or heard from Cheney all week. Not once. Can he really still be on vacation? Is he that indifferent to the catastrophic human suffering that's going on? Is he holed up in a bunker again for some reason? Is he...dead?. The American people deserve to know.

Lastly, as if all this wasn't enough, it's good to know our Secretary of State Condi Rice was safe from the death and destruction and out of harm's way, holed up here in New York City in the shelter of various high-end retail stores and in Broadway theatres. I guess when the going gets tough, the tough head to shoe stores and "Spamalot."
Andy
Posted by The Ostroy Report at 9:32 PM

Former Consultant to StarNet Wireless Brushes Off Its 15-year-Old Owner
Here's an interview with someone who formally worked with Jordan Dice , the 15-year-old who ... (9/3/2005) Live from the internet, its your best of Weblogs, Inc.
Interesting ….. I'm definitely going to bookmark you!
vonage the broadband phone service company

Since you are not giving an "F" on the report card of the N-O mayor, and to the La. Governor your "F" for Bush Alone cannot even be considered serious. It is pure partisanship and exploitation of those poor victims.

To the author, dead on point again. Keep up the good work... To Popeye... What would you give the Mayor of New Orleans and the Governor of Louisiana "F"s for? Did you assume city and state governments would be able to handle the situation until the feds decided to show up? They did everything that they could. The US government has it hands full with this one, so it is obvious that city and state governments would be overwhelmed in very short order.

Rebel, see my blog about the buses that I calculate the mayor could have evacuated 42,000 people with. You are so willing to give the state and local a pass with "they did everything they could" but somehow at the federal level you won't say "they did everything they could". State and local are always first responders and they did not seem to respond. They seemed to just wait for the feds. Again the one note "blame Bush" crowd

Thanks Rebel. Glad you appreciate the writing/reporting.

To All I Can Stand: The Mayor of N.O. deserves an F? You are heartless, negligent of the facts, and devoid of reality.

Please supply facts I am missing. And let's see, I give mayor "F" and I am heartless. You give Bush an "F" and you are not. You get an "F" in logic.

The mayor missed an opportunity to use hundreds of buses for evacuation per the pre-disaster plan. Thousands more would have been gone before Katrina hit.

The mayor realizes this blunder and is now apologizing for his disrespect to Bush.

Look, blame can certainly be placed all around, including with the Mayor. However, had he done what you said with busses that would only have made a small hairline dent. This was a disaster of catastrophic proportions, which could only have been preoperly dealt with by the federal government. The Mayor does not have authority over National Guard, Army, FEMA, federal funds, etc. The MAyor did his best with what he had and under unbelievably tragic and dire circumstances. Don't compare him and his resources to Bush and the Fed.