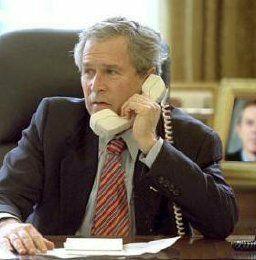 The Bush administration can't seem to stem the tide of negative press lately, fending off ethical and criminal charge after charge. The latest salvo came yesterday when the Government Accountability Office (GAO) issued a scathing report accusing the Bushies of violating the law when it bought favorable news coverage last year while promoting its education policies. Not a good couple of weeks for the Bush posse. With Delay's indictment, Frist's SEC probe, Abramoff's indictment, Safavian's arrest...what's next, jaywalking for George?

The GAO, an independent non-profit auditing arm of Congress, charged that the Bushies paid right-wing talking head Armstrong Williams for a series of phony articles and TV appearances plugging programs such as No Child Left Behind that constituted "covert propaganda," an activity that's been banned by Congress. They also charge that the Bushies hired public relations firm Ketchum, Inc. to scour the media's coverage of Bush's/the GOP's education policies and use Williams as a counter to anything negative. The administration, together with the Education department, also created and issued a carefully scripted, prepackaged "video news release" touting Bush's education accomplishments. At the end, the narrator signs off with, "In Washington, I'm Karen Ryan reporting." And they claim they weren't trying to fool anybody?

At issue is the government's failure to state its involvement in the video's production and distribution. And while such notice is not required, the GAO said "The failure of an agency to identify itself as the source misleads the viewing public by encouraging the audience to believe that the broadcasting news organization developed the information. The prepackaged news stories are purposefully designed to be indistinguishable from news segments broadcast to the public. When the television viewing public does not know that the stories they watched on television news programs about the government were in fact prepared by the government, the stories are, in this sense, no longer purely factual. The essential fact of attribution is missing."

In what has now proven to be yet another in a never-ending series of lies, Bush in January defended his administration from the controversy as it became public: "We will not be paying our commentators to advance our agenda. Our agenda ought to be able to stand on its own two feet." And there's WMD in Iraq...Social Security's bankrupt...blah, blah, blah. Doesn't this guy ever get tired of telling lies?

Overall, the administration's acts of propaganda carry no penalty. Just a mere wrist slap to the White House and a memo reporting it to Congress. But it's another blow to a previously untouchable administration, and the dominos continue to fall. Andy
Posted by The Ostroy Report at 7:59 AM