The Court Pick: Will Bush Pander to Right or Go Centrist? 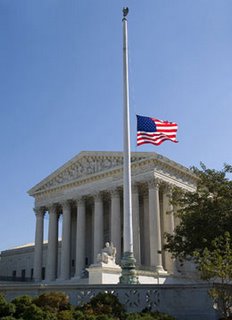 It's expected that President Bush will announce early this week his next Supreme Court pick following the embarrassing defeat of his Harriet Miers nomination. But just what Bush's next move is is anyone's guess. Will he attempt to mend fences with his hardcore conservative base and name an experienced judge in the mold of Antonin Scalia and Clarence Thomas, as he promised during his 2000 campaign? Or will he make a bee-line for the center and attempt to unite the parties? Conventional wisdom says the latter, given the political hailstorm the White House is facing right now with scandal, policy failure, an unpopular war and precipitously declining poll numbers. But this is Bush we're talking about. His arrogance, stubbornness and intense loyalty to the base will likely result in a radical right-winger being nominated. Much speculation is on either Michael Luttig or Samuel Alito as the president's top two choices.

Alito, 55, is so close in ideology to Scalia that he's often referred to as "Scalito." He currently sits on the 3rd U.S. Circuit Court of Appeals in Philadelphia. Luttig, 51, is also firmly in the mold of Scalia--whom he clerked for when Scalia was an appeals court judge--and serves the 4th U.S. Circuit Court of Appeals in Richmond, Virginia. Both judges would surely satisfy the far right-wing of the party; those who wish to see Roe v. Wade overturned.

If Bush goes in this direction, the Democrats are sure to wage a holy war and filibuster the nominee, which could set off a bloody showdown in which the Republicans, led by Majority Leader Bill Frist, could drop the "nuclear bomb" and change the rules so that only a simple 51 vote majority would be needed to end the filibuster and bring a cloture vote. But the Republicans, who've just savagely opposed Miers and forced her to withdraw, would have a hard time using the advice and consent/"up or down vote" defense. The GOP never allowed Miers that same opportunity.

Also, with Bush using Miers' religion as the cornerstone of her "qualifications," the Repub's will also have a hard time preventing Dem's this time around from engaging in their own own religious tests.

To be sure, Bush cannot afford another battle and additional political fallout. But that's never stopped him before from making some really bad choices. Stay tuned.
Posted by The Ostroy Report at 6:32 PM

What? I don't believe there is such a thing as a moderate or liberal republican..There is not an ounce of difference in all of them>>

Well, the guessing game is over. Bush naturally pandered to the Reich-wing. So far right the guy's around the corner.

His nickname is Scalito or Scalia-lite. I guess it's war.

Actually now that we know more about Miers, it appears that nomination was pandering to the left. Now he does the right thing by selecting a Constitutionalist, not an activist. What more can you ask for?

And Matt Grunge is actually playing the 'ethnic card' already claiming that all critics of Scalito are anti-Italian.

Dean said something about his failure to win convictions of high-profile mob figures. That may be true but if he failed and his name was, say, McDuffin, would Matt Grunge still have his 'prejudice' card to play? I doubt it. It's pure Rovian talk point.

Other than pointing out the hypocrisy of Democrats, the Scalito reference and Italian reference to the failed mafia prosecution (as if success in those is high - not) is lame and meaningless. Dems claim to be for minorities (ethnic and otherwise) yet they are the worst when it comes to ethnic and religious bigotry.