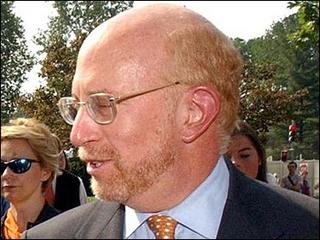 Matthews: "Does she support abortion rights?"
Ginsberg: "I think that's a fair question to be asked of her, but her record indicates she's been a solid member of the pro-life movement."
Matthews (quite incredulously): "Really? Is that your experience in talking to her?"
Ginsberg: "I've not talked to her about the subject but I've seen where she's given money and I've seen the causes that she's worked with and she took the courageous stand of going up against the weight and authority of the American Bar Association to try to get them to change their opinion on the subject."

Wow, this is a pretty amazing revelation from a straight-shooting White House insider and Bush loyalist. So where there's smoke, there's fire.

What's interesting as well is the overall negative reaction from both the left and the right. Democrats obviously are operating in a vacuum on Miers' positions on everything ranging from right to privacy, abortion and school prayer to states' rights, religious displays, affirmative action and school integration. Sen. Dick Durbin (D-IL), member of the Judiciary Committee, said to Matthews: "She has a very limited record to make a judgment on." What Senators do have is nothing more than Bush's personal word that she's the right person for the job. To the conservatives, he's saying 'she's one of us.' To liberals, he's saying 'don't worry, she's another O'Connor, and you'll be happy with her.'

No one's buying these words of comfort though. To hard-line conservatives like Buchanan, she's a political enigma and a dangerous threat to the master plan. On Bush, Buchanan said: "I think he's taken a tremendous risk for himself, and quite frankly, a tremendous risk for our cause and movement. We've been waiting 12 years for this appointment, we're on the verge of recapturing the Supreme Court for constitutionalism, and I think the president may have blown that opportunity." Like his pals on the right, Buchanan is most concerned with the obvious lack of documentation and paperwork relating to Miers' philosophy on the hot-button issues. "An opportunity of a lifetime will be lost, and it was an unnecessary risk," said Buchanan.

The White House has made it clear it will not release any documents, or recommendations Miers made to Bush while his personal or WH counsel, as requested by Senators. The Roberts confirmation hearings was smooth sailing as compared to what the Miers hearings promise to be. Stay tuned. Andy
Posted by The Ostroy Report at 7:26 AM

Well, gee, why would the man, who was on the White House campaign payroll in a prominent role, who facilitated the unconscionable Swift Boating of John Kerry purportedly leak such a "fact" as that that Harriet Miers is a pro-life activist? Could it be that Rove instructed him to get the word out in order to tamp down the rebellion within the Christian conservative base? How could it not?

Abortion is frankly not the issue. Miers and Roberts are both supporters of a uber-strong executive branch, and Bush ensures for himself ultimate authority to torture at will, render unto oblivion, pre-emptively declare war anywhere in the world -- so long as any action he takes receives the ultimate blessing of the Supreme Court.

Please, don't follow the bouncing ball. Connect the dots. Don't dig to the heart of the matter at hand only to get hung up on a detail.

Bush used and abused Christian conservatives to the end that he retain his seat on top of the heap, and they naively trusted him. He has no intention of amending the Constitution to outlaw gay marriage. He really couldn't care less. He really doesn't care about prayer in the schools. It was all smoke and mirrors. Hocus-pocus.

Rove sent Ginsburg out to throw Christian conservatives a bone and quiet them down long enough to get Miers confirmed for the S.C.