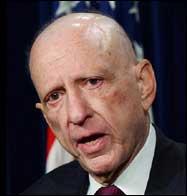 Sen. Arlen Specter (R-PA), chairman of the Judiciary Committee, plans to investigate whether Supreme Court nominee Harriet Miers, Karl Rove or other White House officials gave assurances to Focus on the Family head Dr. James Dobson that Miers would vote to overturn landmark abortion ruling Roe v. Wade if appointed to the court. Speaking on ABC's "This Week with George Stephanopoulos" Sunday morning, Specter, along with the committee's ranking Democrat Sen. Patrick Leahy (VT), vowed to investigate the charge, and will question Dobson, Miers and anyone else who they believe could help uncover the facts. Both he and Leahy said Dobson could also be called to testify at the committee's upcoming hearings.

In a radio address to his followers last week, Dobson raised pro-choicers' ire when he intimated he knows how Miers would vote on Roe: "It was leaked to the media that I've had conversations with Karl Rove and the White House, which is true. But I have not revealed those conversations, and the media is trying every which way from Sunday to get me to address the conversations. When you know some of the things that I know that I probably shouldn't know...you will understand why I have said, with fear and trepidation, that I believe Harriet Miers will be a good justice." Coming from the evangelical, right-wing ideologue Dobson, this is code language for...Miers will vote to overturn Roe.

On Rove and Dobson testifying, Specter said he's listed 30 possible witnesses and divided them equally between both parties. Stephanopoulos asked specifically if Dobson is on that list and if so would he be called to testify. Specter joked that perhaps Leahy will call Dobson, then grew very serious when challenged again: "Now wait a minute. If Pat Leahy doesn't call him, Arlen Specter may. I want to know what all the facts are. I'm very fact-oriented, and if Dr. Dobson knows something he shouldn't know or something that I ought to know, I'm gonna find out."

Leahy concurred: "I can tell you one thing right now. If assurances were given of how any nominee--whether this nominee or anybody else--if somebody gives assurances how they're going to vote in an upcoming case, I would vote against that person"...and he said that all 100 Senators should vote against confirmation as well. He added that the committee will call whichever witnesses necessary to determine the facts. Stephanopoulos: "We can assume that they're (Dobson and Rove) going to be questioned by the committee? Specter: "You bet."

In ackowledging Miers' tough road ahead, Leahy and Specter underscored the opposition from both sides of the aisle over her lack of judicial, and more important, constitutional experience: "I have no problem taking somebody who's not been a judge," said Leahy. "We've had some tremendous justices who were not there. I think the problem...the president says she's the most qualified person in America to be on the court...she says the president is the most brilliant man she's ever met. It's not being partisan to say there are some Americans who don't agree with either statement." Specter is quoted in a front-page NY Times story today that Miers "needs a crash course in constitutional law."

Leahy said Democrats will continue to push the White House for documents covering Miers' service as Bush's White House Counsel, while Specter said those documents are protected under executive priviledge. Both Leahy and Specter said they will ask for Miers' law school transcripts. "Academic standing is relevant," said Specter.

Should we ultimately learn that Miers' grades were as unimpressive as Bush's while the president studied at Yale, their mutual admiration society should then come as no surprise. Brilliant birds of a feather flock together. Andy
Posted by The Ostroy Report at 10:54 AM

I liked this:
Stephanopoulos: "We can assume that they're (Dobson and Rove) going to be questioned by the committee?
Specter: "You bet."

I feel Specter is doing a good job as chairman of the JC.