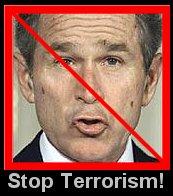 What a coincidence. Yesterday we learned that Karl Rove's headed back to the grand jury to testify again in the CIA leak investigation, and that as many as 22 indictments could be forthcoming in a matter of days. Delay, Safavian and Abramoff have been indicted; Frist's being probed by the SEC; and Bush's approval ratings have pathetically sunk to 37%. The White House is knee-deep in muck, plagued by controversy, scandal and embarrassment. So as the saying goes, when the going gets tough, the weak and immoral talk terrorism. It's right out of the Bush/Rove/Cheney handbook, and it's what they do best. How many times have we experienced the Bush bait and switch game before?

It's no surprise then to find on the front page of today's NY Times two lead stories regarding terrorism; one concerns yesterday's heightened subway alert in NYC and the other has Bush praising himself over the US's 10 thwarted terror plots since 9/11/01. It's also not shocking to see CNN and other news outlets focusing much of their airtime today to terrorism. Americans should be outraged; livid that the fear-mongering Bushies continue to use the threat or terrorism as a ruse to distract and deflect attention away from their colossal policy failures here at home and abroad. It's reprehensible, it's treasonous, and it must stop. Bush, Rove and Cheney are the biggest terrorist threats facing Americans today. Andy
Posted by The Ostroy Report at 6:51 AM

These scum bags have no shame. They keep going back to the one game they know so well FEAR the problem is the news hounds eat it up.

Tune into CNN watch Wolfe Blitzer and his 24 hour non-stop FEAR SHOW. No one can milk a "non story" better then the Wolfe Man.

Honestly - I absolutely loathe these people. How any sane, intelligent person could possibly continue to support this administration is beyond me. And yet I have no problems whatsoever saying loudly and proudly that my conscience is clear - I didn't vote for the idiot.

The shrinking polls don't, unfortunately, change anything because we have to put up with Bush and his disgraceful, pathetic administration for over 3 more years (God help us - no one else has the power to).

Well, the right wing hillbillies can "stand by their man" if they like, but I for one have washed my hands of it. I am an American, yes - a proud one. But I am disgusted and embarrassed that we are respresented by the single worst administration and "commander-in-chief" that this country or this world has ever known.

There is nothing any conservative can say at this point that will ever rectify what this man has done to this country and its people. We are pitied by the rest of the world. Our economy is non-existent. Our dollar (which used to be the strongest) is now the weakest compared to other countries around the world. We continue to waste our money on a war that should have single handedly been the death of this adminstration (once the truth came out). But no - as usual, the Republicans get a free reign to victimize and terrorize the American people time and time and time and time again - with no remorse and no conscience.

America has become a frightening terrorist organization by the hands of one man - George W. Bush - and I hope he's proud of himself. He is terrorizing not only innocent victims in Iraq but also all of us right here at home. Now, would you like me to tell you how I really feel? Thank you as always, Andy, for sharing the unbiased truth that is our present, unfortunate, reality. You are a voice of reason in a time of chaos and I for one appreciate it greatly.

I was heartened to see MSNBC last night calling the Bush admistration to task for the coincidence, but I can find nothing about it on their website. I believe it was on the Keith Olbermann show - perhaps the transcript will be online by Saturday.

The fear tactic has worked starting with 911. That was the wake up call. These "Skull and Bones", "Cap and Gown" behind the scene folks really have the power.
We need to focus on the key story in all this stuff; The unanswered questions of 911. However frightening it is, we need to step up and ask the questions; Did our own government have a hand in 911?. The 911 truth movement is gaining some momentum, jump on board and seek the truth. One website has 16 videos. Open question911.com and click downloads. Try those for starters. There are quite a few books on the subject and most ask the same questions. However, there are no pro 911 Commission books backing the report and debunking the theories or answering the questions. That in itself is a red flag. Once you take the 911truth plunge, all this other stuff will seem trivial.

He can't distract from anything because people disapprove of everything he does. He doesn't have a 50% approval rating in any category.

And let's not forget the Washington Monument Moment...I'm convinced someone from the WH called that one in...

Diversion and deflection...Those are tactics behaviorally challenged folks use. I'm beginning to wonder if Bush's drinking was/is self medication for a personality disorder. The timing is beyond obvious for the terror attacks. It's like the kid who keeps saying his imaginary friend stole the cookies from the cookie jar. This has got to be embarrassing for educated Republicans. It's even more upsetting that America appears to be run by such a bunch of out-of-touch thugs. They don't know when to quit.