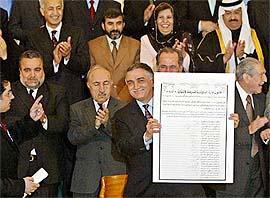 It appears likely from early election returns that voters--including many Sunnis who were expected to vote No--have approved the proposed Iraqi constitution. On paper, it's a victory for President Bush, who called the apparent victory "progress towards peace." Bush has been a relentless, and often delusional, cheerleader since his vanity invasion in March 2003. But what ultimate effect the constitution will have on the country's move toward a real democracy is yet to be seen. More likely is no real democracy at all but instead an unstable country ruled by Iran-style religious clerics who'll be anything but friendly to the United States. Further, what effect it will have on America's ability to withdraw its troops is the biggest mystery of all.

The constitution, which falls far short or real rights protections for women, minorities and secular Iraqis--provides Iraq a framework for governance and the rule of law. Key provisions, as outlined in USA Today's coverage, include:

1. Government: "The Republic of Iraq is an independent, sovereign state. Its system of government is republican, representative (parliamentary), democratic and federal." The Baath Party and other groups promoting racism, terrorism or ethnic cleansing are banned.

2. Regional autonomy: The Kurdish area of northeast Iraq and its regional government is recognized. More autonomous regions can be approved in the future.

3. Individual rights: Iraqis have equal rights under the law, regardless of religion, sex or ethnic background. Among those rights are liberty, equal opportunity, security, personal privacy and privacy in the home. The state guarantees freedom of expression, including freedom of the press and freedom of assembly.

4. Islam: Islam "is the official religion of the State" and "a fundamental source of legislation." No law may be enacted that "contradicts the established provisions of Islam" or "contradicts the principles of democracy." Full religious rights are guaranteed to minorities.

5. National identity: Iraq is "a country of many nationalities, religions and sects," language inserted to satisfy non-Arab Kurds and Christians. Iraq also is declared "part of the Islamic world" and "a founding and active member of the Arab League," wording to ease Sunni Arab fears that the charter would dilute Iraq's Arab identity.

6. Women's rights: Men and women have the right to "participate in public affairs," vote and hold public office. Women are guaranteed one-fourth of parliament seats. However, some women fear language granting a major role for Islamic law will erode their rights in such areas as divorce and inheritance.

7. Oil wealth: Management of current fields must assure "balanced development" throughout the country; new fields must be managed to achieve "the highest benefit to the Iraqi people." Still, some Sunnis fear most oil revenue will go to Shiite and Kurdish areas, where most of Iraq's oil fields are.

8. Amendments: A parliamentary committee will consider amendments during the first four months of the next legislative session, a provision added to encourage the Sunni Arab minority to end its insurgency and take part in politics. Amendments need two-thirds approval in parliament before going to popular referendum.

It's this last provision that is most dubious, and was a last-minute bargaining chip in eliciting support for the proposed constitution from some key Sunni leaders. In essence, the constitution is little more than a short-term referendum that could either change dramatically in four months or be the cause of an intensified insurgency if changes are too little.

Should the constitution be officially approved, the country will choose a new parliament in national elections Dec. 15, and the legislature will select a new Iraqi government to take office by Dec. 31.
Posted by The Ostroy Report at 7:23 AM

Andy, what is dubious about #8? The part about the insurgency ending? Or the part about being able to add amendments? Both sound good to me. The addition of amendments must go through a voting process just like amendments in the US constitution. Why is phased and steady progress frowned upon?

When liberals criticize elections and a significant step of voting in a constitution they tip their hand that in reality they yearn for democracy in Iraq to fail. Hence the need on the day after this historic vote to trounce on its significance. After all the constant push by liberals and their water carrying mainstream media to paint a picture of failure in Iraq can't lose ground now.

This vote was a significant step and the world body should set aside their partisan fantasies and give encouragement to the Iraqis for the progress they have made. What is most likely to help this process succeed? Encouragement or criticism? The answer is obvious, but liberals have too much invested in an Iraqi failure to actually want to help them.

I feel happy that people who live in Iraq can vote.

I feel sad that they bear a 25% inflation rate, a 30% unemployment rate, and generate for their entire country, which is about the size of the state of California, the amount of electricity that one US college university uses in a year.