Can Bush and the GOP Survive Without Rove? 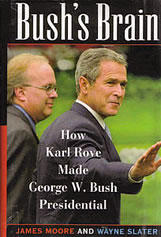 Karl Rove, White House Deputy Chief of Staff and top advisor to President Bush, heads back to Pat Fitzgerald's grand jury this week to testify for the fourth time in the CIA leak investigation. It's quite feasible and perhaps likely that Rove will be among several Bush aides to be indicted when the investigation concludes, possibly later this month. The $64,000 question facing the Republican Party is this: can it survive without the man they call Bush's Brain?

Rove has faithfully and dutifully been attached to the Bush family's political hip since the early days in Texas. His climb up the ranks began at the age of 21 in the 1972 Nixon re-election campaign, working for dirty-trickster Donald Segretti, the top White House operative responsible for vicious smear campaigns on Nixon rivals including Edmond Muskie, George McGovern and George Wallace. Rove's skills didn't go unnoticed. A year later, Rove became chairman of the College Republicans when George Herbert Walker Bush was chairman of the Texas Republican Party. Rove also learned the tricks of his trade early on from Lee Atwater, who managed Rove's college campaign and went on to become the attack dog for the Reagan/Bush team. Bush 41 later hired Rove to run his failed 1980 presidential campaign, and he's been working with Bush Jr. since his 1993 Texas gubernatorial run.

Over the years, Rove has been connected to several acts of political chicanery targeting clients' opponents such Paul Wellstone, Tom Harkin and former Texas Governor Mark White. In the latter case, White ran against Rove's client Bill Clements, a Republican. Prior to a highly anticipated debate between the two candidates, Rove called the media to report that his office had been bugged, claiming, without proof, that it was the White camp who was responsible. The story distracted attention from the debates, Clements won, and Rove's political capital soared. However, the police ultimately determined that it was Rove himself who most likely planted the bug. And in the 2000 and 2004 presidential elections, Rove was the engine behind the potent smear campaigns against John McCain, Al Gore and John Kerry. In short, Karl Rove is a man who will do everything in his power, and then some, to get his clients elected and keep them in power. And that's exactly what has Bush and the GOP worried. He's been the master architect in virtually every Bush/GOP victory for the past 5 1/2 years and beyond.

As conservative activist Grover Norquist put it: "If you could clone Karl and bring in someone who had his talent and instincts, but not the relationship with Bush, it would be 50-60% as good."

To be sure, the success of George Bush and the GOP to-date has been inextricably tied to Rove. But with the CIA leak scandal hanging over him like an ominous cloud, some say Rove has been greatly distracted and marginalized, which could be why the president's popularity has dropped precipitously, and why his response to crisis and controversy has been inept at best. The Bushies have had a major PR fallout over Hurricane Katrina and the Harriet Miers Supreme Court nomination, for example, and Rove's lack of focus is a likely reason. How much longer they can float up the political creek without their paddle, Rove, is anybody's guess. Andy
Posted by The Ostroy Report at 7:17 AM

The on-air pundits keep claiming that democrats hate Rove because he's been successful never mentioning the unscrupulous conduct behind that success.

Rove is diminished and finished, even if he's not indicted. Which I doubt he'll get a free card from Fitzgerald. Too many people KNOW he's a slimeball politician now. No Republican in their right mind is going to put him in a leadership position. Oh wait, maybe Republican politicians don't have right minds, because how else do creeps like Rove get to the White House. Greed and corruption are such seductive masters.