The Miers Nomination: Where the Hell are the Democrats? 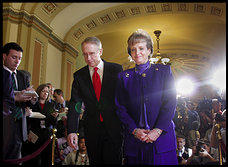 President Bush's nomination of conservative crony Harriet Miers to replace the retiring Sandra Day O'Connor on the Supreme Court set off a hailstorm of protest not from the Left, but from Bush's own party. The chorus of disapproval comes from politicians, pundits and evangelicals alike. Right wing stalwarts in the Senate including Trent Lott (MI), Tom Coburn (OK) and Sam Brownback (KS) have expressed strong opposition and said they're likely to vote no. Grover Norquist (Americans for Tax Reform), Gary Bauer (American Values Coalition), Rush Limbaugh, Laura Ingraham, Bill Kristol, George Will, Pat Buchanan, Ann Coulter and others have pounded the table in opposition as well. They're hammering Bush for nominating an unimpressive, unqualified blank-slate mystery-woman like Miers instead of a diehard conservative with solid bench experience such as Priscilla Owen, Janice Rogers Brown or Edith Jones who will further the Right's radical conservative agenda. It's not that they don't believe Miers is pro-life; they want certainty, not mystery. To say they're livid with Bush would be a gross understatement. As Buchanan said last week, "we've waited 12 years for this appointment," and the president is blowing "the opportunity of a lifetime."

Despite the opposition from many of the Right's most influential voices, many key evangelicals like Pat Robertson (Christian Coalition), Richard Land (Southern Baptist Convention) and Dr. James Dobson (Focus on the Family) are in full support of Miers, with Dobson dubiously inferring to the media last week that he's been "assured" by Karl Rove and the White House that she's solidly pro-life. Land and Robertson have also stated their confidence in Bush's decision and with Miers' likely position on abortion.

So where the hell are the Democrats? Why are they silent? Where's the aggressive opposition to the evangelical Miers, someone who has Bush's trust and faith; is most certainly pro-life (which is why he chose her); and who has the resounding support of some of the most anti-abortion militants in the country? Why is the Left sitting back and reveling in the Republican-on-Republican battling instead of diving in head first to defend liberal ideals and women's reproductive rights? They caved on John Roberts Jr. and vowed to wage war on the next Bush appointment. Where's the fight? When do the Democrats stop being the spineless, namby-pamby minority party and start standing up for what they believe in?

You want to talk opportunities of a lifetime? For the last 5 1/2 years, the Bushies have given Democrats everything they could possibly want: failed war, weak economy, woefully inadequate disaster preparedness, multiple scandals and presidential and congressional ineptitude. We have more rallying cries than we dreamed of. So when do we start rallying? When do we stand up to the Right and say enough... we're not going to let you destroy the country any longer. And we will not allow you to turn the Supreme Court of the United States into an evangelical playground. Sen. Harry Reid, if you're listening, get off your ass and start fighting. Andy
Posted by The Ostroy Report at 7:31 AM

It is not looking good for the Dems when they have others doing their fighting for them. It makes them look both weak and arrogant at the same time. Not winning traits.

The Democrats really need to establish themselves as something different--an actual opposition--before they're going to be able to persuade any disaffected Republicans or fence-sitters. Why would people change their vote when one party sits and does nothing? Also, the Democrats are doing a sound job of pissing off their own base.

I can understand their feeling that maybe we should let the Republicans hang themselves with their own rope and that Americans tend to shy away from very confrontational "mud-slinging" politics and that the Democrats don't have a lot of options being the minority in the executive and legislative branches. But we've tried letting the Bush administration collapse under scandal, and I think we've learned that there is nothing so evil or incompetent that these people can't get away with. Time to stand up, speak out, and offer America a better alternative.

The best way to show your displeasure in the Democratic party is to let them know it. When I get the many fund raising envelopes I simply write in nice BOLD print that I will not give one cent until my party starts earning their keep. Most envelopes are post paid and the ones that are not I'll spend the 37 cents for a stamp. I also keep all of the email addresses in my contacts for instant emails to vent my feelings. Does it do any good, who knows but I feel better doing it.

I'm gettin tired of looking for the Democrats to come out fighting. I'm thinkin about a third party - any Democrat who believes as I do has to have SOMETHING to hang onto.

Good comments here. Until we Democrats can get down in the trenches and fight like dogs like the GOP does we'll be spending a lot of years crowing about how the republicans in power are inept. But they'll still be in power. As much as it burts me to say this, if the Miers thing is any indication of how Dem's seize an opportunity, we're screwd.

Until we Democrats start fighting.... Don't make me laugh.
Dems are spineless cuz thay can't stand to be 'mean spirited'. The Repugicans are sleazy cut-throats using fairy tale religion to keep the idiot americans in their mindless stupor and it's working marvelously. The Dems haven't figured out how to counter it. They don't have a fairy-tale big enough. The boogeyman has already been invented by the GOP and the Dems are buying into it too. It's profitable to wage war everywhere.

How many Dems have money tied up in Haliburton too, or GE, Martin-Marietta, KBR, et al. I'd sure like to know that. The GOP is comprised of professional criminals. The Dems are still amateurs.

Even if they get into office, it'll take 50 years to undo what Bush has destroyed in the last 6.
America is gone. The Constitution we knew is dead. It's police state coming down the pike and the Dems will roll over just like they did with the Downing Street memos.

What this country needs is a SECOND party.