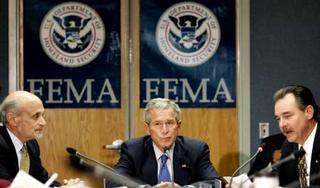 Take a good look at this recent picture. It's the new face of President Bush. He's lost his cocky swagger, and instead looks weary, worn out and just plain fed up. And that's exactly how he appeared before the cameras at today's press conference. Facing reporters' questions about a host of fiery issues including his appointment of Harriet Miers to the Supreme Court, Bush looked as if he's slept two hours and would rather be home napping with Barney. He did not assume the posture of a confident, energetic wartime president who's also facing several pressing domestic issues. Seems like the air has finally been let out of the Bush arrogance balloon. The mojo has left the building. Lame duck? More like dead duck. Only no one's told him yet. Andy
Posted by The Ostroy Report at 12:25 PM

Andy, this doppy look just drives me crazy. How in the world could ANYONE think this guy is worthy of being the president? When I taped the debates last year I could not believe his expressions and yet nothing was said how stupid he looked. Remember the device he had strapped to his back and there again NOTHING was done about it to reveil that he was being prompted for his answers. You would think that the media would finally grow a set and start speaking out about this drunk we call president.

The sad thing is that after he's OUT of office we'll hear all the stories about his drinking and mental health, too little too late.

Napping with Barney or with Jeff Gannon?

Yep, too many troubles, no political capital left so he's fallen off the wagon and is hitting the sauce again. Maybe he should get his nose back in the bag again for that extra lift. I bet his daughters could help him score.

He thinks it's bad now wait until Rove and Libby get indicted than he'll have a real reason to hit the bottle.

great catch, thanks. He does look, um... a little pre-occupied? and a wee bit depressed. tee-hee-hee

Hubris always comes into play with the politically arrogant

Whoa, the monkey's looking confused and defused, ain't he? If he weren't such a turd, I'd feel sorry for him...Corruption is extremely worrisome, I'm assuming.

Hey, if you want to do more good than sending relief to Katrina victims, send a bottle of Jim Beam to the worthless chimp, and send the loser over the edge. He's been hitting the bottle for some time now. Martin Sheen was right. Dumbya is a "white-knuckle drunk!"

Come on, folks. He probably just needs a restroom break.

Let's just hope he doesn't do anything too stupid out of desperation. A cornered weasel is the most dangerous.

Considering Bush's stupid and disjointed remarks during that first debate ("It's hard work!"), I can't believe that any of his advisors were feeding him lines. Rove & Hughes are smarter than that. Unless there was static on the airwaves or Barney was speaking into the mic.

But I did read not long ago -- somewhere in the mainstream press -- that the device was more likely a portable defibrillator. Junior inherited a heart condition from both his parents, and the outline of the wires and other creases in his suit exactly matched one of these devices.

So it isn't true that Bush doesn't have a heart. He does, and it's just as defective as his brain.

I can't believe this loser is the President of the United States--he's a whiney, petulant drunk! Anyone with half a brain can see he's on something--don't know if it's pills or booze or if he's just lost his mind. Get serious--do we REALLY want this demented half-wit to be the one with his finger on the trigger? Wait, I lost my mind--Cheney is the one with his finger on the trigger--and he's 10 times more dangerous because he has no soul. Bush has no soul, but he has no brain, either. So he's no threat--it's his Mafia buds Cheney & Rove that are the dangers. We and the world are screwed!!!!

Glad to see we have such witty readers! Keep writing, and keep me laughing. Thanks!
Andy

It feels like it should be year 7.5 already...but it's only year 5. Looks like someone's got a case of the Monday's...and Lord knows he's not the only one.

You guys are some funny bloggers. I'm busting a gut reading this stuff. I feel like a Republican or a teenager or something.
I think you all are right about the substance abuse and the boozing. This guy is hung looking.
I noticed during the debate that he kept blinking his eyes when the was trying to listen to Rove through that wireless box antena strapped to his back.
The main reason nobady really wanted to expose this guy for using the box is because it is so emberrasing. Reagan was pretty stupid too, but he could memorize his lies better than Bush.
The other problem is that Bush has to be extremely careful in what he says. There are so many scandals a slip of the tongue could bring light to a whole series of events.

It's the same look of BOREDOM he's carried through numerous recent public appearances.

And we're all in DEEP SHIT.

I know that look. I have seen the last days of sanity seeping through saggy eyes and witless expressions. I think it was hitler in the bunker, yeah yeah thats the ticket.
Let's just hope he doesn't do too much damage before the wheels become completely detached.
Someone needs to sneak up behind him and unplug his tube.

Hey, here's an idea: if everyone that reads blogs like this one sends a gift-wrapped bottle of Thunderbird, or Night Train, or Boone's Farm to 1600 Pennsylvania Ave, we could have thousands--no millions-- of bottles of wino wine piling up at his front door!

Pass this suggestion around, and see what happens!

Hey, if you had Brownie on one side and Chertoff on the other how would you look? Which one's the biggest bozo in that troika is a tough call.

How about a frog march as a 12 step program to impeachment?

Friends once asked me how I could detest someone and his various shapers and handlers so much, and I remember saying that I didn’t because “detest” is too weak a word.

Lame duck president? That would be far too kind, almost complimentary.

Dead duck? Too light-hearted, almost like a bad episode of "Friends."

No, my friends, the DinC (Doofus in Chief) is a now a "Texas Roadkill President."

Now, the true vultures of the Republican party are going to start circling the carcass of his presidency, looking for whatever political scraps they can use to salvage their majority.

Good photo. More evidence of this man's phsical and mental deterioration. Have you ever seen the look of a bully on the playground who is not getting his way because the smaller kids are finally standing up to him? Have you ever seen the face of an alcoholic who has fallen off the wagon? Bush is exhibiting all the signs of these two kinds of men.

Back when Paul Martin became Canada's PM, he and W met at Monterey Mexico. The news photos at the time show them laughing and the body language says that shrub was being the life of the party. One particular shot, by the looks on their faces, shrub had just cracked a dirty joke and Martin is busting up despite being embarrassed. The first impression I got from the pics was that they had been drinking together the whole weekend and Martin was trying to keep it together in public while shrub was cracking him up. Had the flavor of frat-boy.
That box on the back thing, medical device is far more likely than com gear. Commercial prompters can be the size of ear buds, the spooks probably have even smaller stuff. The bulk was either batteries for a defibrilator or IV drugs, like anti-convulsants, remotely triggered if W has an "episode" on the podium.
He's not stable in the best of times, he's hermeticly sealed into his bubble because contact with the real world, actual people, different opinions, send him off the deep end. No one dares bring him bad news, he screams and throws things and this is (nominally) the most powerful man in the world.
His reign will end before 2008, As Joe Shmoe pointed out, rove and libby going down will really rattle his cage. But watch out, even after the sword has pierced the dragon's heart, the thrashing tail can still be deadly.
Peace
CV

Several weeks ago at the zoo, behind one of those window displays of chimps, I observed a chimp hunkered on a tree branch jerking off frantically. His simian face had that same expression of boredom!

When I look at Chertoff, BTW, the name "Dr. Death" comes to mind.

Once again, Johnny Favorite gets endplayed in New Orleans.

It's not just him: I look like that too, it's 5 years of that idiots policies bearing down on the both of us......