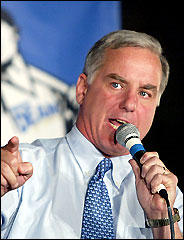 While the war in Iraq has become highly unpopular among a majority of Americans according to recent polls, many, including Dean, believe the bigger opportunity for Democrats next year is using Bush's own 2000 campaign mantra of "restoring honor and integrity to the White House" against the party and its incumbents. Not only has the Bush administration not fulfilled this promise, but it's gone recklessly, irresponsibly and arrogantly in the opposite direction.

"You can't trust Republicans with your money," said Dean. "Not only can they not handle, in terms of driving up huge deficits, but it turns out they're also putting it in their own pockets. Nobody likes corruption. Not conservatives, not liberals, not Democrats, not Republicans." The Democrats' firebrand voice in Washington was referring to, among other current GOP scandals, the free junkets and travel lavished on Delay and his aides by recently indicted lobbyist Jack Abramoff; Delay's fundraising schemes involving TRMPAC-raised cash that was laundered through the RNC and returned to Texas Republicans running for re-election under Delay's 2004 redistricting map; and the allegations of Frist's insider-trading activities involving family-owned HCA Corp. shares.

The stink in D.C. is certainly putrid these days. Whether the Dem's can turn it into a coherent, effective and winning campaign theme is yet to be seen. Andy
Posted by The Ostroy Report at 6:28 AM

Personally, I'd like to see the Democrats take a more vocal stand on explicit issues, like the Iraq conflict (How do the 2 parties differ right now?), abortion (and privacy in general), social programs (Bush has Clinton beat on spending on things like education and Medicare). And what is the Democrats energy plan? I really want to rally behind them, but...

I like your last sentence, Andy. Coherence is key.

Gouda, Only in my fantasies will the Dems be vocal and coherent in their agenda. If they were truthful, clear and public about their true agenda, the GOP would have even larger victories. Dems can only win by hiding what they are or being outright deceitful. Remember Bill Clinton's campaign pledge to give the middle class a tax cut. After 30 days in office it was "I've tried harder than anything in my life, but I just can't do it".

Remember all the promises that The Bush Crime Family made in 2000 and again in 2004? Which ones were ever made and passed that helped the average "Joe" improve their lives? The tax cut was ONLY for the wealthy and now we have almost a 550 billion red note hanging over our heads.

The Dems can do better and WILL with Dr. Dean at the helm. The 2006 elections are going to be a real wake-up call for the GOP and there WILL be a Democrat in the White House in 2009.

Sorry, I DO KNOW for which I speak. We have a deficit because we have taken away the very income this country needs to prosper and it's called taxes, even this you should be able to understand but then again MOST Republicans don't. Reducing taxes means something has to be cut and for everyone it's been services and it all came out when New Orleans flooded because there was no money for the levees. This is one very sad way for the "sheep" of this country to see just what Bush's tax cuts have done.

When you add tax cuts to record spending on pork projects, an invasion of a souverign country you get a record deficit PERIOD!.

As is the case with all government funding so little of it actually gets to what it is intended for, but pieces of it get pocketed along the way. With so much waste and fraud, we do NOT have a lack of revenue. Get the waste CUT and there is plenty of money without raising taxes.

The best way to handle this is to get the Federal Government out of being the pocket book for all the programs. The best example is Education. Why should money come from each state to the "Mother Flagship" only to get redistributed back to the states. Get the Federal Government out of Education altogether and have each state take care of its own systems. There would be much less opportunity for it being stolen in transit and much more accountability. This is only one example of many.

Amazing how much stock you libs put into the sovereignty of Iraq, but none in the US as you are always ready to give it away to the UN.

I never fails that the ONLY statement that has come out of you is the never ending rant of "You don't know what you're talking about". Change the record for crying out loud and stop talking out of your butt.

You Republicans always talk about getting government out of our lives but here we have a pResident and congress that does just the opposite. We have a bigger govenment and a bigger debt thanks to YOUR pResident.

You don't like government, well maybe you'd like private companies to take over the fire department, police department, parks, schools, and the courts. Oh wait a minute, the courts are private now with Bush's buddies there.

Give me some departments you'd like to be private? You talk a lot but have yet to say ANYTHING that makes sence.

You did not read my post Johnny. I said the Education should be handled by the states not the feds. YOU changed my words to include the word "private" which is nowhere in my post. Probably much of what I say does not make sense, because you do not read it.

I don't like big Federal government. Those on your list are state or local government run. But thanks for the idea. It does not make any sense to funnel money to Washington only to come back to the cities to fund Fire Departments. Neither does it make sense to do that with schools.

Oh, "Stands", what do you base your comment about Education being handled by the states on? Is this more blowing smoke or do you have factual information that indicates that states do the best job of governing and funding education? I'm with Johnny, Change the record, or come up with some verified facts... Your posts are sooo booooring

Anon, I'm sure you are bored with everyone who disagrees with you. Some things are axiomatic. Such as 'the shortest distance between two points is a straight line'. Well, my point is axiomatic: the less hands money goes through, the less stolen or wasted. It is not even arguable, so if you don't get that I won't waste my time giving you numbers you won't get either.

You can't give numbers because you don't have any. If your bio said that your profession is education, then perhaps your comment could be valid. Federal education programs, such as Special Education, have legal rules on how the money is to be spent. States and school districts must comply with these or face the possibility of fine or imprisonment. If states and school districts are left on their own, there is a good chance that monies will not be spent on the customer(parents and students). An example of this is one I witnessed as an federal programs educator. In 1998, I walked into a classroom in Utah (rabid Republican state, by the way) and saw that the dictionaries provided were 1964! editions. Therefore, any words about computers, technology, medical breakthroughs, rapid transit, and other new innovations were missing! I was told that there was NO monies to buy new dictionaries, yet, the same school district offices were being heavily rennovated and getting new cushy furnishings! You see, the direct money line broke down because there was no oversite on how money should be spent, at least in that instance. Where is the balance? Who knows. No Child Left Behind was supposed to help, but is meeting with partial failure because, while mandated, it is not fully funded by the Bush Administration. States and school districts are now slashing budget items, such as sports, the arts, educational assistants, and remedial programs, to keep from going bankrupt. If local tax monies from a community went directly to schools in the area, maybe, the chain would be short enought that budgets could be watchdogged. Otherwise, the feds need to still be involved.