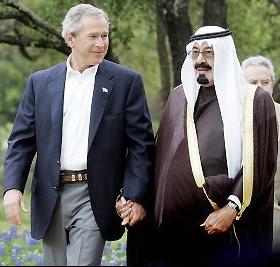 It sure does pay to be a pal of President Bush these days. If you're Michael "Brownie" Brown and Harriet Miers, you can get cushy jobs at the White House, FEMA and possibly the Supreme Court. Or if you're Saudi Arabia, you get a pass on financial sanctions previously levied for failing to stop the slave-like trading of prostitutes, child sex workers and forced laborers.

According to the State Department, as many as 800,000 people, mostly women and children, are traded and trafficked across the borders of countries all over the world each year, while others are lured with false promises of work or other benefits.

The Saudis, despite an inadequate response to U.S. pressure to adequately address the trafficking problem, were given a pass on financial sanctions. The Saudis are oil-rich pals of the Bushies and have close economic and military ties to the U.S.

A total of 14 countries, including Sudan, Bolivia, Venezuela and Cambodia, had been warned back in June by the Bush administration to take appropriate measures to curb trafficking or face stiff financial penalty. However, most still receive all or part of their aid. Only Myanmar, Cuba and North Korea have been completely cut off from certain kinds of foreign aid in this effort.
Posted by The Ostroy Report at 12:52 PM

Gouda said...
This comment has been removed by a blog administrator.
11:10 AM

To curb slave trafficking, the UN could place export sanctions on Saudi Arabia? A country that possesses a quarter of the world's petroleum reserves wouldn't be allowed to sell them?

I'm not sure who that would hurt more. I have a feeling China would veto it.

It's sad how oil is becoming the lynchpin for policy decisions.