Amazing Stats on Red-Staters and Internet Use 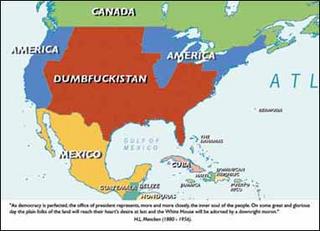 Though it should come as a shock to no one, more Kerry-voting blue-staters have high-speed internet access than their red-state Bush-loyal counterparts. Leichtman Research Group's recent broadband report found that at the beginning of 2005, "broadband penetration of households in the U.S. stood at close to 29 percent nationwide, and that disparities in penetration are largely related to variations in household income across the states, which are strikingly similar to the state-by-state splits in the 2004 presidential election."

"It should come as a shock to no one...." ...that Democrats have earned a reputation as elitists.

Now if someone could tell me if those in the Red states will come to their senses after Roe v Wade is overturned? As far as I'm concerned, Rove v Wade was lost in November 2004.

So what happens after the pro-life cause has been met? Will we be able to move on?

Joseph, wow. We agree on something.
Cathy, IMHO, Roe will never be overturned regardless of who sits on the court. Abortion may not get federal funding and little girls who require parental consent to take an aspirin at school may have to have permission for an abortion, but abortion will never wholesale be made illegal.

Never say NEVER This administration has a "Master Plan" that they wanted so bad they had to steal the 2000 election and since it was not completed in the 4 years of screw ups they had to do it again in 2004. These people are dangerous people and you can not trust them. Look how everything they have done has been for THEIR good nothing for the average people of this country. No new programs, no programs at all in fact for the "un wealthy" of this country.

...not surprising at all. Neocons are getting their "information" (LOL) through the MSM filters, all controlled by the very people who got Bush elected in the first place.

Heh heh heh. Well done. Though it seems otherwise there are quite a few of us in the trenches here. Keep up the good work.

Hi catnapping. Can you hear me? What a surprise to find you here. Great minds and all that.