Bill O'Reilly: Miers a Victim of Persecution Against Christians 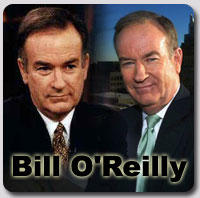 If you're Bill O'Reilly, you believe that Democrats cannot get behind Supreme Court nominee Harriet Miers because she's a devout Christian, and Republicans are against her because she's not Christian enough. According to O'Reilly in his The Coming Faith Wars column Friday, Miers is the victim of the rising persecution against practicing Christians in America today. O'Reilly even claims that the chorus of disapproval in Washington over Miers is exclusively due to her religious beliefs and practices. This persecution of Christians, he suggests, is widespread and only getting worse. Forget the fact that most of our leadership--Bush, Cheney, Rumsfeld, etc--as well as the Senate, Congress, the Supreme Court, the media and Americans overall are mostly made up of Christians. We live in a Christian country, with Christian beliefs, Christian culture, public Christian religious displays, and Christian holidays, all of which dominate virtually every fabric of our society. So where's this alleged persecution coming from, other Christians? Jews? Muslims? Atheists? Hare Krishnas? Is O'Reilly suggesting that a Jewish woman with the same credentials as Miers, or lack thereof, would sail through the confirmation hearings and be gleefully embraced by pols on both sides of the aisle? Of course, this contention is about as preposterous as the other daily muck that spews out of O'Reilly's mouth and keyboard.

Rather than attempt to stir up trouble where none exists (America is divided enough right now, thank you), people like O'Reilly need to grasp the fact that Miers is lacking in support because she is lacking in credentials. Plain and simple. We in this country certainly have had zero problem electing and appointing Christians to virtually every major position of power possible. It's ludicrous to even have to defend this reality. Let me remind O'Reilly that John Roberts Jr., quite the practicing Christian, was recently confirmed as the high court's new Chief Justice. So it cannot be Miers' religion now, can it Bill? Perhaps it's her gender? (nope, Ginsburg and O'Connor kill that theory). Or, maybe it's that her name is Harriet? Or that she has bad hair or that she looks like she eats little children? Or maybe, just maybe, it's because she has about as much reason to be named to the world's highest court as my lawyer pal Glenn (GK...that's a compliment to you, good buddy!). Andy
Posted by The Ostroy Report at 2:10 PM

O'Reilly is like a bad screenwriter who hopes to solicit emotion from a contorted plotline.

Keep an eye for the next time he mocks some self-pitying member of a group railing against their own persecution to see how inconsistent he is.

When are people going to realize that their emotions are being manipulated?

What would be good for the country is enough people tuned him out. How can we each help make that happen?

I do not believe GK should ever be considered as a Supreme Court nominee. He reminds me too much of Tucker Carlsen for my comfort.