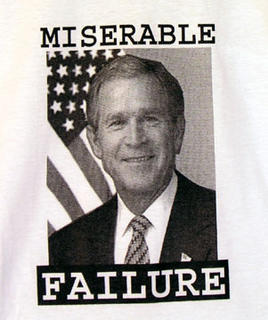 The sinkhole that President Bush and the Republican Party finds itself in these days is getting deeper and deeper. In a new USA TODAY/CNN/Gallup Poll released today, Americans' dissatisfaction with the administration and with the GOP-controlled Congress is increasing, with the current crop of scandals making it much harder for Bush to accomplish anything in his second term.

-Poll finds next year's mid-term elections will be the hardest on incumbents since 1994
-54% polled say they'd vote for an anti-Bush candidate
-46% say most members of Congress deserve re-election
-50% say Bush lacks the personality and leadership qualities of a president
-42% approve of Bush's overall performance
-43% are against the Harriet Miers nomination to the Supreme Court, the first time in twenty years that a plurality has opposed the confirmation of any high court nominee.
-Almost 25% believe the Bushies committed crimes in the CIA Leak case, with another 40% saying they acted unethically but not illegally.
-57% say the Iraq war is going badly.
-55% would vote for an unnamed Democrat vs. Bush if he was up for re-election this year.

Certainly not a healthy report-card. And one can only imagine what these numbers will look like should the CIA Leak grand jury indict Karl Rove, Scooter Libby and/or other White House officials this week.
Posted by The Ostroy Report at 10:20 AM

This is why the ’04 election was such a heartbreak for many of us. We knew this day would come when many of the ignorant uninformed dumbasses that voted for the CHIMP would see the Monkey Show for what it was. But alas it is to late now and we have another three years.


So my dear friends of reason and thought that have known the truth about this administration since day one, when the indictments come down that is when we should double our efforts to expose the LIES and kick these bastards while they’re down and don’t stop until G.W. Bush is nothing more than a bad footnote in the political history of the Republic. Let’s all take a page if not the whole Rove Playbook for the next three years and let these evil and lying bastards have it..cause soon he won’t be needing it.
Rest assured if the shoe was on the other foot the GOP would not hesitate to do the same to their enemies i.e. US.

Joe you're right on. I feel that right now the Dems are smart letting things run there course, after all if the Dems started up right now the GOP would make that the big story and hence take some of the heat off the real problems the Bush Crime Family are in. However the minute this all reaches a plateau where there is no more free fall of the GOP, is when the Dems need to get busy and make sure the free fall continues until the GOP are buried. If the Dems fail to do this the sheep of this country will soon forget what happened and the Bush people will have "another" staged terrorist "accident" and try to rally the sheep back to their side.

The GOP has a plan that started right after Clinton beat Bush 41 and since the re-election of Clinton in 96 the Bush people would do ANYTHING to get elected not only once but twice. Is it only me or do others see a pattern on what has happened since Bush 41 took office? These people are hell bent on finishing there "master plan" and I'm not real sure yet what it is but you can see they have one but never thought they would be stopped so soon in the second term.

Why? do we still hear people excusing thier actions They caused deaths to many people because of their lies .I sure hope they get them all .Is it like the prison mess just the few get it. Mor e getting caught every day.