Texas Republicans Ok With Corruption But Not Gay Marriage 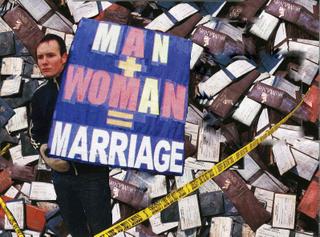 On November 8th Texans will go to the polls to vote on Proposition 2, a referendum to change the state's constitution to ban same-sex marriage. The right-wing good ol' boys and gals of The Lone Start State have no problem faithfully supporting crooked politicians like Rep. Tom DeLay and his outlaw posse. Nor do local religious groups, such as the Texas Restoration Project, a network of conservative Christian clergymen and others, who've been pounding the pavement in a fervent get-out-the-vote campaign. Nope, corruption is just fine with these folks. They simply have a problem with homosexual union. In the past year, 14 other states including Michigan, Ohio and Kansas have amended their constitutions to prohibit gay marriage.

After the election last year, the Right gloated in victory: "This issue does not deeply divide America," said conservative activist Gary Bauer. "The country overwhelmingly rejects same-sex marriage, and our hope is that both politicians and activist judges will read these results and take them to heart."

That may be an aggressive supposition, but the Right has certainly been more organized and vocal in its opposition, and has mounted a very successful campaign to constituionally ban same-sex marriage across the nation.

To combat the Texas conservatives' efforts, the National Gay and Lesbian Task Force says it's spent $200,000 to develop commercials against the Proposition, which they'll be running until next Tuesday. The ads feature religious and political leaders, diverse gay couples, and parents of gays.

Perhaps the same zealots who are hellbent on preventing gays from marrying might consider harnessing their energy, passion and resources to keep reprehensible crooks like DeLay and Karl Rove from retaining power and destroying the American political system. They are the real enemy of society, not gays.
Andy
Posted by The Ostroy Report at 11:50 AM

I find it odd that so many religious zealots use a single obscure line from a book of fairy tales to support their stand against gay persons marrying. Apparently, they are unable to think on their own. Yet the very churh which spawned their beliefs and their book is over run with sexual scandal and in particular, pedophilia. The irony is unbearable.

I also suspect that if gay persons are allowed to marry, even if only in civil unions, they might show up the hetro population, 50 % of whose marriages end in divorce. Perhaps that's the real reason for religious loonies fighting so hard.

Same sex relationships have been with the human race since it began. It cannot be supressed or changed by religious nonsense or legal rangling. It's inherent in the human species.

Perhaps we should prevent all those with auburn hair from holding a Phd. Or better, those with green eyes from becoming physicists.

With religions as with governments, people get the form they deserve if they refuse to do anything about it.

Fortunately for gay persons, at the present time -

Why is this such a great surprise?

These self righteous sh&t kickin morons would rather be screwed a thousand ways to Sunday by a corrupt GOP/Whore Politician than allow a productive Gay citizen move onto their block.

As someone that has members of their family from the Godly South it comes as no surprise as these bible bangers are some of the most hypocritical and judgmental clowns you’ll ever have the unfortunate occasion to meet. This is the American Taliban. Disagree with them at your own peril.

Also, it’s been proven without a shadow of a doubt by the Institute of Intelligent Design that the farther south you go the lower the IQ gets.

And with the likes of Gannon in the White House for his dozen or so 'sleep-overs', I don't think the administration has room to talk.