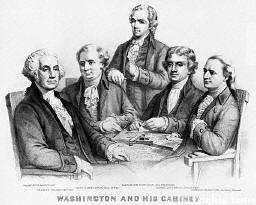 President Bush consistently says he's a strict constructionist, guided by the intent of America's Founding Fathers as the basis for his judicial selections, yet his actions prove otherwise. A review of Federalist Paper #76 shows the writings of the Constitution's framers to be in direct conflict with the blatant cronyism Bush is guilty of with the Harriet Miers nomination. It should therefore come as no shock to Bush that most of Congress--both Democrats and Republicans--cannot get behind her.

The Federalist Papers were a series of articles written under the pen name of Publius by Alexander Hamilton, James Madison, and John Jay. Madison is known as the Father of the Constitution. He later became our fourth president, serving from 1809-1817. Jay would become the first Chief Justice of the U.S. Supreme Court. Hamilton served in the Cabinet and was a major force in setting economic policy. The Federalist Papers were basically created as a PR tool in which to garner popular support for the then-proposed Constitution. The results were hugely successful.

Now consider an excerpt from #76, written by Hamilton, which so fittingly serves as a backdrop to the Miers nomination: ..."To what purpose then require the cooperation of the Senate? I answer, that the necessity of their concurrence would be an excellent check upon a spirit of favoritism in the President, and would tend greatly to prevent the appointment of unfit characters from State prejudice, from family connection, from personal attachment." Therefore a president "would be both ashamed and afraid to bring forward, for the most distinguished or lucrative stations, candidates who had no other merit than that of coming from the same State to which he particularly belonged, or of being in some way or other personally allied to him, or of possessing the necessary insignificance and pliancy to render them the obsequious instruments of his pleasure."

My bet is that this president knows more about "My Pet Goat" than he does the Framers' Constitutional intent. Andy
Posted by The Ostroy Report at 1:31 PM

You got it Andy, only the problem is Bush wasn't reading "My Pet Goat", he was listening to it being read to the kids. Remember how he just sat there with that dumb look and probably wondering why there wasn't more pictures in the book so he could understand the story better.

You got it Andy, only the problem is Bush wasn't reading "My Pet Goat", he was listening to it being read to the kids. Remember how he just sat there with that dumb look and probably wondering why there wasn't more pictures in the book so he could understand the story better.

No. A friend is only a good choice when he/she also happens to be the best candidate for the job. When he/she is not, it's blatant cronyism. Bush is an utter fool for having made this nomination. It just firther shows how little in touch he is with America, Congress and.....REALITY!

Nice Article. I'll be linking here and quoting you regularly. Nice to see an articulate voice on our side.

Wow! You are always SO on the mark, but this time you found exactly what I was thinking, and from our founding fathers, no less. Has this history lesson been shared with our wimpy congressmen?

Of Course he ignores the writigns of the FOunding Fathers. Bush can't read!