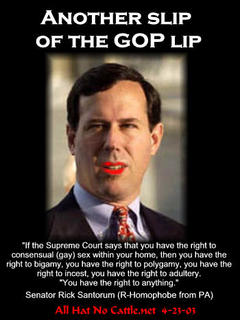 As the November 2006 midterm elections get closer and his Pennsylvania seat grows more vulnerable with each passing day, Rick Santorum, the third most powerful Republican in the Senate, is apparently looking to score points with low-income workers and an electorate growing increasingly angry towards the GOP-controlled Congress. On Wednesday he cast a vote in favor of increasing the minimum wage after having previously voted 12 times against the wage hike. This major flip-flop followed another reversal the prior day with a vote to freeze Congressional wages. Santorum had voted in 2001, 2002, and 2003 against amendments to freeze House and Senate cost of living increases.

"With two flip-flops in two days, maybe we should buy Santorum a diving board," said Jay Reiff, campaign manager for Bob Casey Jr, Santorum's Democratic challenger. "Santorum must be worried about Casey if he's willing to reverse a ten-year voting record on the minimum wage."

Casey, the PA state treasurer, has maintained a steady double-digit lead over Santorum in the polls, and earlier this week announced he beat the incumbent Senator in third quarter fundraising, with over $2,000,000 raised.

The nation's minimum wage has been stuck at $5.15 an hour since 1997. The Democrats' proposal, led by Ted Kennedy (MA), called for an increase to $6.25 over an 18-month period. A Republican proposal provided the same $1.10 increase and added various tax incentives for small businesses. Both measures were defeated.

Kennedy said it was "absolutely unconscionable" that in the same period that Congress has denied a minimum wage increase, lawmakers gave themselves seven pay raises worth $28,000.
Posted by The Ostroy Report at 7:51 AM

Stick a fork in the GOP they are DONE and Ricky and all the rest of those thieves will be out of a job.

There are always peaks and valleys and these bad boys have reached their peak and are going DOWN.

Can't agree with you more!

Raising the minimum wage reduces low-paid work, which may be unfair and exploitative. It reduces the dependency of the low-paid on welfare-state benefits, which may in turn reduce taxes or allow increases of other government outlays. It stimulates economic growth by increasing the purchasing power of workers. It stimulates economic growth by discouraging labor-intensive industries, thereby encouraging more investment in capital and training. It encourages many of those who would normally take low-wage jobs to stay in --or return to-- school and thus to accumulate human capital. It decreases crime by proportionately reducing the attraction of receiving income through the black market.