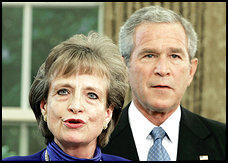 At today's White House daily press briefing, Scott McClellan faced tough questions from the media about President Bush's nomination of Harriet "Clean Slate" Miers as the new Supreme Court justice to replace the retiring Sandra Day O'Connor. ABC's Terry Moran asked McClellan if Bush appointing his personal lawyer, someone with no experience on the bench, is "not the definition of cronyism, what is?" McClellan defended Bush's selection, saying Miers is a highly qualified indivual and cited her impressive list of credentials (that's sarcasm here, folks) which include two terms on the Dallas City Council, a stint on the Texas Lottery Commission, her law career, and years as both Bush's personal lawyer and White House Counsel. By these and similar standards, NYC's Council President Gifford Miller deserves a crack at the black robe.

As Sen. Charles Schumer (D-NY) said today, we know less about Miers than we did John Roberts Jr. And that's quite troubling. She is a veritable blank slate. A Bush crony with no discernible opinions and positions on critical issues like abortion, church and state, school prayer, etc. What we do know about her is that she vehemently fought to defeat a 1992 American Bar Association resolution supporting 1973's landmark Roe v Wade decision. At issue was not whether she herself supported the ruling, but whether or not the ABA should take a position. However, where there's smoke, there's usually fire.

Perhaps as time passes we'll keep learning more and more about Miers and how she may serve the court. Until then, on the surface, her nomination just seems like more blatant cronyism, with Bush rewarding mediocrity with the most powerful positions in the nation. Andy
Posted by The Ostroy Report at 1:07 PM

Andy, on this one I hope your side wins in getting her name withdrawn. She is too much of a risk for my taste. I would prefer a clear and defined candidate so the true debate over the supreme court's role in interpreting the consitution can take place. This stealth stuff completely avoids the high profile debates this country needs.

WHEN will this president stop taking us all for fools? If the Democrats (all of them) don't come down on this nomination then it's time for me to change to the Independent party.

Just what we need, another Republican whacko Texan in a position of power. We saw what happened to FEMA under the watchful eye of his butt headed friend, now this one with no experience as a judge on the supreme court. This presidency is a train wreck, but as long as it benefits Halliburtin.............

Great photo. Talk about the Witch and Dopey.

God, ptomaine for another four years. What have I done to deserve this? I didn't even vote for the son-of-a-bitch.

I read on Yahoo that conservatives are outraged and democrats are cautiously happy... considering all the vague things about this lady, I don't know how they can feel much of anything except confusion.

He might as well nominate Ronald McDonald at this point.

Just a hypothesis. I'm thinking that the fact that this lady has NO qualifications for the Supreme Court, and no means by which to judge her judicial abilities as she has NONE, I suggest the Repugs are putting out Harriet as Filibuster Fodder. If Dems don't filibuster, they get a crony (who thinks Bush is "brilliant") in the SC. If Dems do filibuster and block the vote, the Repugs nominate a deeply conservative judge they can count on and push the Dems into being charged with violating the deal they made on filibustering judges.
That way the Repugs get everything- conservative justice, death of the filibuster for judges- at the cost of a low-level White House lawyer.
Right? Wrong? Stupid?
You heard it here first.

Who does this lady's makeup - did you see the mascara and eyliner????

What else is there to learn about the President's personal attorney who is also connected to Tom DeLay?

This is a filibuster, unless enough of the Dems become DINOs, again.

How in the name of God can the Democrats allow this nomination to go forward?? I mean, what's next? Is bush going to nominate his local grocer for head of the Dept. of Transportation because he knows how to drive to work in the morning??? I am sick of this piece of crap giving important jobs to people less qualified than my 12 year old! If the Democrats don't start showing some backbone and start fighting this nomination, I will personally fight to REMOVE THEM in the next election. After all, if the Democrats have rolled over, why bother fighting bushies? We have lost the war already.

Very insightful. You may be onto something. Gives me a little hope. Unfortunately the Dem leaders seem to like her at the moment, so we may get stuck with her.

I wonder if the suggestion of "fillibuster fodder" isn't very close to the truth. This nomination is so weird, I think theres some diabolical strategy behind it--get everyone outraged over Meirs, then when it becomes obvious she can't get confirmed, he'll appoint some idiot like Priscilla Owens who obviously has judge experience, but is a total idealogue. Or, W thinks the Dems will be so happy to have someone who used to contribute to the Democratic Party, they'll confirm her & then she'll get on the court and be a super idealogue. I'm tired of having a government that's so corrupt, we have be cynical about every move they make because we know they're determined to destroy the country for all but the billionaires.

Heard on Air America news today that Sen. Harry Reid suggested her to the administration!!!
Always knew there was no opposition party in the country. How can progressives ever accomplish anything when Dems are complicit or impotent?

You librul commie pinkos are all the same. Anybody Bush nominates will be a bad call. Look, she's a friend of Bush, she has no experience, and she has a law degree from the 52nd rated law school in the country. She's OVER-qualified! If this country was run by you librul tree-huggers we would be running record deficits, nation-building in the middle-east somewhere, expanding federal government, and paying record gas prices! Oh, wait...

So one of our"Anonymous" folks says "we have (to) be cynical about every move they make because we know they're determined to destroy the country for all but the billionaires."

How short sighted they are. Destroy the Country and what will the billionaires have? 270 million +/- citizens living in such dire poverty they couldn'y buy the products the billionaires' companies' sell?

Hell, we couldn't even buy the TV's to see their commercials!

And yup, most of us spend all our time yapping about this chimp and his handlers (puppet-master cheney and the PNAC), and doing nuttin'
about it.

Woe is us if we all don't get engaged in something opposite the friggin' treasonous repugs. Action not talk.

Hmmmm... I wonder if we could get Michael Jackson to run for president as a de.... nah, the bar is now too low. He could get elected, but he wouldn't take it.

Bill the Fahma in SW Michigan

If a "president" and his cronies are going to be tried for treason under 18 USC 794, with potential for the death penalty, and pardons being legally voidable (be sure to see http://citizenspook.blogspot.com ), or pending some other such reasonable and deserved indictment for many vast and various crimes committed (Treasongate, Votergate, 9-11-gate (see http://911research.wtc7.net ), Downingstreetmemogate, Iraqgate, etc.etc.gate), it would be extremely convenient to have one's own personal lawyer sitting on the Supreme Court. This isn't cronyism. It's the ultimate judicial safety net and regime insurance policy. Brilliant move, but totally disgusting....

Check it out: Since she was/is White House lawyer - those records are privledge : Get Out of Jail card - For Many - GOD HELP US!

Here's the most critical question: how much experience in running horse shows does she have?

You know how the right calls any tough screening of anyone "borking"? Perhaps we should call the continuing practice of cronyism in this administration "brownie-ing".

WHEN will this president stop taking us all for fools? If the Democrats (all of them) don't come down on this nomination then it's time for me to change to the Independent party.
When we stop acting like fools!!!!!

As I said before: When we start acting like fools and sheep. We have to do what we think is the right thing to do, each one of us.
We need to stop paying taxes, stop supporting programs, stop catering to big businesses blindly. We can do without them and create new rules.

Wake up America. Bush is stacking the supreme court in preparation for a constitutional showdown. Patrick Fitzgerald will return conspiracy indictments against the entire top level administration very soon. This is another attempt to YET AGAIN avoid accountability for crims and misdemeanours against the US republic - this time for TREASON rather than just fraud and larceny. Disgusting.

that's the only emotion I have left.

Oh, that and despair..

i don't get it--why would chim-chim nominate his housekeeper?

She needs to be in place to make sure good ole boy Jeb gets his shot as Prez when the times comes.

The fact that Meirs considers Bush "brilliant" clearly indicates that she is not mentally equipped to serve on our nation's highest court.