A White House Under Siege 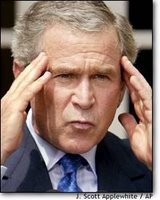 For Democrats, this has been a week to remember. For President Bush, it's been a week he'd love to forget; probably one of the absolute worst in the history of the Oval Office. The Bush administration was dealt another huge political blow Friday with the indictment of VP Dick Cheney's chief I. Lewis "Scooter" Libby. The White House is mired in embarrassment, distraction and scandal including the Harriet Miers retreat, the Tom DeLay and Bill Frist investigations, the Katrina/Rita/Wilma relief failures, the forged Niger/yellow cake documents, and the milestone reached with the 2000th U.S. soldier killed in the Iraq war. And Bush's poll numbers are sinking. It's hard to imagine it getting any worse.

The CIA Leak investigation, led by special prosecutor Patrick Fitzgerald, concluded its 22-month investigation Friday by handing down five indictments to Libby, charging him with two counts of making false statements, two counts of perjury and one count of obstructing justice. He faces up to 30 years in prison and $1.25 million in fines if convicted. Bush advisor Karl Rove was spared for now, with Fitzgerald saying the case was still under investigation. The question remains as to who was the original source of the leak--whom the indictments refer to as "Official A"--of covert CIA agent Valerie Plame's identity to columnist Robert Novak in July of 2003. Much speculation is that Rove is Official A.

In his 2:15 PM press conference Friday a stoic Fitzgerald told reporters: "This is a very serious matter in compromising national security information....but the need to get to the bottom of what happened, and whether national security was compromised by inadvertence, recklessness, by maliciousness, is extremely important. We need to know the truth. And anyone that would go to a grand jury and lie, obstruct, impede the investigation, has committed a very serious crime." Many in Washington still cannot believe that someone as meticulous and obsessively detail-oriented as Libby could end up in this situation. As NBC's Tom Brokaw said, "This is the clumsiest case of lying I've ever witnessed."

But the Republican spin machine was quick to spring into action, criticizing the prosecutor for failing to indict on the underlying charge of outing Plame and instead focusing on the secondary charges. On MSNBC's Hardball, conservative pundit Patrick Buchanan said "It is not a bad thing that (the prosecutor) could not come up and prove the original charge that was made against the White House, against anyone. The underlying charge of deliberately outing Valerie Plame...the prosecutor has come in after 22 months and said, in effect, it didn't happen."

Sorry, Pat, that's not what Fitzgerald said. Buchanan's and the GOP spinners' talking points on this are ridiculous for several reasons. First, they ignore two very important facts: people don't lie, impede and obstruct unless they are guilty and have something to hide; next, what Fitzgerald did say is that he considered indictments on the underlying criminal charge, but that Libby's alleged lies made it difficult to prove intention in outing Plame. Exactly.

And let's not forget that the $60 million that special prosecutor Kenneth Starr spent in the 1990's to investigate the Clintons never ended with criminal charges, only the same perjury and obstruction charges Libby was hit with. But the CIA Leak case, unlike Clinton's ill-advised series of BJ's from an intern, ultimately involves White House falsification of documents and manipulation of intelligence to justify a war, and then lying to cover up the truth. And keep in mind Fitzgerald's investigation has cost U.S. taxpayers just $723,000, not $60 million. Can you say, cost-benefit analysis?

So now we're left with three key questions: where does Fitzgerald go from here, what happens to Rove, and will Cheney ultimately be implicated? If the case does go to trial as most expect, Fitzgerald will have carte blanch through discovery and depositions to dig deeply into the root crime. Many, including Rove and even Bush and Cheney, will likely testify for the prosecution. The trial could blow the doors off the White House.

Rove is by no means home free. U.S. News & World Reports' David Gergen, a former advisor to presidents Nixon, Ford, Reagan and Clinton, said on Hardball "I thought earlier today, wow, Karl Rove dodged a bullet. But you know, the prosecutor is still firing at him...and Rove has been spared for now but I think it's too early to say he's in the clear. There is a shadow there and I'm sure he feels it."

That brings us to Cheney. It's hard to fathom Libby doing anything without it being directed by or known by the veep himself. The indictment says Libby learned about Plame's identity from Cheney. And we now know that Cheney is one half of the "Cheney-Rumsfeld cabal" that highjacked U.S. foreign policy, according to statements last week by Lawrence Wilkerson, who served as Colin Powell's chief of staff from 2001 to 2005. Cheney, the key mastermind behind the invasion of Iraq, certainly had a score to settle with former ambassador Joe Wilson over his July '03 NY Times Op-Ed which refuted the Bushies' claim that Saddam was seeking to buy uranium from Niger. Wilson was sent to Africa in February '02 by the CIA to investigate this claim.

Will Fitzgerald get Libby to "turn?" Facing 30 years in the slammer, will Libby find religion and open the floodgates about his boss, Rove and others? As Fitzgerald said, "This is not over."
Posted by The Ostroy Report at 10:51 AM

"It's hard to imagine it getting any worse."

hard to imagine ?? sorry, we are HOPING & PRAYING that IT ALL GETS MUCH MUCH WORSE for the chimp white house !! we hope & pray that this administration implodes before our very eyes and shows this nation of sheeple and drones and dumbasses and stupid hicks and irrational religious loonies exactly what kind of people these evil traitorous treasonous bastards really are. we hope that the next three years ( unless he is IMPEACHED ) are absolute hell on earth for this administration and to show the amerikan sheeple and drones that they had better wake the f*** up and get with reality.

That pic looks like Bush is hearing the "voice of God" again.

Whew...
I worry about us going into Syria, or Iran.

We are all talk because we played our trump card in Iraq and now the world knows we are weak. We don't have the man power to even take care of Iraq much less New Orleans or south Florida after a storm.

Condi and Chimp can rant all they want but the fact is where would they get the ground troops to take on these counties?