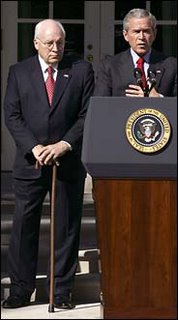 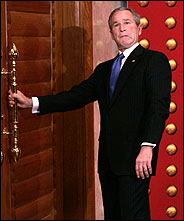 The strain of several failed policies and mounting scandals is starting to take its physical and emotional toll on the president and vice president, who lately seem more anxious for retirement than they do enthused about tackling the legion of domestic and foreign challenges facing America today.

Take Bush for example, who in this picture seems befuddled and totally embarrassed as he searched for an open door that doesn't exist after trying to escape a reporter's dogged war questioning following a press conference in China over the weekend. This is a guy who can't find a successful exit strategy out of a press room and we expect him to come up with one for Iraq? The look on Bush's face could fittingly have a caption above it that reads, "Yes, I am the leader of the free world, can ya believe it? Me neither!"

And how about Cheney, pictured here with Bush while holding onto a cane, the result of knee surgery. Between his knees, his heart and the perpetual scowl on his face, Cheney now seems more cold, disgusted and angrier than ever. When you throw in Bush's recent crustiness during a Latin America trip over having to eat dinner at 10pm and stay up until 2am, and his early exit from his summit the day next because of it, these two don't exactly exude confidence and capability. If they happen to look old, tired and sick of their jobs, it's because they are.

And it doesn't stop there. The fallout from the war, Katrina, Harriet Miers, PlameGate and other botched administration strategies has put a strain on the Bush/Cheney relationship as well. Are they drifting apart? As the NY Times' Elizabeth Bumiller wrote Monday, "Has the senior partner taken the junior partner to the woodshed?" And more importantly she asked, "who is the senior partner, anyway?"

Bush must be livid with "Vice," who, along with his own personal "Cheney,"
Scooter Libby, took it upon themselves to concoct an unjust war and then lied to cover their skeevy tracks, and in the process sent the president's popularity receding faster than Karl Rove's hairline (this is not to suggest Bush's innocence; he himself ultimately lied through his teeth to scare Americans into war). But what did we expect? Everyone joked for years how Cheney was the real president to Bush's veep--as evidenced on 9-11 and in the ensuing days and weeks, when the more important guy was sequestered in a safehouse where Osama bin Laden (remember him?) wouldn't find him. Well, Osama morphed into Saddam, Cheney came out of hiding, and the rest as they say is history. That's what happens when a totally inept, in-over-his-head president hands over the joystick to a war-mongering maniac.

As if they weren't already, the world's leaders must be looking at us and incredulously shaking their heads in amazement as to what's become of the greatest nation in the world.
Posted by The Ostroy Report at 7:14 PM

What have U Got 2 Lose

Except PLUTOCRACY & WAR Itself

Love that picture? Did you see the ones from Mongolia? Even funnier. Check out my site for a few of them and some comments.

Just to make you laugh...and then cringe.

"Cheney now seems more cold, disgusted and angrier than ever."

What has happened to the greatest nation in the world, indeed.

I have felt this way since puppet man Bush was selected by the Supremes.

The days of WINE and ROSES for the lying and corrupt jackasses of the GOP has come to an end.

Wish you guys would connect with Michael Moore to get this show on the road! We need Al Gore(Mr. Clean) for PRESIDENT and your web site is too obscure. I know that Michael could get your site well known. We need a real American in the White House AFTER THE PLACE IS FUMIGATED AND THE BUSH REGIME IS INDICTED AND ""IMPRISONED"" FOR MASS MURDER!!!!!!!!